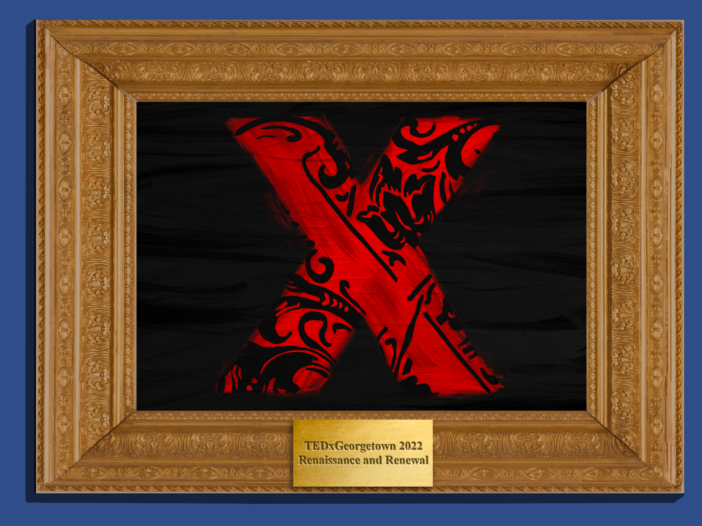 When Kearney Capuano (NHS ’24) set foot on the Gaston Hall stage, situating herself next to the iconic TEDx block letters and reveling in the applause from the audience, she accomplished a lifelong goal — to deliver an official TED Talk.

“I started watching TED talks when I was like eight years old,” Capuano told The Hoya. “I used to gather my family around my living room from ages 12 to 17 to be like, ‘Listen to me,’ give a TED talk inside, make them popcorn and make them listen to me.”

On March 26, 2022, the speakers and audience members flocked to the Hilltop to attend the first in-person TEDxGeorgetown since October 26, 2019. This year’s theme for the student-run conference was “Renaissance and Renewal,” spotlighting the rebirth of passion, art and culture in a post-pandemic world. Highlight speakers included Christopher Bradshaw, Taylor Cassidy, Chi Ossé, Omar Alshogre and Anna Marie Tendler.

Far from a mere series of presentations, this year’s conference theme focused on the collective “renewed interest in learning, discoveries, and the beginning of our new modern world.”

After a series of talks, speakers reflected on how the pandemic gave them time to use their creative abilities to enact social change and explained how reframing perspective could change one’s worldview.

In a New Light

The conference’s larger theme of “Renaissance and Renewal” was divided into three poignant sub-themes, one of which was “Painting a New Picture,” dedicated to exploring the avenues in which individuals can re-format archaic ways of thinking about themselves and the world to hopefully create a more progressive world.

Speaker Anna Marie Tendler, an artist known for her handmade Victorian-inspired lampshades, said the conference allowed her to underscore the importance of facing emotional conflict head-on and discuss the use of art in the face of personal grief and tragedy.

Tendler’s speech, titled “Rooms in the First House,” is a reference to the first astrological house in the zodiac chart. This title also references the photo series of the same name Tendler shot in her house.

In her address, Tendler approached the difficulty of being a woman in a patriarchal society and how to properly confront grief during the process of rebirth. While these processes and internal revelations were forced because of tragedy in her life, Tendler said she is optimistic about the future.

“Imperative is the skill to be alone; to sit with yourself without distraction and to marinate in who you are, both the sweet and the unsavory,” Tendler said in her speech. “Trust me, it’s hard. It’s really, really hard. But ultimately you will be better for it.”

Tendler said her talk emphasized the value of embracing our emotions and teaching ourselves adaptability and resilience, a skill the world recently had to learn during the pandemic, and continues to refine.

“Not running away is the best advice. For myself, sitting in somewhat uncomfortable emotions and head spaces was really necessary to come out on the other side,” Tendler said in an interview with The Hoya. “Both in society and personally, we are told to push our emotions aside or to not experience them — that it will be okay all of the time — and I think not doing so does us a great service. Being able to lean into our feelings and feel it all will leave you with the truth.”

Tendler said she hopes that all women will eventually have the space to express their emotions artistically.

“Women are incredibly complex and filled with so much emotion that is both full of light and incredibly dark — there is a lot of anger and rage. We are entering into a time where that is going to come to the forefront, and there needs to be a space for it,” Tendler said.

Tendler’s artistry was apparent in her address, bringing innovation not just through the words she spoke but how she delivered them, inspiring audience members like Katherine Landler (COL ’24).

“I was surprised by Tendler’s talk because it wasn’t in the format that I associate with a typical TED talk, but I appreciated its artistry, and it felt very poetic,” Landler told The Hoya.

Following the themes of artistry, Nick Cruz Velleman, an artist of Peruvian and Filipino descent who used to teach studio art at Georgetown Day School, delivered a presentation entitled “Paint and Prejudice,” in which he gave the audience an elementary-school lesson on the color wheel and shared insights he gained from studying at an art school in France.

In his TED talk, Velleman discussed the importance of art in daily life and its distinct influence on humanity, especially how the visual arts inform and refine our senses and allow us to more deeply connect to one another.

“Art classes are some of the only opportunities we get to deliberately practice being attentive to what we’re perceiving with our senses without our minds getting in the way,” Velleman said in his speech.

To Velleman, our senses are among the most important things about us, and without art, humanity as we know it would not be the same.

“All human knowledge comes from the senses. Our senses are what connects us to the world and to the present moment.”

While Tendler and Velleman discussed how their backgrounds in art informed their experiences during and after the pandemic, other speakers and student organizers also talked about the pandemic and the trials, breakthroughs and unexpected events that came from it.

Peering out from the side of the stage, David McDaniels (COL ’23), co-chair of TEDxGeorgetown, could see a captivated audience filling the once-empty seats in Gaston Hall and knew, without a doubt, that the challenging undertaking to host this conference on campus was completely worth it.

“It was incredible being back in person. Seeing my family and friends in the audience meant the world to me. After planning last year online, it was night and day having the in-person experience,” McDaniels said in an interview with The Hoya.

For Alexa Hill (SFS ’25), director of human resources for TEDxGeorgetown, focusing on insights gained from the pandemic was an effective way to show a grand return to form.

“All of the talks tended to focus on different talents or different abilities that were harnessed during the pandemic and how isolation made it possible for people to focus on what skills or capabilities they truly possessed,” Hill said.

Another theme of the conference, “Sculpting Innovation,” explored how people in both their public and private lives created change in the midst of the pandemic, reflecting the attitudes of the team behind TEDxGeorgetown.

However, as Christopher Wade (COL ’24) — one of the conference’s internal speakers, who were selected from Georgetown’s community — noted in his talk “Pondering Pandemic Pastimes,” drastic societal changes from the pandemic also occurred at the individual level: during free time away from the world, we confronted what made us passionate and entertained, and that brought all of us together.

“We have sculpted innovation in times of incredible social duress,” Wade said in his talk. “The renaissance of hobbies is a unique social event because it is something that we can all relate to and understand.”

In preparing for his TED talk, Wade was forced to ask himself self-reflective questions about hobby culture and the pandemic’s impact on it.

Not only did the very act of preparing for TEDxGeorgetown push Wade to delve deeper into who he is and what motivates him in his daily life post-pandemic, but participating in the conference and being able to hear from the other speakers taught him lessons he had never learned before.

The COVID-19 pandemic’s continued impact was a running theme during the TEDxGeorgetown conference. Some presenters, like Capuano, another Georgetown student speaker, used their platform to discuss how we can take what happened to us during the pandemic and apply those lessons to bettering the world.

“We need to learn how to do ‘helping people’ better,” Capuano said during her speech.

Her talk, titled “What if we all learned how to best help the world?: Lessons from Effective Altruism,” cited the inadequacy of Instagram activism beyond spreading information and strove to introduce audiences to more concrete, yet still accessible, ways to help others.

“This is the message that I feel like everyone should hear, especially kids at Georgetown who are going to have the power and money to do what they can to help the world,” Capuano told The Hoya. “I feel like we should probably learn how to, and I kind of wanted to spread that message to others.”

Capuano outlined the basic tenets of a philosophy called effective altruism in her talk, drawing references from neuroscience for a discussion of rewiring your brain to seek out opportunities to do good. At the end of her talk, she even handed out copies of a book — “Doing Good Better” by William MacAskill — that personally motivated her to hook others on the idea of effective altruism.

Omar Alshogre (GRD ’24) gave the last speech of the conference, titled “How Did Being Tortured Save My Life?” Alshogre inspired the audience to fight against injustices across the world, like those seen in his birth country, Syria.

Alshogre turned to activism at 15 to protest against Bashar al-Assad’s dictatorship and stand with the Syrian Revolution. At 17, Alshogre was thrown in prison where he was starved and tortured for three years until he was smuggled into Turkey and seeking refuge in Sweden.

Alshogre said his painful experiences have shaped him into the person he is today.

“They showed me that pain could have a purpose,” Alshogre said in his speech. “That it had the power to wake you up, to make you anew. Pain can transform you from a broken, hopeless prisoner to a resilient warrior.”

Alshogre’s rousing presentation on strength, perseverance and unyielding activism inspired audience members like Rachel Tao (COL ’25), who found the conference, and the sentiments delivered from the speakers, to be a resounding success.

“I was thoroughly impressed with both student and external speakers, especially Anna Marie Tendler and Omar Alshogre,” Tao said in an interview with The Hoya. “Having a panel discussion after speeches was also intriguing — definitely interesting to see how speakers with such different ideas and perspectives answered the same questions.”

TEDxGeorgetown’s first in-person presentation since the pandemic proved that “Renaissance and Renewal” are deeply human experiences that every person shares, whether they manifest themselves as newfound hobbies or learning to embrace difficult emotions in the face of struggle.

“I was inspired by the conference because it brought passionate people together to share their ideas and stories,” Landler said.