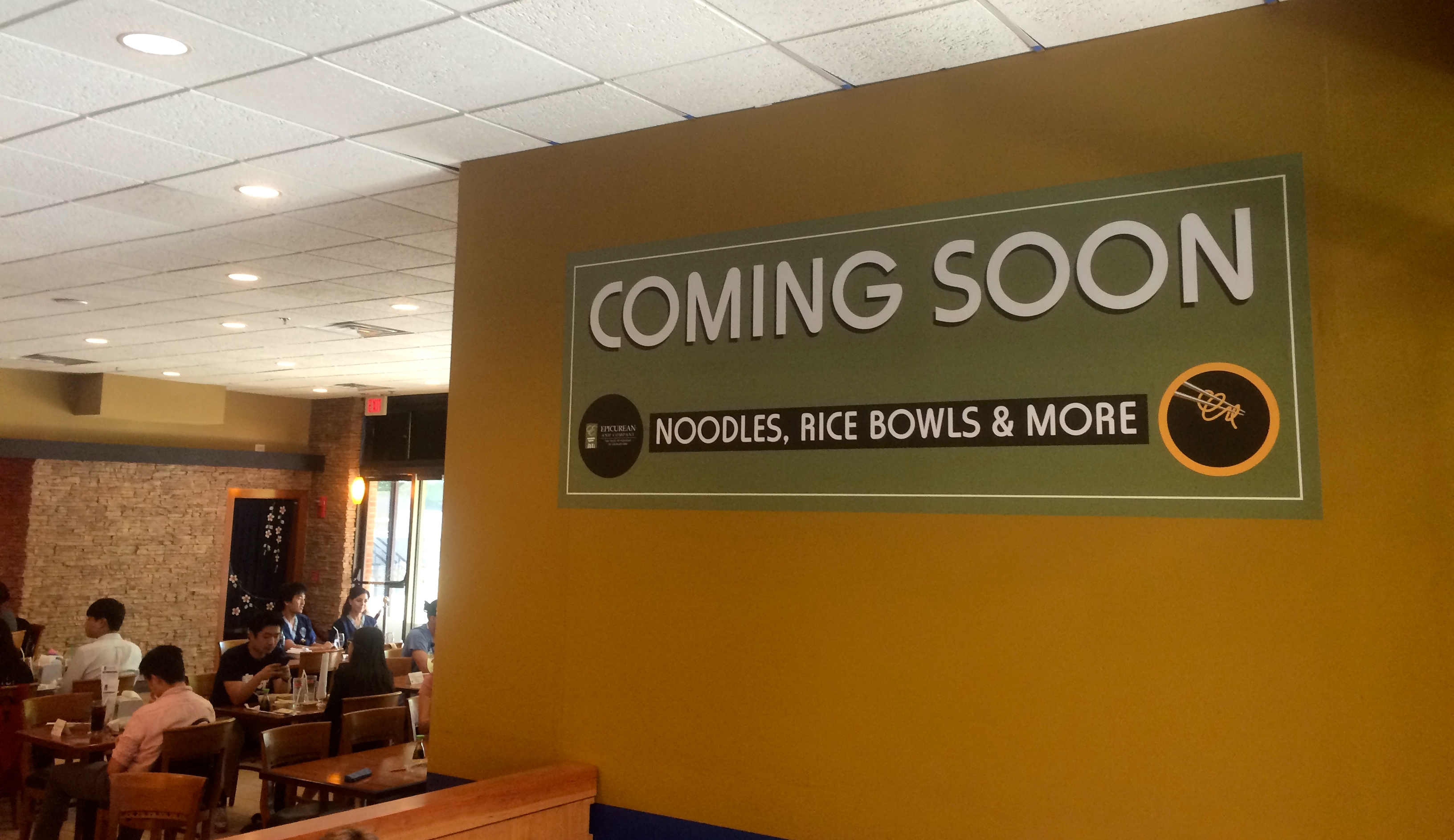 After three months of renovations, Epicurean and Company will open a made-to-order noodle bar this October, offering students a variety of meat, vegetable and noodle dishes.

The noodle bar will be set beside the sushi bar, replacing the hibachi grills that Epicurean once maintained.

Beginning two years ago, Epicurean offered customers a self-serve noodle station with a limited menu, which it closed in December 2015. According to Epicurean General Manager Michael Chong, the small station served as a trial period for the new area of dining. Chong explained that the station’s success showed promise that inspired a wider offering.

“Customers kept asking about [the noodle station], so it was kind of a test to see if it was going to work out or not,” Chong said. “That’s when the owner decided that he wanted to do a noodle bar like that.”

Although the menu has not yet been finalized, Chong said it will most likely include customer favorites such as pho and pad thai. Chong also mentioned stir-fry and customizable rice bowls with toppings as possible menu items, but in general, the menu will include a wide selection of foods with different nutritional values to suit customers’ cravings.

“Hopefully it will be a mixture of healthy and comfort food,” Chong said. “I know I like a little bit of grease sometimes. We just want a wide variety.”

Customers will order via menu screens similar to those that Epicurean already maintains at the deli.

According to Chong, hours of operation for the noodle bar will likely be similar to the lunch and dinner hours for the deli, which run from 11:00 a.m. to 10:30 p.m. If the noodle bar is well-received, Chong entertained the possibility that Epicurean will keep it open overnight to relieve the deli of its nightly strain from demand.

“I think if the concept goes well and people really like it we want to do it over night because it will take the stress off the deli a little bit,” Chong said.

Epicurean chef Sean Han, who was hired by the restaurant two years ago specifically to work in the noodle bar, said the new dining option is a good replacement of the former hibachi grill, which showed lackluster performance.

“The hibachi grill wasn’t really successful and we’ve been thinking of what we can do to better serve you guys,” Han said.

AHL Group Inc., a Maryland-based general contracting firm, has been hired to complete Epicurean’s renovation for a cost that could not be disclosed to The Hoya.

According to Chong, the group will use existing gas lines, electricity and water sources, which previously supported the hibachi bar, for the renovation so that much of the work is cosmetic in nature. Even so, Chong said this construction will be the most extensive the restaurant has seen since its 2008 opening.

“Once the construction gets to the tail end, we’ll probably start hiring people to begin training, probably in the beginning four to five new staff members — maybe a little extra,” Chong said.

Chong encouraged students to email Epicurean or visit the restaurant personally to speak with him or another staff member with further suggestions for the noodle bar’s menu.

“We’re more than happy to find out what students are interested in,” Chong said. “If they have a suggestion, we could try it. And if it works out, we can put it on the menu.”

“I love how diverse the options are here and how the school provides us with the opportunity to try a bunch of different foods and have that range that we can choose what we want,” Keller said. “I think [the noodle bar] is a good addition.”

Natalie Soto-Wright (MSB ’19) said she is happy with Epicurean’s increase in variety.