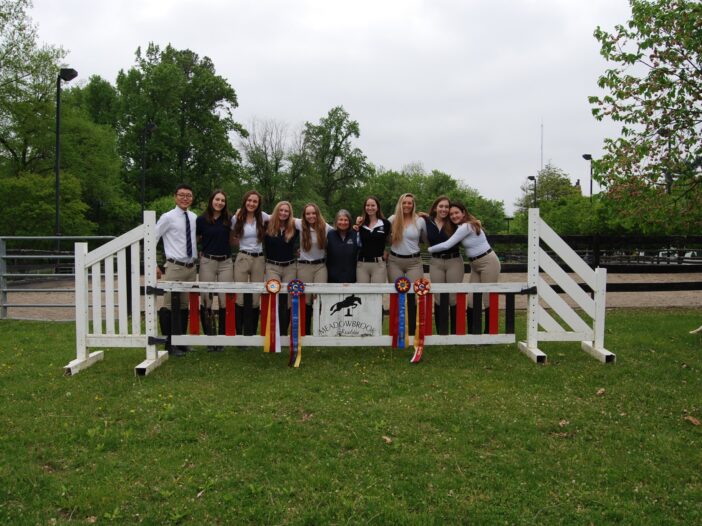 Over 40 horses at Meadowbrook Stables, the facility that Georgetown’s Club Equestrian Team uses, have contracted Equine Herpes Virus (EHV-1). One horse has died from the illness.

The facility, located in Chevy Chase, Md., is monitoring the horses’ symptoms and will remain closed through at least late April. Since Meadowbrook Stables closed March 10, Georgetown’s Club Equestrian Team has been unable to practice at the facility.

Equestrian Club co-captain Hunter Spillan (SFS ’22) said the club is currently unable to practice because the facility has to restart a 28-day quarantine cycle every time a new horse tests positive for EHV-1.

“It’s a full quarantine — horses are not being used at all right now,” Spillan told The Hoya. “It’s pretty tough because it’s my last season, and basically we’re suspended for the time being.”

“The virus can mutate when it’s spread, and there are certain strains that can become neurologic and cause neurological symptoms, such as stumbling and disorientation,” Weinig said. “We’ve never had neurologic symptoms before.”

River, a pony at Meadowbrook Stables, was euthanized March 10 after demonstrating neurological symptoms. Later tests showed that River had EHV-1, according to a Facebook post March 18.

In an effort to mitigate the spread of EHV-1, Meadowbrook Stables quarantined their horses in 24 temporary stalls, while staff members and volunteers continue to take the horses’ temperatures, perform neurological exams and give medications multiple times per day, according to a Meadowbrook email obtained by The Hoya.

Meadowbrook Stables set up a GoFundMe fundraiser March 21 to raise donations to support the barn while it is closed and help pay for the horses’ treatment. As of April 7, the online fundraiser has reached $32,875 of its $85,000 goal.

The EHV-1 outbreak will ultimately cost Meadowbrook Stables about $150,000, according to a Meadowbrook email obtained by The Hoya. Refunding all riders for canceled lessons would cost the barn around $180,000, which could impact the facility’s ability to continue operations, the email said. As a result, the barn will not be refunding riders.

Rather than offer refunds, Meadowbrook Stables’ riders can either opt for a partial credit to be used for future lessons after the horses recover or make a charitable donation equal to the amount of their canceled lessons, according to the email.

Although EHV-1 is common in horses, with most contracting the virus before the age of two, this is the first time horses at Meadowbrook Stables have become sick with EHV-1, according to Weinig.

“We’ve had a potential exposure before and we implemented biosecurity protocols to make sure there were no sick horses and no transmission, but we had no positive cases that time,” Weinig told The Hoya.

Sofia Houts (COL ’25), a member of Georgetown’s equestrian team from California, said this is the first time she knows that horses she rides have been infected.

“The virus has been prevalent for over a year and it shut down a lot of shows in California in the fall,” Houts told The Hoya. “In the past it’s been spread at shows, so if we’ve had horses at our barn who were at a show that the virus was at, we would quarantine them in a separate space, but it never infected my barn.”

Weinig said that most of the horses are recovering well, but Meadowbrook will allow the horses to build up their fitness level after weeks of sickness before resuming the typical lesson program.

The equestrian team hopes that the horses recover quickly and that the team can resume practice soon, Spillan said.

“It’s like losing a pet or a teammate. For some of them it’s fatal, which is really upsetting and scary,” Spillan said. “As a team, we’re really rooting for them and hoping for the best, and thankfully it seems like they’re getting it under control.”