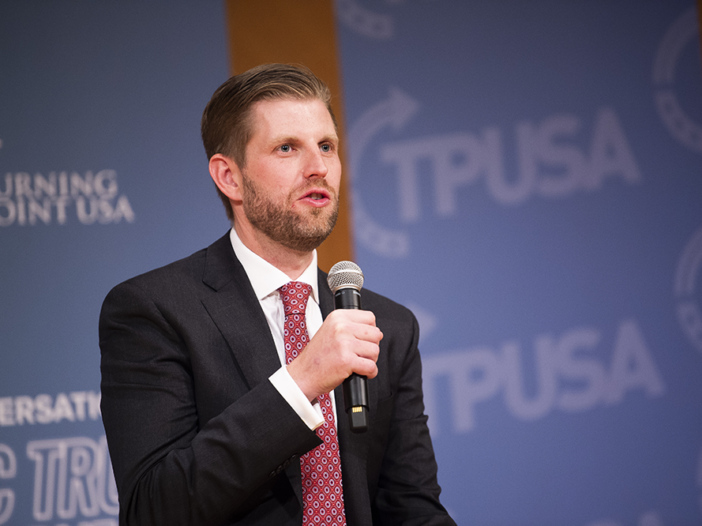 Members of Hoyas for Immigrant Rights organized the Feb. 25 walkout to oppose “A Conversation with Eric Trump and Charlie Kirk,” a talk sponsored by Georgetown University College Republicans and The Georgetown Review. Trump and Kirk reflected on U.S. President Donald Trump’s term in office and made their projections for the 2020 election at the event.

HFIR co-President Sofia Negrete-Retamales (COL ’23) personally participated in the silent walkout to take a stance against people who espouse offensive rhetoric, she said.

“I felt empowered as I knew that I was peacefully demonstrating my stance and making a statement about how I do not wish to hear hateful speech in my campus,” Negrete-Retamales wrote in an email to The Hoya.

GUCR invited other political organizations on campus to attend the event, according to GUCR President Henry Dai (SFS ’22) (Full disclosure: Dai previously served as a sports writer for The Hoya). The protests did not distract the audience from the main goal of the event — to engage in bipartisan discussions on Georgetown University’s campus — he said.

“The protests were insignificant and 30-seconds long,” Dai wrote in an email to The Hoya. “We had an entertaining hour of ideas and questions, and it was truly a lot of fun.”

As the student activists were exiting the auditorium, Kirk insulted the quality of their protest. Trump then told the remaining audience members that the way they present themselves during protests will influence the effects of their advocacy.

“When you see people dressed in orange jumpsuits like they came out of prison, no one is ever going to take them seriously. And then you look at all of you in here. Look how well you’re dressed,” Trump said. “The lesson in life here is, if you want to be taken seriously, act like a serious person.”

Trump’s reaction to the protesters, specifically his comment comparing activists and prisoners, offended students who left the room, according to Negrete-Retamales, who did not speak on behalf of HFIR.

“Regardless of how it is claimed for this event to have an open space for fruitful bipartisan discussion, it is clear that this was not the case, as the speakers spoke directly against us in an offensive manner as we walked out,” Negrete-Retamales wrote.

TPUSA, a conservative advocacy organization founded by Kirk that touts its close relationship with the Trump family, has faced allegations of racism, according to The New Yorker. The organization has garnered support from people who are Islamophobic as well as some white supremacists, according to the Anti-Defamation League.

GUCR responded to GUCD’s statement with a counter statement Feb. 24, defending the event as an important forum for freedom of speech and diversity of thought.

“We don’t want to legitimize those behaviors by attending an event with these speakers, and we don’t think that folks who disagree with the sentiments espoused by Turning Point USA should want to attend the event either,” Williamson said in an interview with The Hoya.

During the event, Eric Trump and Kirk cited the United States’ recent transition to becoming an energy-independent country as one of the largest successes of Donald Trump’s administration.

Georgetown University announced Feb. 6 that it will divest its endowment from fossil fuel investments within the next decade. At the event, Kirk opposed Georgetown’s decision, saying that fossil fuel companies have propelled the United States to become the world’s leading producer of natural gas.

“That’s thanks to allowing, which I know this university is so unbelievably misguided on, fossil fuel companies to frack and use energy that we have at our disposal with this amazing blessing from God so that we don’t have to buy our oil and natural gas from medieval theocratic dictatorships halfway across the world, so thank you President Trump for embracing liquid natural gas,” Kirk said.

While he called out democratic politicians for what he deemed partisan political tactics, Trump called for open dialogue between Democrats and Republicans. He specifically mentioned Patrick Milito (MSB ’23), a student who was dressed in full senator and Democratic presidential candidate Bernie Sanders (I-Vt.) paraphernalia.

“I mean, with the Bernie guys over there, we could sit down over a beer at The Tombs, and I guarantee you when you really flush out an issue, when you actually take away the labels of the politics and all of the nonsense, 80% of things we probably see eye-to-eye on,” Trump said.

Milito hoped to engage in productive conversation by sitting toward the front of the auditorium. Trump and Kirk directed comments about socialism toward him throughout the event, he said. The attention from the speakers was unexpected, according to Milito.

“To me, it was incredible how he offered a 19-year-old college student to get a beer with him — son of a president,” Milito said in an interview with The Hoya. “That was incredible. And how he strongmanned my personal politics a lot, made a lot of insults to me, but then said, quote, ‘Your hair is way too good to be a communist.’ My life is very surreal.”

Looking toward the next election, Trump said the economy will be the most important issue for voters. Donald Trump is primarily focused on economic policy over identity politics, according to Eric Trump.