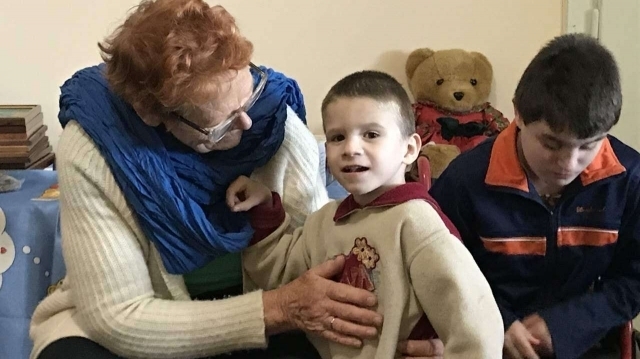 Disability Rights International (DRI), an organization dedicated to ensuring that people with disabilities can fully participate in society, discussed the current plight Ukrainian children with disabilities are facing in the ongoing war with Russia at a Georgetown University event.

The Jan. 12 event was hosted by Georgetown’s Institute for the Study of International Migration, a center in the Walsh School of Foreign Service (SFS) that conducts research on refugee law and immigration. There, DRI Founder and Executive Director Eric Rosenthal (LAW ’92, H ’16) was joined by Quill Kukla, director of the disability studies program, who delivered the closing remarks at the event.

However, many individuals with disabilities had to risk staying behind in Ukraine, according to Rosenthal.

“The people who can’t move, the people for whom accessibility issues prevent them from moving, the kids with the greatest needs were the ones left behind,” Rosenthal said at the event.

Rosenthal said many families who could not afford to bring their child with disabilities when they fled left their children in institutions in western Ukraine.

“They dumped the kids from eastern Ukraine into the facilities in western Ukraine,” Rosenthal said. “These were already bad places with segregation and neglect, and then you double the number of kids in these facilities, and you have a terrible, terrible situation.”

At the event, Rosenthal played a video showcasing the conditions of the Vilshany Orphanage, a facility housing over 200 children with physical and intellectual disabilities. In it, several children were lying in beds without medical care, and one child with cerebral palsy was bound to a chair and calling for his family members, who abandoned him while fleeing to Germany.

Rosenthal met the director of the orphanage years ago, telling the audience that kids should not be placed in those kinds of institutions.

According to Rosenthal, the war may even be encouraging people to donate to facilities that segregate individuals with disabilities.

“When Americans and international groups want to go to Ukraine, they’re going to be dealing with people like this director, who are saying ‘isn’t it terrible that it’s so hard to get money to modernize my orphanage?’” Rosenthal said. “That’s the risk. The war is going to be an occasion for more money being put into already bad segregated facilities.”

One Ukrainian institution receiving aid from an international disability and humanitarian group for physical therapy and massage is still treating children poorly and inhumanely, according to Rosenthal.

“In the same building, children were lying on the floor, rocking back and forth,” Rosenthal said. “Kids were in the grass outside, eating grass and dirt.”

Rosenthal said that during wartime, people have historically been more concerned with the abuse of political dissidents in psychiatric hospitals rather than people with disabilities who are housed in the same institutions.

“Given the history of the political abuse of psychiatry in the former Soviet Union, everyone was concerned when political dissidents were put in psychiatric hospitals, but no one was really concerned when people with disabilities were put in psychiatric hospitals, or people who actually needed some form of support were segregated from society,” Rosenthal said.

Moving forward, DRI will be meeting with the United States Agency for International Development in late January to discuss the possibility of providing government aid for disabled children in Ukraine, according to Rosenthal.