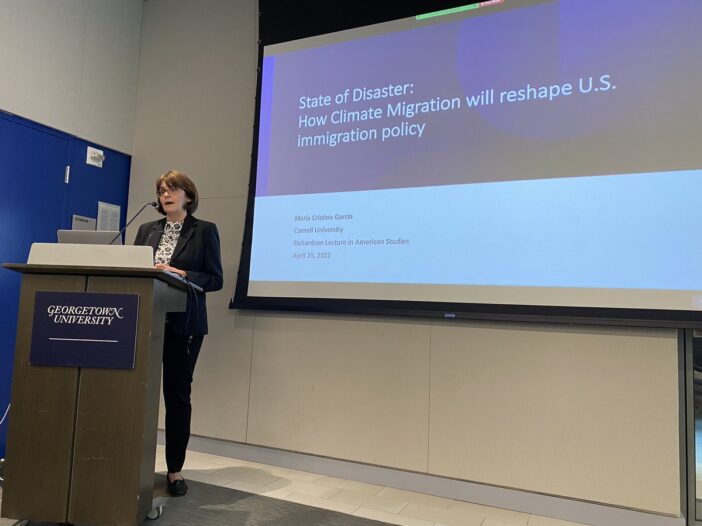 Climate change is accelerating the refugee crisis and posing global, demographic and political disruptions, a panelist said at an April 25 event.

Examining historical instances in which climate change has disrupted communities and led to climate-driven migration is important when considering how the global community must react to future refugee waves, García said.

“The study of history offers us many examples of how environmental disasters have disrupted lives and livelihoods and how they have had political and demographic consequences. It’s part of the human story,” García said at the event. “We are now living in an era of accelerated climate change. At no other time in human history have we had eight billion people living on the planet all contributing in some way to the behaviors that are accelerating changes that in the deep past occurred over thousands of years rather than decades.”

García spoke on various climate-driven natural disasters, including Hurricane Katrina, which displaced over one million people in the Gulf Coast in 2005, and Hurricane Mitch, which caused the deaths of 15,000 people in Central America and left one million Hondurans without homes after it struck the coast in 1998.

Currently, the impacts of climate change, such as rising temperatures and rising sea levels, have caused 20 million people to leave their homes every year. By 2050, the World Bank estimates there will be 143 million more climate migrants from Latin America, sub-Saharan Africa and Southeast Asia alone.

“Hurricane Mitch was both a natural disaster and a policy-driven disaster,” García said. “The poor endured the most significant consequences. As one Honduran scholar noted, ‘The rains fell on all of Honduras, but not everyone got wet.’”

U.S. immigration policy separates individuals coming to the country into three groups: those looking for economic opportunity, those wishing to reunite with family members already in the U.S. and those seeking political asylum, according to García.

By grouping migrants into specific boxes, the U.S. ignores the complex nature of migration, García said.

“These distinct tracks for admission fail to recognize that more often than not, migration is multicausal, produced by a wide and complex range of intersecting drivers that often make it impossible to pinpoint a sole cause for migration,” García said.

It is critical to listen to the voices of immigrants, which can include climate-driven refugees, to better understand their experiences, García said.

The U.S. currently offers Temporary Protected Status (TPS) to individuals who are in the U.S. when their home country receives TPS designation due to an ongoing armed conflict, environmental disaster or extraordinary and temporary conditions.

According to García, while TPS designations are helpful to some extent, the U.S. must focus on the root cause of immigration rather than put a band-aid solution over the larger problem.

“Nations must address the reasons why people migrate in the first place, and that requires difficult conversations about the economic policies that have accelerated climate change, indebted nations, driven more and more people into poverty and made it impossible for people to exercise the right to stay home,” García said. “It’s only when we address these issues that we can begin to help populations adapt to the challenges of today and tomorrow.”

The only way to prevent the climate-driven refugee crisis from worsening and displacing more people from their homes is to take significant steps toward combating climate change immediately, García said.

“So much depends on how we respond to climate change moving forward. Climate change is a fast-moving train,” García said. “No matter how dramatic the steps you take at this moment are, it’s going to take a while to stop that train and perhaps reverse some of the effects that we are seeing today.”