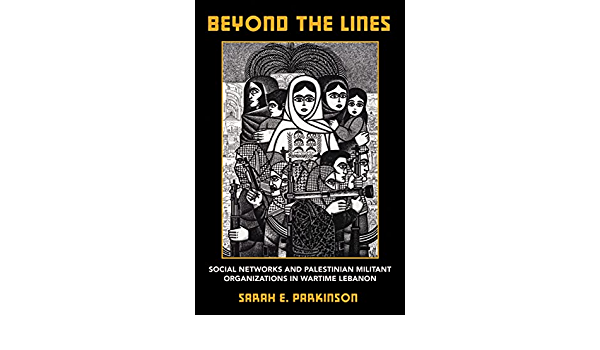 A Johns Hopkins professor presented her new book on the logistical and communicational behavior of insurgent forces during the Lebanon Civil War at a Walsh School of Foreign Service (SFS) event.

Georgetown’s Center for Contemporary Arab Studies (CCAS), the only academic center in the United States exclusively dedicated to studying the Arab world, hosted the Jan. 17 discussion with professor Sarah Parkinson. During the talk, Parkinson explored the inspiration behind her book, “Beyond the Lines: Social Networks and Palestinian Militant Organizations in Wartime Lebanon,” and described how guerilla militant groups combated the operational and resource disadvantages of asymmetrical warfare.

Parkinson said the book aims to capture the human element of warfare that is often ignored in traditional military analysis.

“In Beyond the Lines, I’m interested in deemphasizing battlefield scorecards, which emphasize the actions of fighters, in favor of analyzing how both combatant and non-combatant labor shape organizational and political trajectories,” Parkinson said at the event. “So the argument here is that understanding people’s lived experiences of conflict is not simply a humanitarian necessity, it’s a political imperative.”

Parkinson began by describing the stories of several young women in the Palestine Liberation Organization (PLO), highlighting their multifaceted duties.

Alongside their expertise in firearms and combat, these PLO soldiers serve as battlefield medics, ambulance drivers, nurses, logisticians and social workers, according to Parkinson.

“Every armed conflict involves backstage labor, logistical intelligence, medicine, finance and human resources that may not involve using a weapon,” Parkinson said at the event. “Indeed, most experienced militants with whom I’ve spoken do not consider the physical labor of killing the most important aspect of armed conflict.”

Parkinson then discussed the ways military networks structure themselves, and said insurgent groups are often organized as a complex web that involves intimate personal connections and social roles as opposed to a regimented, linear ladder.

“If you think about what a military organization looks like, it’s a hierarchy, top to bottom,” Parkinson said. “However, think about how all of the people in that are in multiple networks at the same time. Someone who is a soldier is also a spouse, is also a member of a sports team.”

Parkinson also explored how militias utilize stereotypes at the intersection of gender and age, such as underestimating the capabilities of older women, to their benefit for communication purposes.

“One of the people I knew who had been in a guerrilla organization talked about this little old lady who would stand next to a collaborator and drop a bag of groceries. That’s how we knew we had to target that person,” Parkinson said.

While discussing the common presentation of non-combat roles like document forgery, which are often done by women, as merely indirect support, Parkinson said these roles are highly specialized and require far more skill than ground soldiers.

“I can give an 18-year-old guy a gun and train him to shoot at the broadside of a barn,” Parkinson said.“And then I can think about what it takes to forge a passport, which is what a lot of these support roles are. Are you confident smuggling $10,000 in cash tomorrow? These are high-skilled roles requiring incredible people skills that most 16 to 18-year-olds do not have.”

Looking forward, Parkinson said she expects U.S. activism strategy to parallel the tactics rebel forces in the Middle East have used to achieve their political goals.

“Regarding American reproductive rights issues that have returned, you will get old people mobilizing because they have old networks from when they were protesting in the 70s,” Parkinson said. “They’re back out there in a very particular way because of how they understand a particular mode of repression.”