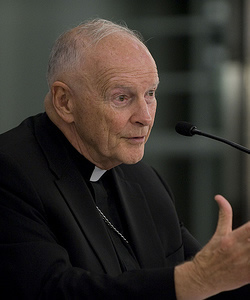 CW: This article discusses clerical sexual assault. Please refer to the end of the article for on- and off-campus resources.

McCarrick was charged with three counts of indecent assault and battery on a person over 14 in the Dedham, Mass. District Court, according to the Boston Globe. The charge refers to an alleged sexual assault of a teenage boy in 1974. McCarrick is set to appear in court for arraignment Sept. 3. Pope Francis stripped McCarrick of his ecclessiastical status Feb. 16, 2019; just three days later, the university revoked McCarrick’s honorary degree.

Several survivors have attempted to file civil lawsuits against McCarrick for alleged assault between the 1970s and 1990s, according to The Boston Globe, but they were blocked by the statute of limitations, a law that dictates the maximum amount of time that can pass after an event before legal parties can no longer press charges. The survivor who was allegedly assaulted in 1974 successfully pressed charges because McCarrick was not a resident of Massachusetts and left the state after the assault allegedly occurred, thereby stopping the clock on the statute of limitations.

McCarrick is now the first cardinal in the United States to be criminally charged with a sexual offense against a minor.

The Vatican initially announced a separate, internal investigation into sexual assault allegations against McCarrick in 2018. After the church found McCarrick guilty of sexually abusing minors and adults in seminaries over several decades and Pope Francis removed McCarrick from the clergy, he became the highest-ranking clerical official in the United States to be removed from office because of sexual assault allegations.

Since 2018, the university has also revoked an honorary degree from former Provost J. Donald Freeze, S.J., in June 2021. Administrators revoked Freeze’s degree after allegations arose that he forced an undergraduate student to engage in nonconsensual kissing while working at Georgetown from 1971 to 1991.

The university continues to oppose and combat the clerical sexual abuse crisis, according to a university spokesperson.

“We are committed to continuing our response to the clerical sex abuse crisis, hosting public convenings and conversations that build awareness and supporting research into the effects of clerical sexual abuse on survivors and how to improve screening and assessments of candidates for the seminary,” a university spokesperson wrote in an email to The Hoya.