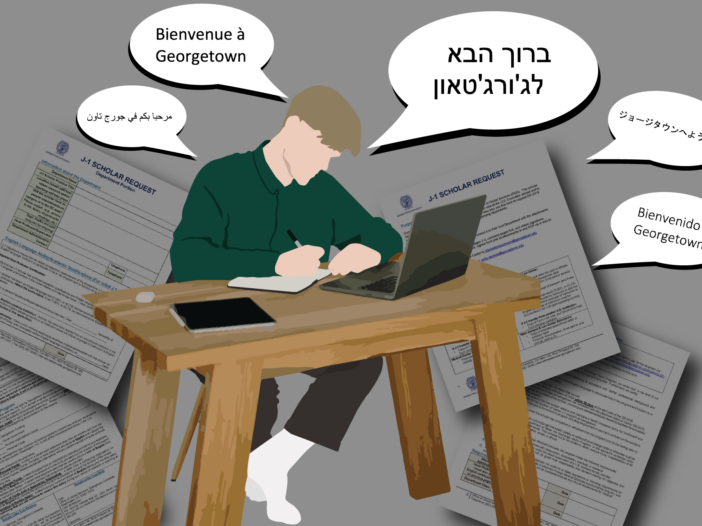 When Georgetown University announced in December 2021 that the first three weeks of spring semester classes would be online, exchange student Odelia Kamhi became concerned about a tougher transition to Georgetown campus life.

Kamhi had arranged to come study at Georgetown from her home university of King’s College London for the spring 2022 semester for months, planning to arrive in early January. With Georgetown’s sudden change to virtual instruction, however, she decided to delay her arrival in the United States several weeks.

When Kamhi finally arrived on campus Feb. 17, classes were still online, and living in an apartment off campus made it very difficult to meet other students.

However, once classes began in person Jan. 31, Kamhi soon fell in love with Georgetown and the courses she was taking.

“Now, I love classes on campus, being in a classroom of people who are like-minded and are enjoying the subjects they are learning and just being bold,” Kamhi said.

Kamhi is one of approximately 30 undergraduate exchange students on campus, from 11 universities in six different countries, according to a university spokesperson. Exchange students come from almost 30 different universities that have partnerships with Georgetown, and stay for either a full academic year or semester.

Kamhi’s experience is shared by many; exchange students faced a difficult start to the semester because of online classes, challenges with acquiring visas and a lack of orientation and designated community-building events.

Two months later, however, students have reported an increased sense of community through in-person classes and friendships facilitated by the Global Living Community (GLC), a Living Learning Community focused on building relationships between American, international and exchange students. To the disappointment of some residents, however, the university will put the GLC on pause at the end of the year.

When this semester’s exchange students arrived at Georgetown in January, they were immediately thrown into the bustle of campus life, finding their way around Georgetown classes, club culture and the greater Washington, D.C. area.

Classes were fully online for the first several weeks of the spring 2022 semester because of rising national cases of the omicron COVID-19 variant. The university discouraged in-person social events, and asked students, organizations and faculty to move gatherings online.

For students arriving on campus for their exchange semester, the lack of in-person events and classes made it very difficult for them to meet one another, according to Sofia Rakitin, an exchange student from Mexico Universidad Iberoamericana.

“Having Zoom classes is just terrible, especially if you’re new from a new country, a completely different culture. Obviously, you come with an open mindset,” Rakitin said in an interview with The Hoya. “But it’s so difficult to project that through a computer screen, because there’s not a lot of space for interaction.”

The university did not greet exchange students with much support, according to Rakitin.

“The second I arrived here I felt there wasn’t any kind of support system for exchange students especially because you don’t know where, for example, you need to go pick up your key,” Rakitin said. “It’s not really clear, like the instructions are so vague.”

Even in August, when COVID-19 case numbers were lower than they were in January, there were still no organized in-person events for exchange students, according to Victor Dupasquier, an exchange student from SciencesPo in Paris, who is spending the 2021-22 academic year at Georgetown.

“When we arrived we had no welcoming event, no tour of the campus, we were left alone, with only a 30 minute zoom conversation,” Dupasquier wrote in a message to The Hoya.

In the years before the COVID-19 pandemic, both international students and exchange students attended several orientation sessions as a part of the International New Student Orientation (I-NSO) before starting classes. The Office of Global Education also arranges a separate orientation session for exchange students to provide an overview of academics, campus life, health and safety, and traveling around D.C., according to a university spokesperson.

Because of COVID-19 restrictions, however, I-NSO and all events for exchange students were held virtually in fall 2021 and the first weeks of the spring semester, according to a university spokesperson.

“In-person programming for fall 2021 was suspended because of many pandemic-related considerations that limited inclusive live event opportunities,” the university spokesperson wrote in an email to The Hoya. “In spring 2022, the University started the semester virtually and in-person events were suspended until after February 11.”

The Office of Global Services (OGS) still provided some virtual programming events for exchange students, according to the university spokesperson.

The university virtually held the International Ambassador Program, which matches international and exchange students with fellow Georgetown students to support their arrival and adjustment to campus, starting in June for the fall 2021 semester and in November for the spring 2022 semester and running through the start of classes, according to the university spokesperson.

For students not living on campus, the lack of programming or organized events for exchange students was even more profound, according to Kamhi.

“I think because I’m living off campus and living in an apartment with another student, and because I didn’t have a housing plan or a meal plan, I just felt a bit further away,” Kamhi said. “What I would have loved actually would have been some international student events or tours for the campus.”

While the beginning of the semester saw challenges for many exchange students, subsequent weeks have been a significant improvement for some students, including Rakitin.

“Definitely after, I would say, a week, a week and a half, I felt like more at home, I knew where stuff was on campus and around town, and also I got to know more people so I think that was a really big factor,” Rakitin said.

An Application Process Rife with Difficulties

Even before arriving on campus, the exchange process was difficult to coordinate due to delays in the release of application materials and miscommunication from the university regarding requirements, exchange students told The Hoya.

However, the university failed to alert Gorka Eizaguirre Fernandez, a student from ICADE Business School in Spain, about the requirement to submit a second application to Georgetown until after the deadline of Oct. 1, according to an email obtained by The Hoya from his advisor at ICADE.

Maria Castro-Rial Vidal, an exchange student from the Universidad de Comillas in Madrid, Spain, felt very rushed trying to apply for a visa because the university sent the DS-2019 slowly, Castro-Rial Vidal told The Hoya.

“In order to complete all the visa requirements, you need to receive some documents from Georgetown and the university has to send you those documents. The process was super slow,” Vidal said. “We had to do everything at the last minute.”

The university and partner institutions work together to help students with the application process, according to the university spokesperson.

“We work with exchange partner institutions to ensure they can give their students a clear understanding of the Georgetown application process,” the spokesperson wrote in an email to The Hoya. “Details about applying to Georgetown are published online and staff in the Office of Global Education (OGE) are available to assist prospective students with the process.”

Exchange students must apply for a J-1 visa, which sponsors work-and-study-based exchange and visitor programs, to enter the United States after being approved for study abroad. After obtaining a DS 2019, students must schedule a J-1 visa interview at a U.S. embassy and wait for an embassy official to approve the application, a process that can take as little as a few days or up to several months depending on the embassy’s application backlog.

Dupasquier had to schedule an emergency meeting at the French embassy in order to get his visa on time, he told The Hoya.

“Even our home university advisor said she thought we wouldn’t go,” Dupasquier wrote.

For Kai Nagai (COL ’23), a student from Japan, the delays and uncertainty caused significant concern, he said.

“I understand that the Covid-19 restriction overwhelmed OGS, the office needed to take into account that the international students, most of whom were living abroad for the first time, were facing an incredibly uncertain future,” Nagai wrote in a message to The Hoya.

The End of the Global Living Community

Now two months into the semester, exchange students are beginning to adjust to the Georgetown community, meet other students and become involved in on-campus activities.

One important aspect to this adjustment has been the Global Living Community (GLC), a Living Learning Community (LLC) composed of international, exchange and American students focused on international understanding, cultural diversity and global issues.

“I’m just a month in and I definitely feel like I’ve settled quite quickly, and the fact that we’re on an exchange floor and I’m with other exchanges has a lot to do with that,” Prematillaka said in an interview with The Hoya. “If I was just with American students I would feel very lost.”

Despite the importance of the GLC to many exchange and American students, Georgetown Residential Living announced Feb. 4 that the Global Living Community will no longer be accepting applications and will be shutting its doors to new students because of “decreased interest.”

Closing the GLC demonstrates the university’s lack of emphasis on cultural interchange between American students and those from other countries, according to Rebekah Morrison (COL ’23), who currently lives in the GLC.

“I know the GLC has been hugely beneficial to the exchange students in their transition to Georgetown,” Morrison wrote to The Hoya. “I think by canceling GLC, the university is taking a resource away from a vulnerable population.”

Morrison was excited when she was accepted to the GLC because it would give her opportunities to meet students from other cultures. However she was disappointed when the community offered very few events or formal programming, she told The Hoya.

“GLC is supposed to have community service projects, international dinners, and a retreat each semester,” Morrison wrote. “None of that has happened. We haven’t had any programming all year.”

Most GLC programming is organized by residents, according to the university spokesperson.

“Beyond the university-organized fall and spring retreats, programming and events for the Global Living Community (GLC) are organized and run by the residents themselves with support from the GLC advisor and community director,” the spokesperson wrote.

GLC did not host a full fall retreat in 2021 because of COVID-19 restrictions, and in its place held a virtual mini-retreat, according to the spokesperson.

Despite this lack of programming, living in the same community as students from other countries still provided opportunities for intercultural interactions, according to Morrison.

“I have made some incredible connections through GLC, I definitely found some lifelong friends and I learned about a variety of different cultures,” Morrison wrote.

Before the announcement of the community’s closure, Morrison was hoping to continue living there throughout her senior year at Georgetown, she told The Hoya.

The university decided to pause several LLCs, including the GLC, to reassess its programming and goals, according to the university spokesperson.

“The university recognizes the disappointment that this decision has caused,” the spokesperson wrote. “While these disruptions have impacted LLC student life, they also offer a valuable opportunity for Residential Education and students to reflect on the goals, mission, programming and format of LLCs in the context of our current world and reflecting on modern-day issues.”

While GLC is a beneficial way for American students to meet students from other countries, it is also important for exchange students to make connections when first arriving at Georgetown, according to Morrison.

“GLC is an easy way for exchange students to meet full-time Georgetown students and connect,” Morrison said. “Without that, I think the transition to Georgetown will be much more challenging for next year’s cohort.”