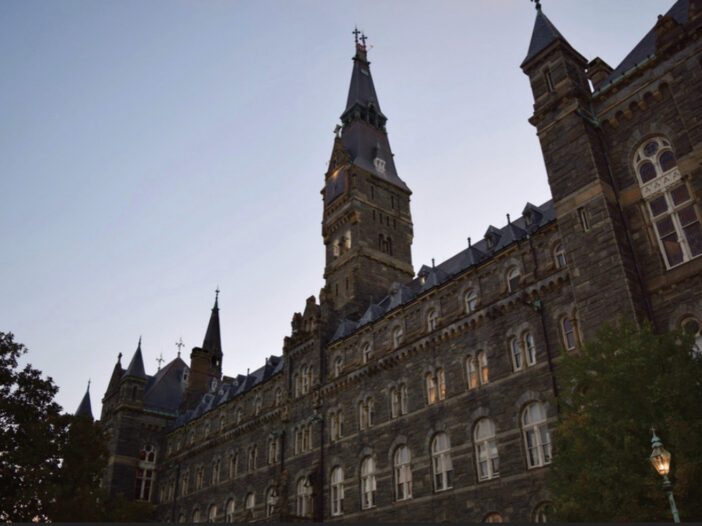 The exhibit, titled “Forgotten Roots: The History of Muslims in America,” featured images of Muslim scientists, musicians, military service members and law enforcement agents. The display, which specifically focused on Black Muslims, was in the Healy Hall foyer from Feb. 22 to 25.

Fardusi Uddin (SFS ’22), the Alumni Relations and Outreach fellow for Muslim Life and vice president of the Muslim Student Association (MSA), said the images at the exhibit illuminated her understanding of the presence of Muslims in the United States.

Doha Maaty (NHS ’23), MSA president, visited the exhibit Feb. 22 and noted that Muslim history often does not receive the attention it should.

“I don’t think I realized how substantial the number of slaves that were Muslim that were being brought to America were and how that really did shape the United States and how we see things today,” Maaty said in an interview with The Hoya. “Unfortunately, it’s not given enough of a spotlight.”

Hendi said he hoped the exhibit helped students understand the extent to which Muslim history intertwines with U.S. history.

“I wanted people to know that American Muslims are not newcomers to America, and that American Muslims have been and continue to be a part of the fabric of the United States of America,” Hendi said. “In being honest with that tradition, that culture and that segment of our country and our population, we will be honest to who we are as a country.”

Planning for the exhibit began after winter break, and Muslim Life chose to place the exhibit in Healy to increase accessibility, according to Uddin.

“We wanted the artifacts, the showcases, the exhibit to be somewhere that is accessible not just to Muslims, but to everyone in the community,” Uddin said in an interview with The Hoya. “We were mindful as to how to showcase this Muslim African history to non-Muslims as well by putting the exhibit in the Healy foyer.”

This was the first time that the exhibit was showcased on campus since 2017, and although it may return in the future, Muslim Life does not plan on making the display annual, Uddin said.

“It might be something that might come up again after another three or four years so a new batch of students are able to see the exhibit,” Uddin said. “We want to be able to bring in new speakers, new features and new things to the current class — we’re very cognizant about making sure the events we have are quality events, but events that are new and interesting.”

Hendi said that the goal of the exhibit was to bring people of all backgrounds together.

“My hope was that people would learn how to celebrate diversity here on campus and across the country,” Hendi said. “I wanted to also educate Muslims about their roots in America to hold themselves high and be proud of who they are.”