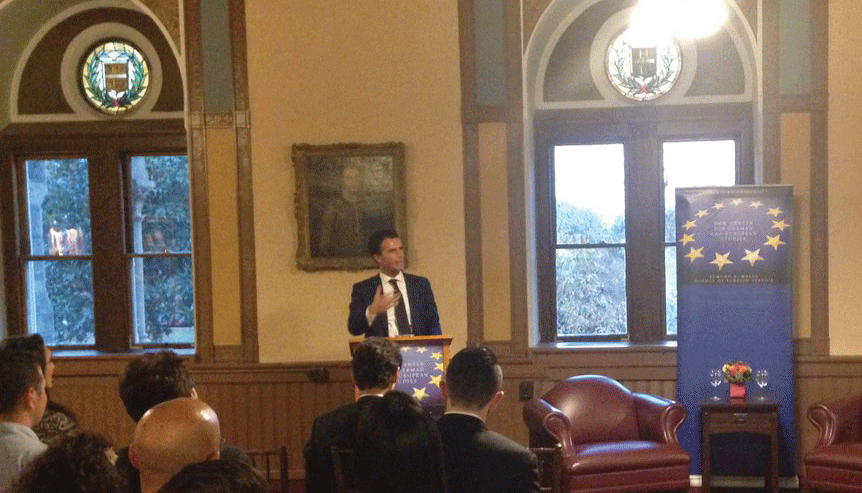 Europe and the United States must work together to establish stronger migration and security policies, according to Sandro Gozi, in the office of the Italian prime minister, in a talk in the Bioethics Research Library on Wednesday.

“We have to sharpen our policies. If you want to win the challenge of migration, the right answer is to develop a new, common policy,” Gozi said. “We want and need to take back control. The wrong answer would be to go back to national policies.”

Before assuming his current position in the Italian government, Gozi served as the leader of the Democratic Party on the European Committee of Affairs and as a member of Italy’s delegation to the Parliamentary Assembly of the Council of Europe from 2013-15.

Europe must also build its security resources, according to Gozi. The French Parliament found multiple intelligence failures led to the 2015 terror attacks on French satirical newspaper Charlie Hebdo, which left 12 dead and 11 injured, and the November 2015 terror attacks on the Bataclan concert venue and other targets in Paris.

“As Europeans, we need to do more in building up intelligence because it comes from inside and outside,” Gozi said. “We need to devise new security measures and need to make stronger emphasis on defense and in our military.”

“We are confronted with new challenges that are more common than we think. This requires a much stronger and deeper common analysis,” Gozi said. “We have lost control on one of the biggest challenges — migration and refugees.”

According to Gozi, Europe faces large challenges in generating more ideas and action on intelligence, given the internal economical turmoil and high levels of xenophobia in the region.

“Instead of increasing and integrating analysis under threats and crisis, Europe does not find solutions other than to arrest each other,” Gozi said. “There are big gaps we need to fill in and I am not naive in that I know that there is nothing but a strong uphill battle ahead for preventative measures.”

Gozi added that new policies should also look to address Europe’s current lack of economic growth, which has impacted many other issues such as weak employment.

“We must devise a new economical and social policy to strengthen policy and government through physical capacity and new governance,” Gozi said. “This will help control the democracy of the national policies.”

Gozi highlighted the coming year as the time to act on the issues facing Europe and enact new policies.

“We want to use a symbolic moment and focus on next year, March 2017, where we will propose a new vision with new political integration processes. We must rely on and use this occasion for a new process of integration and must take a new commitment,” Gozi said.

Gozi said by focusing on upcoming years, positive change can be affected.

“We must be very brave and focus not only on the past 60 years of hard work and accomplishments, but on the future 60 years,” Gozi said.

“I think Mr. Gozi gave an insightful discussion, especially on Italy and the European Union. I’ve actually heard him speak before in Italy and I think Mr. Gozi does a great job giving a positive vision of Italy’s future,” Candia said.