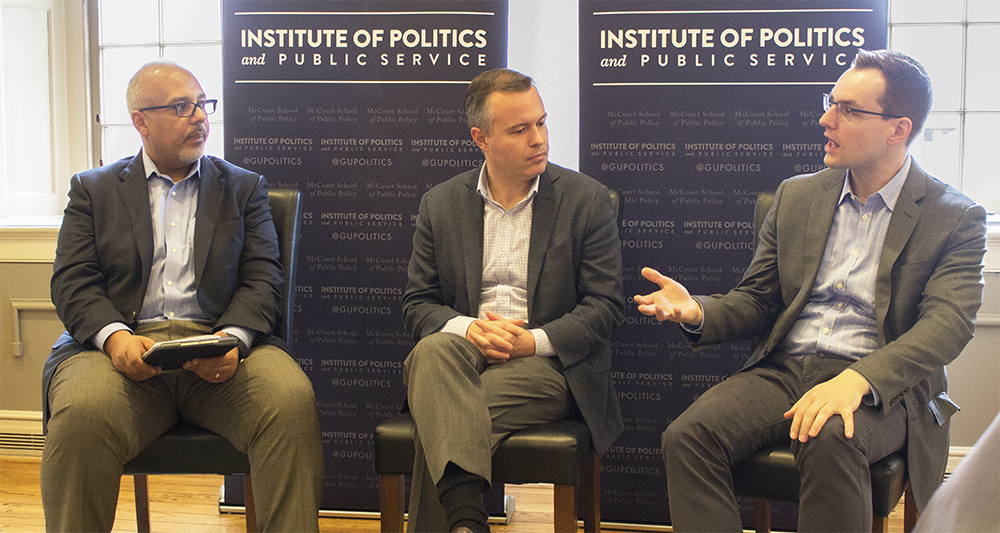 To counter the threat of digital encroachment on politics, government officials must be forward-thinking to anticipate challenges, said Matt Rhoades, the founder of Definers Public Affairs and the former campaign manager for Governor Mitt Romney’s 2012 presidential campaign, at an event Friday afternoon.

The conversation served as a platform for Rhoades and Mook to discuss their recently published “Cybersecurity Campaign Playbook,” a handbook that provides simple and achievable steps to keep a campaign secure, according to the introduction published on the Harvard Belfer Center’s website.

The discussion also focused on digital democracy as a bipartisan issue, a theme demonstrated by the inclusion of political operatives from different parties.

The event opened with a discussion of Russia’s role in the 2016 presidential campaign. Mook emphasized that, to prevent future interference, government officials need to anticipate areas that are susceptible to cyberattack.

“Russians were acting and seeking to either influence or disrupt the election,” Mook said. “The most important thing [is] to be forward-looking — what are we doing to prevent this from happening?”

Rhoades echoed Mook’s sentiment regarding the need to be forward-thinking, adding that he believes it is important to look beyond Russian interference when examining digital encroachment.

“It was all about being forward-looking; however, we need to focus on not just the Russians,” Rhoades said. “In the fall of 2011, I found out that one day our system had been breached by an outside entity in China. There are other states out there, and we are lucky to work at Harvard and the Belfer Center where people are really focused on today’s biggest cybersecurity threats, like Iran.”

The two experts also discussed their motives for publishing the “Cybersecurity Campaign Playbook,” which was published last fall. Rhoades said he was motivated by a need to disseminate practical, easy-to-understand information to communicate how to keep political campaigns free from interference.

“We wanted to do practical things, so first we put together a playbook for people who are working on campaigns all over the country,” Rhoades said. “The first thing about the playbook is that it needed to be practical, digestible and with a lot of free options. That was the theory and concept of why we put it together.”

“You wouldn’t believe how many leaders are out there who want their own personal accounts,” Rhoades said.

“Sometimes our focus was too much on elections and administrators and not enough on legislators and Congress,” Mook said. “The system is set up that it’s not conducive to secure it, but that’s up to the legislators to put pressure on the legislators to get more security measures, to get Congress to put money and resources into the system.”