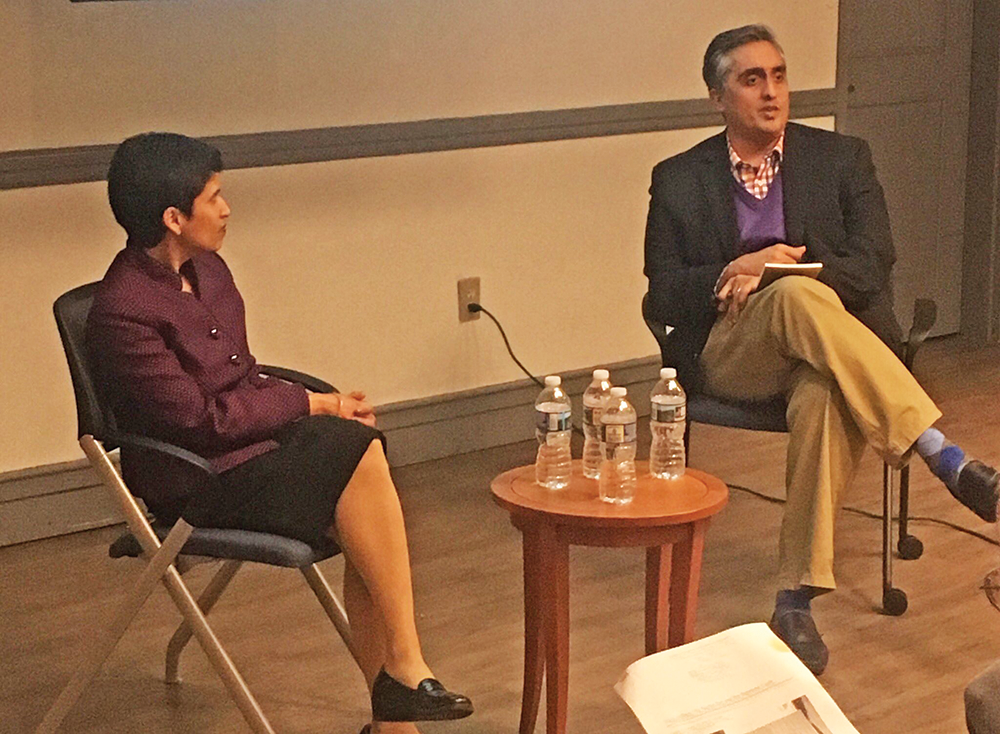 Titled “Unpacking the Muslim Bans: A Conversation on Islamophobia in the Courts and the Administration,” the event featured an address in which Wadhia described the details and legality of the executive orders that have attempted to prevent citizens from Muslim majority countries from entering the United States.

Since the order went into effect, an additional executive order and presidential proclamation were signed adjusting the restrictions of the ban in March and September respectively. In December 2017, the Supreme Court granted the Trump administration’s request to temporarily reinstate the latest executive order to its full effect as the case against its legality is litigated in court.

The event was organized by The Bridge Initiative, an ongoing research project on Islamophobia based in the university’s Prince Alwaleed bin Talal Center for Muslim-Christian Understanding. It was cosponsored by the Center for Contemporary Arab Studies and Georgetown University Law Center’s Office of Equity, Community and Inclusion.

A conversation between Wadhia — founder and director of the Center for Immigrants’ Rights Clinic, which provides policy development, legal support and community outreach and education to organizations and individuals seeking assistance — and Bridge Initiative Senior Research Fellow Arsalan Iftikhar followed the address.

Wadhia said one of the main legal arguments against the immigration restrictions is the Establishment Clause of the First Amendment, which protects freedom of religion in the United States.

Trump’s rhetoric against the Muslim community can be used to demonstrate his bias in potential court briefings, Wadhia said.

“His rhetoric could be important. It will be important in the briefings of the court, especially around the Establishment Clause claims, because part of the argument is that his statements on the campaign trail and after the inauguration showed that he had an animus in creating the executive orders,” Wadhia said.

The decision by the Supreme Court to reinstate the ban resulted in confusion over the extent of its application, Wadhia said.

Wadhia said that families, especially those of international students, will face a significant impact from the reinstatement of the ban.

“The human impact on the ground is profound, because it means that, between now and at least June, families are suffering. Iranians who are studying at Penn State cannot have their parents visit,” said Wadhia. “There are practical impacts including family reunification that are front and center with the full force of the ban in effect.”

The recent immigration legislation has also introduced a new process for individuals limited by the immigration ban to apply for a waiver program on a case-by-case basis through their consulate. The program comes with limitations in its practice, according to Wadhia.

“One thing I’ve done along with some other organizations is to document cases where people were denied visas and were never considered for a waiver or were denied a visa and brought paperwork in support of their waivers and the consulate ignored it,” Wadhia said. “We’ve seen more than a handful of cases where this has occurred.”

Iftikhar said there is a need for individuals not directly affected by the anti-Muslim rhetoric and reinstatement of the ban to act as allies.

The courts have the responsibility of holding Trump accountable for his discriminatory legislation, Wadhia said.

“We have an administration that is placing pressure and greater responsibilities on the court to respond and remind the American public that we have three branches of government, and that we have separation of powers, and no President is above the law,” Wadhia said.

Regardless of the court decision later this year, Wadhia finds the pushback against the ban to be a victory itself.

“However the court rules, we know that there has been some type of victory and success in the resistance,”Wadhia said. “A powerful message that these bans are really inconsistent with American identity.”