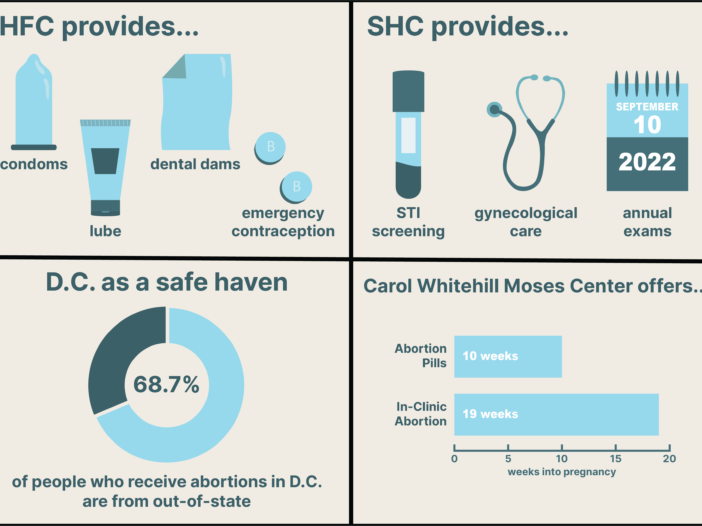 Following the Supreme Court’s decision in Dobbs v. Jackson Women’s Health Organization overturning Roe v. Wade, people across the nation have mourned the loss of the constitutional right to an abortion and have fought diligently to secure state-level abortion rights.

While abortion is currently legal in Washington, D.C., the District’s laws are subject to congressional intervention; that is, the United States Congress reviews all legislation before it becomes D.C. law and can modify or overturn all legislation. Therefore, if the Republican Party takes control of Congress after this year’s midterm elections, abortion access in the District may be in jeopardy.

With the future of abortion access at risk across the nation, The Hoya has compiled information about how Georgetown University community members can access abortion care and contraceptives both on- and off-campus, as well as the District’s current and potential abortion laws.

As the oldest Catholic and Jesuit institution in the United States, Georgetown University aligns itself with the values and beliefs of the Catholic Church, including those that condemn abortion and contraceptives as “immoral” in all cases.

The university’s Catholic identity and adherence to these principles have historically led to administrative struggles, as the institution attempts to balance its devotion to faith and tradition with its commitment to protecting free speech and providing an inclusive environment for students of all backgrounds.

Although abortion access is legal in the District, the Georgetown University Medical Center does not perform abortions because of religious restrictions.

As a Catholic hospital, MedStar Georgetown is not permitted to perform abortions in accordance with the “Ethical and Religious Directives for Catholic Health Care Services.” The Georgetown University School of Medicine also does not offer abortion training in its curriculum.

On the main Georgetown campus, H*yas for Choice (HFC), a pro-abortion rights student group, continues to work on advancing the abortion conversation. While abortions are prohibited at MedStar Georgetown, many HFC members work as volunteer clinic escorts for Planned Parenthood and similar abortion-providing organizations in the District.

In recent weeks, HFC launched a #nochoicenodonations campaign in collaboration with the Georgetown University Law Center chapter of If/When/How, a national nonprofit network of lawyers and law students focused on providing legal support for reproductive justice issues including abortion.

The campaign asks community members to join a “no donation” pledge, which seeks to withhold certain donations to the university endowment to pressure the university into changing its policies on reproductive rights following the overturning of Roe v. Wade.

HFC plans to continue its pledge until Georgetown supports its fight for reproductive justice and family autonomy at the university. It hopes to see Georgetown provide students access to contraceptives on campus, funding for pro-choice groups and events, access to online classes for pregnant students or new parents and the end of administrative support for anti-choice events.

Following the overturning of Roe v. Wade, University President John J. DeGioia (CAS ’79, GRD ’95) emphasized the university’s commitment to open and respectful discourse on the decision in a statement to the Georgetown community June 27.

“This case involves complex questions of moral judgment in the context of decisions that are very personal, intimate, and often very painful,” DeGioia wrote in the statement. “In the days ahead, we will draw on our resources as an academic community as units across the university host events and convenings to explore the issues raised by the Court’s decision.”

Facilities in the District that do offer abortion include the Carol Whitehill Moses Center, which houses Planned Parenthood of Metropolitan Washington, D.C. The center offers abortion pills for people less than 10 weeks into their pregnancy and in-clinic abortions for people up to 19 weeks and six days into their pregnancy. Escorts, interpreters and support staff are also available to assist patients with additional needs.

HFC is the sole contraception provider on campus and tables weekly, Monday through Friday, in Red Square to give out safe-sex supplies including condoms, lube, dental dams and emergency contraception for free.

The university’s Student Health Center (SHC) is permitted to prescribe hormonal contraceptives, but there must be an underlying medical need for the prescription, such as acne, cramps, polycystic ovary syndrome and heavy or irregular periods.

Georgetown offers a variety of reproductive services through SHC, which include STI screenings, gynecological care and annual exams. SHC also offers free, at-home pregnancy testing, as well as counseling and support for matters relating to pregnancy and sexual health.

Abortion Rights in the District

Abortion is currently legal during every stage of pregnancy in the District, including third trimester abortions. The District serves as a safe haven for individuals seeking abortions, as out-of-state residents constituted 68.7% of reported abortions in Washington, D.C., in 2019.

Abortion providers and healthcare professionals in the District are also protected from discrimination through a 2020 law passed by the Council of the District of Columbia.

Although abortion is currently legal in the District, Congress has placed limitations on abortion, despite strong support for reproductive rights laws among District residents.

Nadia Brown, a Georgetown government professor and director of the women’s and gender studies program, said abortion restrictions in the District tend to disproportionately affect marginalized communities, including transgender and non-binary people.

“This is where the nation experiences high levels of poverty as well as high levels of affluence and luxury,” Brown said in an interview with The Hoya. “Those women that can afford private medical services continue to do so, and abortions will be open to them in ways that will not be for a majority of people who are living below or at the poverty line.”

Brown also said some local legislation hurts women in poverty; for example, the 1989 Dornan Amendment prevents Medicaid funds from being used to fund abortions in D.C.

“People that are accessing public services would probably be the ones that would also need public assistance in terminating a pregnancy whether it is unwanted, at the risk of the mother’s health or a byproduct of rape or incest,” Brown said.
Low-income individuals and people of color have historically struggled to access abortion services because of financial difficulties, lack of quality sexual health education resources, inability to provide proper identification and difficulty accessing abortion facilities.