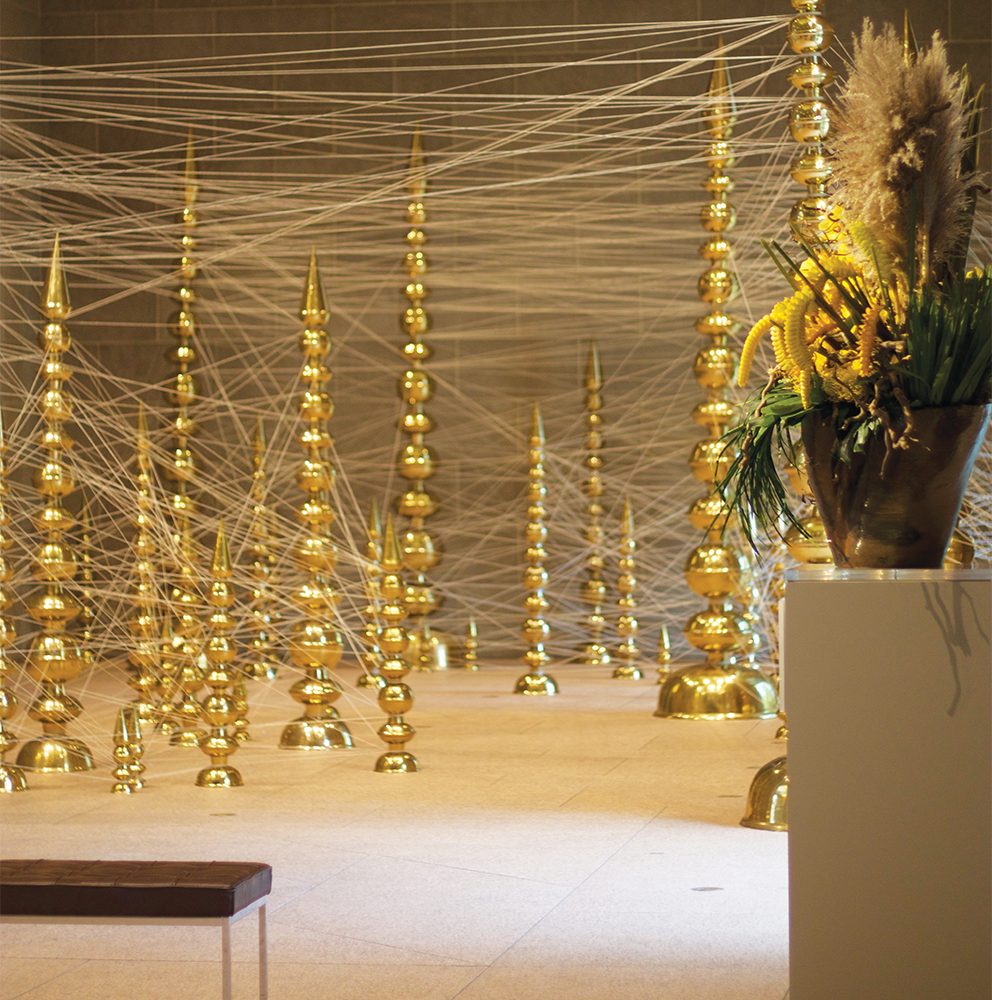 The Sackler Gallery presents artwork from contemporary Asian artists through several exhibitions and public programs. Gupta’s installation reflects the gallery’s goal: “to share the rich diversity of Asian art across time and space.”

Gupta’s work is heavily influenced by Indian culture. He is known for using ready-made everyday objects found in India, from bicycle parts to milk pails, and reconfiguring them into new abstract shapes.

“I do try to create an abstract form to the point where even I cannot recognize it, but still can feel something from it,” Gupta said of his artistic style. In “Terminal,” Gupta created an installation that draws inspiration from the horizon of Indian cities.

In an artist talk on Sunday, Carol Huh, an associate curator of contemporary Asian art at the Freer and Sackler Galleries, spoke with Subodh Gupta about “Terminal” and his artistic career.

Gupta began by talking about how he incorporates his personal history into his creative practice.

“I grew up in the eastern part of India and came from the middle-class family. I lived in a place called Konkan that was very close to the railway. So 99 percent of those who lived there worked in the railway,” Gupta said. “Basically, I am the ‘Railway Boy.’ Juggling with family and just growing at any pace, I somehow ended up in the art world without knowing that art colleges even existed.”

Gupta studied at the College of Art in Patna, India. Upon his graduation, he struggled to gain recognition in New Delhi. However, in the following years, he slowly gained success outside of India while working in casting and sculpture. Gupta now has showcases in exhibits across the world, from the National Gallery of Victoria in Melbourne, Australia, to the Museum of Modern Art in Frankfurt, Germany.

Delving more into his practice and work on “Terminal,” Gupta explained the inspiration behind the title of his work. According to Gupta, two things are most important to his country: politics and religion.

Walking into the space of the 15-foot-tall installation, composed of tall spires comprised of golden brass vessels interconnected by white threads, viewers will note that there is no obvious beginning or end to the piece.

Gupta intentionally has the viewer decide how to interpret the terminal.

With “Terminal,” he also transforms the concept of the vessel as a means to express spirituality. He focuses on the symbolic references to mobility and spirituality in the act of worship across cultures and civilizations.

“It is really interesting to see how religions have different symbols but all have the same design through their pinnacles. That is how I decided to portray pinnacles as the base of my installation to convey one uniting religion,” Gupta said.

Gupta also describes his particular reason for using white in the thread between spires.

“Unlike in Hinduism where people wear the color amber, the white color of the cotton does not emphasize any particular religion like Hinduism or Islam. Therefore, I chose the white trait because it is a natural trait that belongs to everyone,” Gupta said.

Even Gupta’s process for conceptualizing and finding materials for “Terminal” carried specific intent.

“Whenever I think of the artwork, I also think of its sustainability of the material and how I will be able to create something that is not available in the market,” he said.

Ultimately, “Terminal” is a powerful installation that reflects the importance of interfaith dialogue. The delicate threads between brass vessels act as an inspiration that will encourage viewers to think critically about coexistence and accept others regardless of their backgrounds.

As the Sackler Gallery celebrates its 30th anniversary, “Terminal” visitors will be reminded of the gallery’s legacy of cultivating beautiful, meaningful works of Asian art. Gupta has produced a stunning, thought-provoking installation, which, as Huh said in a Smithsonian press release, “recontextualizes a familiar shape to encourage reflection on the idea of community, especially in a world increasingly challenged by religious differences.”

The exhibition is on display at the Sackler Gallery until June 24, 2018.