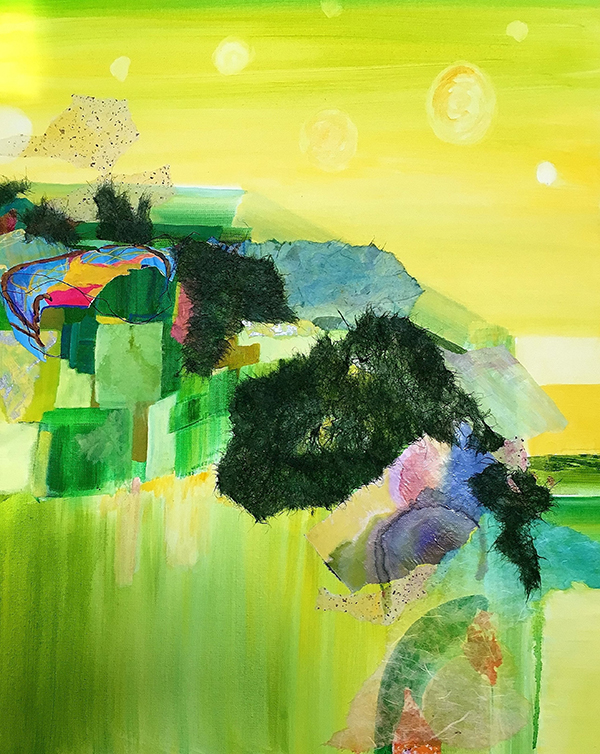 Today, the United States is home to nearly two million Korean-Americans, many of whom have spent part of their youth in Korea. The narratives of Korean-Americans are shaped both by Korean tradition as well as elements of modern Western culture.

The Korean Cultural Center in D.C. has partnered with artistic collective The Drawing Room to explore the stories of Korean-Americans with a new exhibition entitled “Evolving,” which features works by five Korean-American artists who use a variety of creative media to reflect on their early youth in Korea and present life in the United States.

“Heritage can be a powerful source of identity and as it is often the case, how we view our own past evolves with time,” Korean Cultural Center Director Myeongsun Park said. “These artists explore how their youth in Korea has shaped their lives in America.”

Created in 2009, TDR highlights a wide range of creative visions and artistic techniques. The collective has hosted several exhibitions in venues such as the Riverside Gallery in Hackensack, New Jersey and Powerhouse Arena in Brooklyn. “Evolving” is its seventh exhibition.

“Applying as a group of artists is easier because we contain different voices, that is our strength, the diverse experiences and interpretations of life in America we can each present,” artist and TDR member Jayoung Yoon said. “Besides, we are very much like family, we love and support each other deeply.”

Curated by Stephanie Lee — one of the five TDR artists featured — the exhibition is in the Korean Cultural Center’s two main galleries. Artists Jin Cho and Yoon are featured in the west-side gallery, while works by Sueim Koo, Dong Kyu Kim and Lee appear on the east-side gallery.

Yoon is an interdisciplinary artist whose work is based on an unconventional medium: human hair.

“I have shaved my head completely over seven times in the past 10 years.” Yoon said. “The strands of my hair are then hand-knotted and weaved into see-through structures, which represent invisible thoughts and memories.”

Part of the appeal of hair for the Korean-American artist is based on its sacred character in traditional Korean culture. Since hair does not decay for long periods after death, Korean tradition associates it with the preservation of ancestry and spiritual power.

“I was looking for a material that represented physicality and the body, but at the same time represented thought and the invisible, mystic workings of the mind,” Yoon said. “Some of my works have circular shapes that represent interconnectedness and oneness.”

“You will see many different lines and circles in my artwork. Each line represents the path a person can take in their life. They all follow the same current, when you follow the line you can return to the starting point. This is the concept of rebirth,” Cho said.

Cho’s structures connect in circular patterns, inspired by the annual rings from the trees which simulate the idea of an individual’s life.

“I listened to the interview of a woman who lost her son to an act of terror. She said, ‘Why is my son not coming back again? Even the leaves of the trees eventually come back after they fall,’” Cho said. “I wanted to comfort her and say, your son will come back and he will live a different life.”

Borrowing lines from her journal writing, Koo builds on the concept of reminiscence by using mixed media to visually represent key moments charged with emotion and reflection from her life.

“These memories came alive beyond geographic imagery, each of them holds its own story,” Koo said. “I created dream-like images based on the sentences of my personal journal, which I have kept since I was a teenager.”

Koo covers her canvas with rice paper and adds rich blocks of color to create phantom-like, layered works. She titles each piece with words from her journal, imbuing her works with memory and emotion.

“I feel that my memories are filtered and purified by time, appearing as very strong, unique and significant images,” Koo said. “As I do this, I feel as if I have crawled back to the moment I wrote in my journal.”

“I use minhwa in my paintings because I value culture and history. It was surprising for me to see how well tradition and innovation worked together,” Lee said.

“I’m not critiquing the material world in any way. I believe that if you take it as a positive energy, it can become a source of inspiration and aspiration for human desire,” Lee said. “While the objects may change, I believe there is an unchangeable force for humans trying to be better, to improve ourselves.”

After moving to the U.S. in 2007 as a fashion designer, Kim joined TDR in 2009 and delved into the art world. Kim’s patchwork garments seek to reconcile status and happiness as merging concepts. The garments are stitched out receipts Kim has collected throughout her time in the U.S.

“The process of sewing together this receipts can be seen as me moving away from my own memories, while seeking validation of my existence in America,” Kim said. “I also sewed these receipts into the shapes of Korean traditional garments to express my own essence and identity.”

By reflecting on their journeys as Korean Americans, these artists have developed deeply personal, rich works of art well worth viewing. As viewers pass through each exhibit, they will be compelled to contemplate their own identities and stories as well.

“Evolving” is free and open to the public, on view until Sept. 29, 2017 at the Korean Cultural Center, located at 2370 Massachusetts Ave NW, Washington, D.C.