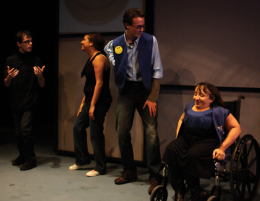 Lily Kaiser (COL ’12) was used to hiding her cerebral palsy. After all, it only affected her right hand, so it was easily concealed, even forgotten at times. For Gallaudet University freshman Kyleigh Herrera, her only form of communication is American Sign Language. She said that much of society disregards her skills — the ‘deaf’ label is a difficult one to ignore.

Thirty-two percent of Americans 18 and older have at least one basic action difficulty or complex activity limitation. Yet physical and mental disabilities are oftentimes swept under the rug.

“It’s hard to bring out a part of yourself in a world where everyone’s so focused on strength,” Kaiser explained.

“Visible Impact,” a project of the Theater and Performance Studies Program, is Kaiser’s story. It is Herrera’s story. It is the story of the 34.5 million Americans who have hearing difficulties. And the 71.4 million who have “disabilities.”

Opening this weekend at the Davis Center for the Performing Arts, “Visible Impact” is a poignant collection of vignettes tackling various forms of disability, such as deafness, cerebral palsy and autism. It mirrors society — how disabilities affect those who have to live with them and those who surround them.

It is the tale of a deaf woman trying to take a citizenship test and being yelled at to sing the national anthem while she can’t hear the demand. It is the story of a dyslexic singer. It is the story of a group of physically impaired greeters at Walmart, discussing how a customer should say hello to them. Ignore them? Express Pity? (“No one’s gonna complain about the disabled woman in the wheel chair.”) Be overly sympathetic — a “thanker”?

“I was much more of a thanker,” cast member Sarah Quehrn (SFS ’12) explains. She doesn’t have a disability but auditioned because she had worked with director Susan Lynskey before. “I didn’t really know how to approach people. I’ve learned that all you need to do is be personable. People will teach you. As the play says in its final line, ‘All you need to do is listen.’”

That listening was crucial in crafting the play itself. Most of the students who walked into auditions at the end of the summer either had a disability or some connection with the community. But for one-third of the cast, issues of disability were unfamiliar — perhaps present in their daily lives only when they mindlessly pushed the button for an automatic door or ambled up a wheelchair-accessible ramp.

Over the course of six weeks, the cast, comprised of 14 Hoyas and three students from Gallaudet, a university in Northeast D.C. that specializes in education for the deaf, shared their stories. Those stories were woven together to create the fabric of “Visible Impact.”

“Developing the ‘Visible Impact’ production with the cast and creative team has been truly transformative,” Lynskey said. “Together the Georgetown students, Gallaudet students and guest artists are not only creating a piece of theater — they are forging a community.”

Kaiser and fellow actor Evan Monad (COL ’14) described the writing process as extremely collaborative. The cast spent most of the six weeks leading up to the show writing the vignettes that comprise it, such as Kaiser’s monologue about her right hand “Crippy.” But as much as the process was about putting ideas to paper, it was about grappling with the ideas themselves. In a room filled with students and interpreters, the actors learned the meaning of the word “disability.” Or rather, they learned what it doesn’t mean.

“The Gallaudet students explained that they don’t see deafness as a disability,” Kaiser explained. Deafness, for them, does not impede their daily life. What, then, qualifies as a disability? “We talked about what words are OK to use, yet still none of us really know,” Quehrn said.

That lack of clarity was one of the driving forces behind her conception of the play, according to Lynskey. “We are challenging able-ism and audism and trying to take the lines drawn to categorize, marginalize and stigmatize people and reform those dividing lines into a circle,” she said.

Challenges were present on the set from day one. Quehrn recalls that it was initially awkward to attempt to communicate with the Gallaudet students. Now the entire cast can sign at a basic level. Developing this sense of community was crucial to the learning process, Lynskey said.

In the rehearsal room and the creation of the performance piece, access is not an afterthought, but an ethos. “We are engaging and embracing a practice of total communication wherein everything signed is voiced and everything voiced is signed,” Lynskey said. “In this we all are discovering the importance of interpretation and the limits of translation. It’s literally bringing worlds together with our ‘bare hands.’ And in so doing we are unearthing a greater communication that exists between people.”

As the students learned to challenge notions of disability, they began to understand the full spirit behind the play. According to Assistant Director Andy Stoffel (SFS ’12), “Visible Impact” is about starting a conversation. “The main point is trying to start talking about deafness and disability in society today. Many people are unaware of the struggle for disability rights.”

While many marginalized communities shared their voices through literature and art, Monod added, this is not true for the disabled community. “With other communities, you know what the arc of such art is going to be. With this, it’s very open,” he said. Part of that openness is using art to create a more positive view, Kaiser noted.

THE SIGNS OF THEIR STORIES

“Often you think about disability in a way like ‘how can I conquer this?’ You need to turn it into something positive,” Kaiser said. Part of that conquering was in telling her story, which details her own experience with cerebral palsy. In the vignette, Kaiser stands alone on stage. She recalls her previous relationships, and how she asked her boyfriends to hold her left hand because her right was wont to twitch and be clammy. Many of them told her that they forgot about it. And for a long time, that was what she wanted.

“Before this, I thought it could be minimized,” she said. Then, her current boyfriend took her right hand, kissed it and said that he loved her for it. “It really took that to make me realize that it wasn’t a weakness.”

Likewise, Monod has learned to embrace his cerebral palsy. An avid reader of Shakespeare, he presents a monologue from Richard III.

“I get what Richard, who is disabled, is saying. He’s asking ‘Can I get married? Can I have a kid? Can I have a normal life?’ I asked myself many of those same questions,” Monod said. “But my friends always joke that I am like Richard, without the villainous streak. That’s why my Richard III monologue melds into a romantic scene — I think it really captures my attitude.”

For Herrera, accepting and celebrating her deafness came through an even greater personal victory.

But challenging existing conceptions and embracing one’s lot isn’t easy. Monod jokes that he doesn’t really need to use the crutches he carries around, but they are a way of standing out.

“I always feel I need to overcompensate. I need to be better at realizing what I can and can’t handle,” Kaiser said, “I’m less comfortable displaying vulnerability than other people [are].”

Yet that is what “Visible Impact” is about. The disabled are vulnerable. They are everywhere, yet often they are ignored or reviled by others. One vignette traces the history of the treatment of disabled people, most infamously during the Holocaust. “We were the first to be killed,” the actress in the ensemble intones.

Today, their problems are not widely understood by the public, because it is unclear how much disability affects them.

For some, as seen in the play, disability is secondary. These characters are mothers and friends of the disabled. For some it is neurological. Some are affected by common disorders such as dyslexia or obsessive-compulsive disorder, and some have the less prevalent cerebral palsy.

But as Stoffel says, these issues can no longer be ignored. The “disabled” are everywhere. “Theater and arts are most valuable for society when they deal with issues that people are not comfortable talking about normally,” he said.

“Visible Impact” creates a sense of community for both the performers and the audience. Every scene is translated into sign language, and the audience is asked to participate in signing in the very first scene. The play melds the familiar — Shakespeare, The Invisible Man, Beethoven — with a concept not usually associated with these masterpieces. Yet as the play emphasizes, Beethoven was deaf. Richard III was a hunchback.

People with disabilities make up a third of the U.S. population. That, according to Lynskey, is key.

“In creating a ‘Visible Impact,’ a theatrical expression that probes the complex intersections of biology, culture and identity — the students in demanding an understanding and acceptance of ‘me’ — have found they’ve expanded the definition of ‘we.’”