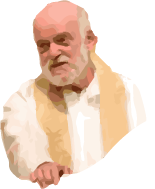 As the mourners settled back into the pews of Holy Trinity Church after receiving communion, 94 unseen voices rose in song. Heads turned toward the balcony, with slow smiles crossing the faces of the congregation upon recognition — the Chimes, active and alumni, singing “I’ll Fly Away,” had assembled to honor their Celestial Chime.

Rev. James P.M. Walsh, S.J., died July 1 at age 77, following a battle with myelofibrosis. His legacy is that of lyricism, through his music, his writings, his passions and his teachings.

A professor in the theology department, he received his doctoral training in Hebrew biblical studies at Harvard University, arriving at Georgetown in 1973. His academic work focused on social justice in the Old Testament, which formed the theme of his seminal work, “The Mighty From Their Thrones.”

At a university where many prominent figures have left indelible legacies, Walsh’s own was multifaceted, reverberating across his four decades and many yet to come, yet couched in his trademark humility and selflessness.

“At some of my most challenging moments, Jim was a gift to me, of friendship and love. … He was attuned to what was going on, he sought ways, he found ways to be a gift,” University President John J. DeGioia said at the July 8 memorial service. “What bound our relationship together is the understanding that God is our friend. God accepts us, knows us, loves us, and one can say the same about Jim.”

Walsh, a native of Wilkes-Barre, Penn., was drawn to the priesthood from an early age, entering the Society of Jesus upon graduation from his Scranton high school.

“He wasn’t in any way a pious man — he was a deeply religious man, a man of great faith, but I think piety for him was not something that he would emulate, and I mean that as a compliment,” David Murphy (CAS ’73), who befriended Walsh as a Chimes alumnus, said.

Endowed with his Harvard degree, Walsh was part of a transformative generation of scholars.

“He exemplifies a generation of Jesuits who were some of the first to get absolutely top academic degrees,” Fr. Matthew Carnes, S.J., said. “That generation helped us move from being regional colleges to being research universities.”

Although his own canon of published work was smaller than that of many of today’s academics, his intelligence and dedication to scholarship has yielded dozens of books in theology and philosophy edited, uncredited, by his hand.

“As a young scholar you’re kind of nervous how your work’s going to be received and how you’re going to be received at your first job. This was my first academic job. He just couldn’t have been more of a generous senior colleague,” Tod Linafelt, a theology professor who shared the same field, said of Walsh, who served as an informal mentor when Linafelt arrived in 1996. “Both personally, he was very encouraging in terms of teaching and scholarship, but also, he would read my work and even though it was very different from the sort of stuff he would do, he was very generous and welcoming and would have substantive responses to the work, which was not always the case with colleagues, and especially with that generational difference.”

DeGioia revealed that Walsh had just finished a draft of a book on the subject of imagination, a commitment to which he consistently stressed and epitomized.

“He devoted his life to being a sort of personal trainer of our imaginations,” Mark Ouweleen (CAS ’86), a Chimes alumnus, eulogized at the service. “His first lesson was humility — you may not be the center of the universe, an important lesson for Chimes.”

This emphasis on imagination was reflected in his teachings.

“For Jim, Georgetown was first a community of learning, at the heart of which was a deeper community of service and love. Like all communities, Jim insisted that its members owed something to each other,” David Fitzgerald (COL ’91), a Chimes alumnus who took classes with Walsh, wrote in an email. “Teachers had a responsibility to constantly invite students into a conversation about learning. It was OK for students to bring their biases and preconceived notions to the conversation. That’s what made the learning interesting. But, in the end, students had a responsibility to be humble, to listen, to seek for understanding and not validation and certainly not accreditation.”

His instruction continued outside the classroom, in subtle ways.

“Our road trips with Jim were a rolling symposia. Our car was a bubble where it was OK for adolescents to be excited about theology [and the other humanities],” Ouweleen, who described Walsh as “a sort of Willie Nelson muppet of a priest” said.

A Campus, Made Home

A tracing of any aspect of campus life would reveal the influence or participation of a man many knew simply as “Jim.”

In addition to Chimes paraphernalia, photographs and several flower arrangements sent from university offices and families, a Patrick Healy Award, an award for service to varsity athletics and a certificate of recognition from the Office of Admissions lay on display at Walsh’s Wolfington Hall wake.

For years, Walsh served as the announcer for women’s basketball games. Each year, he would grow out his beard, ready to play Santa Claus at the faculty Christmas party.

“He wasn’t your typical Claus. I remember him, in response to one child pulling on his beard, asking, ‘Are you real?’” DeGioia recounted. “Jim, channelling some existentialism, said, ‘What is real?’”

His effect on all students who have passed through the front gates since 1989 is cemented in his preamble to the university’s first free speech and expression policy, espousing a commitment to conversation.

“A university is many things but central to its being is discourse, discussion, debate: the untrammeled expression of ideas and information,” Walsh wrote.

In a Tropaia Ceremony speech three years before, upon winning the 1986 Bunn Award for Faculty Excellence, Walsh emphasized the confluence of education and conversation.

Walsh continued to champion these ideals in the 25 years following the policy’s publication.

“He became the symbolic sort of fountain of wisdom around us, so people would consult him to talk about what speech meant; it wasn’t like a regular review board,” Carnes, who currently serves on the speech and expression committee, said. “When he was consulted, it was mainly around: ‘You inspired us with this, how do you look at this situation?’ and he would give some ideas, and then the administrators had to implement them.”

Through both the Jesuit order and his own kin, Walsh was drawn to families.

“As a child, having an uncle who was a priest and could celebrate Mass at the house in 20 minutes or less meant we could play more,” Joseph Walsh, his nephew, said at the memorial service, detailing Walsh’s importance at different stages of his life. “He was often there to talk with or just listen to during hard times.”

Perhaps Walsh’s most high-profile familial affiliation was that with the Georgetown Chimes, the famed all-male a cappella group of nearly seven decades.

Walsh joined the Chimes in 1980 as a neophyte, setting up Cherry Tree Massacre stages and fetching beers alongside 18-year-olds — a process he insisted on going through.

“My first introduction to Jim Walsh and to the Jesuit tradition of Georgetown is that there was this professor, with a Ph.D., clearly an adult, one of the smartest human beings on the planet, and he was going through the same neophyte process that I was going through,” Mark Grannis (CAS ’85) said. “The humility that showed was really striking.”

Upon his full induction to the group, Walsh refused to wield power over younger members.

“Right when he got in the group, he was the adult in the room. He was the professor at Georgetown, and yet, he wanted to be treated as a student. When issues come up with the Chimes, and the active group is trying to decide something, everybody’s got a voice,” Tim Naughton (CAS ’77), who took Walsh’s freshman theology class in 1973, said. “Sometimes what the group did, he thought was nuts. But it was what the group, you know, voted to do. So Jim didn’t want to get in the way of that. It was only in the worst examples of that that Jim would offer this question: ‘Do you think that X might be upset by that?’”

“He was sort of the conscience, but he sort of understood that he should let the group take charge,” current Chimes Ephus Connor Joseph (COL ’16) said.

Walsh was a fixture at Chimes’ retreats and reunions, and presided over countless marriages and baptisms of alumni and their children.

“He saw Chimes and Chimes’ kids go through the group,” current Chime Duncan Peacock (COL ’16), whose father George (CAS ’84) was also a Chime, said. “He was the one constant for a group that was ever-changing.”

“Jim wanted to be wherever we were all the time. He wanted to immerse himself in all of his human relationships. And he was just incredibly selfless in the way he did that,” Grannis said.

Walsh effortlessly straddled the lines between teacher, friend and priest.

“I would say that religiously speaking he was so human and such a good friend and so much a contemporary of ours, but at the same time, still very much the Jesuit, very much trying to exemplify how our lives should be led, and it was important to him, and he was a real connection for me in my faith,” Kris Murphy, David’s wife, said.

Coming from a family of many Hoyas, Bridget Morton (MSB ’16) grew up hearing stories of “the incredible Father Walsh.”

“My mom and aunt had talked about him being the teacher of a lifetime. I didn’t really buy it until I took the class,” she said. “It was one of those things where he was a unique combination of an educator who cared incredibly deeply about his students on a really personal, authentic level, all at the same time expecting academic and intellectual excellence.”

Walsh was omnipresent and invaluable to all those he encountered, whether through personal relationships or implicitly through his scholarship and impact on the university.

“In the stories of all our lives, Jim shows up in an impossible number of important scenes. … And now, just like that, he’s out of the picture. In fact, I think this funeral is the first big event he’s missed,” Ouweleen said. “I wonder if our sadness itself may be a failure of our imagination. … What if there was a playful God who loved us so, he sent us Jim Walsh?”