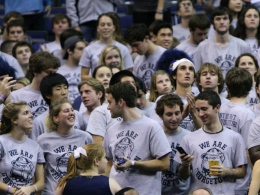 Unclaimed men’s basketball student section tickets are donated to local community groups and resold to members of the university community, giving area residents a unique opportunity not only to experience Hoya basketball, but also boosting revenues for the university.

Tickets to the games that occur over Thanksgiving, winter and spring breaks are not included in student season ticket packets, although the price is included in the cost of season tickets. The nearly 3,000 students who purchased season tickets this year were required to pick up tickets for the five games that occurred over breaks at the McDonough Gymnasium box office. Some tickets that are not claimed are donated to youth groups, church groups, and other community groups, as well as the “Kids and Cops” program, in which tickets are donated to D.C.-area youth through local police precincts, according to Sports Information Director Mex Carey.

The rest of the tickets are resold at a discount to university faculty and staff families who are members of the Hoya Kids Club and members of the DC Hoyas Alumni Club.

“The athletics department aims to provide the best home court experience for our team and for our fans,” Carey said. “As such, we strive to fill any seats not occupied by students with as many Hoya supporters as possible.”

Despite this, Carey said the university does not profit twice off of the same ticket.

Carey said that approximately 150 students picked up tickets for the Nov. 28 game against Lafayette, about 400 for the games against Harvard and St. John’s, and about 600 for the game against UConn. The Hoyas play Cincinnati in their regular-season finale on Mar. 6, which falls during spring break.

The DC Hoyas Alumni Club Web site offers tickets for the game against Cincinnati for sale to members at $40 each for lower level seats and $25 each for upper level seats. The Web site appears to indicate that the tickets are for seats in the student section, and the same offer was made for the Jan. 9 game against UConn.

“The Club has obtained lower level tickets for both match-ups since the students will be away on break,” the site said.

The tickets have been on sale since Nov. 16, according to the site.

A representative of the club did not respond to a request for comment.

The university is also requiring students to pick up tickets for Saturday’s game against Duke, although Carey said unclaimed tickets would not be resold.

“The number picked up will simply be used to properly configure the upper level student season ticket holder sections in order to provide the best experience for all fans at Verizon Center,” he said.

Several season ticket holders did not seem to mind the university’s policy.

“It’s a business and they have to make a profit,” said Nathan Pippenger (COL ’10). “I don’t have any problem with it.”

“I appreciate the fact that they donate to the community,” said Maggie Larkin (COL ’13). “We could always use more Hoya fans.”

“I think it’s kind of weird that we have to go out of our way to get [the tickets], because at the end of the day, we’re paying for those tickets,” Lawrence said.”