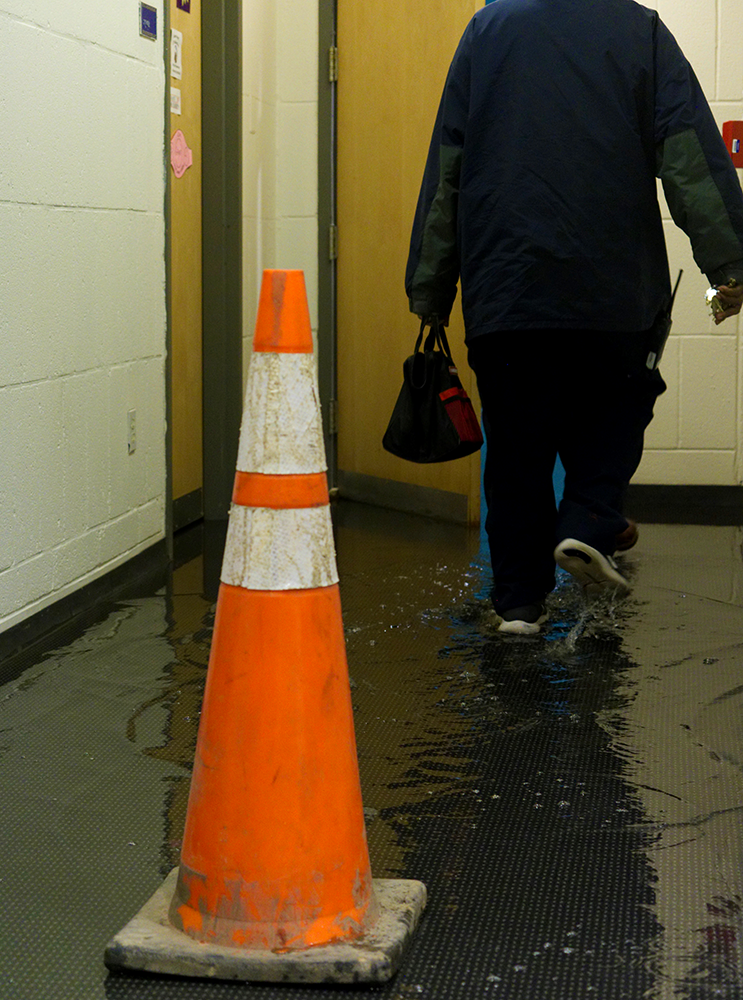 The smooth operations of Georgetown University’s maintenance rely on employees of the Office of Planning and Facilities Management to respond to work requests. Yet several of these workers feel overworked, underpaid and unprotected against mistreatment by their management team.

Under a new trade-based work delegation, facilities workers have faced a large number of work requests and insufficient institutional support for addressing work-related grievances, as two anonymous employees, referred to by the pseudonyms Leo and Sam, said in interviews with The Hoya.

A Shift in Strategy

From 2014 to 2017, facilities shifted delegation of work requests from a zone-based to a trade-based structure, according to former interim Vice President of Planning and Facilities Management Greg Simmons.

Under the zone-based system, workers were responsible for maintenance tasks in specific buildings, while the trade-based structure allocates duties based on workers’ skill specialization.

During this transition, Robin Morey served as the vice president of planning and facilities management. Morey left in July 2018, and Simmons filled the role until Benjamin Kuo took office Dec. 1.

As facilities transitioned to trade-based delegation, however, workers felt a significant shift in their roles without preparation or support.

For example, the trade-based structure placed Sam — a general building maintenance worker before the switch — in the plumbing skill shop, without the training or wage increase associated with skill specialization. A skill shop is a department within facilities that includes workers to reflect their area of expertise.

“As a building maintenance worker, you’re not allowed to be in a skilled shop,” Sam said. “You need a certain certificate in order to do it. Before they changed it around, if I would’ve wanted to go to that skill shop, I would have to go to school and get trained. They just moved us and put us in the skilled shop with no training, no nothing. It’s a safety issue.”

Yet the building workers forced into skill shops have not received the pay of certified technicians, according to Leo.

“I feel sorry for the guys,” Leo said. “I’m in the [air conditioning] classification, I get paid as an AC technician. But, the guys in the lower level are doing the AC job, but they are not getting paid for it as AC workers.”

Georgetown, however, says it “remains committed to ensuring staff are equipped with the resources, training and tools needed to support their respective teams,” Simmons wrote.

In the previous, zone-based system, building maintenance workers were responsible for maintaining either an academic or residential building. Now, workers have to cross campus to fulfill tasks in multiple buildings, according to Sam.

“When they put us in skilled shops and took us out of zones, now every worker has to go work academic and residential,” Sam said.

Georgetown’s new system, combined with understaffing, has exacerbated the burden on workers to complete work orders in a timely manner, according to Leo.

“They overload us with more work,” Leo said. “That affects us, because when they centralize everything, now we have to run from building to building.”

The office currently employs 21 workers, and the administration is actively trying to fill three vacancies within the shop, according to a university representative.

Leo, however, claims there were 30 AC technicians before Morey took over facilities in 2012. Currently, 12 or 13 workers are classified in the AC realm, according to Leo.

“A couple of them are very old guys, so we don’t count on them — they barely move around,” he said. “People have died, people have retired — and they have never hired people again.”

The trade-based system and understaffing not only affect the workers but also hamper maintenance work vital to campus equipment, students and building infrastructure.

“With the small amount of personnel, the AC equipment at Georgetown is not well-maintained,” Leo said. “A few months ago, I got sick, and I was out for two weeks. Nobody did my tickets. There was a student in Village B without cooling for almost three months — nobody came over.”

An Outlet for Help?

Leo and Sam both suggested the university’s institutional support systems were apathetic to their work-related grievances about hostile management.

“I want students to know about the discrimination, the retaliation and the bullying from that management team,” Sam said. “That’s a constant thing. If you talk to a lot of workers now, there are a lot of workers who have been here and have enjoyed their job and loved coming to work — don’t want to come to work anymore.”

Workers are able to file an official complaint or seek help through institutional resources such as human resources, the Office of Institutional Diversity, Equity and Affirmative Action, or the 1199SEIU labor union.

Within HR, workers must fill out a grievance form and work with Roberta Kelley Paul, university director for employee relations and engagement, for next steps.

Paul, however, does not adequately follow through on workers’ grievances, according to Sam.

“She is supposed to contact the union office, about any changes to union workers and any issues,” Sam said. “She has not complied at all. She is the one who created the hostile environment, because we reported these issues and our concerns — and they were very serious issues, when it came to being bullied and intimidated [by managers]. She has done nothing.”

For example, there have been over 30 grievances filed against Robert Davis, the associate director of facilities operations, yet there has been no official action taken, according to Sam.

Racial discrimination, unprofessionalism and public harassment were among the complaints workers, including Sam and Leo, filed — to no avail.

Georgetown did not comment on Paul and Davis’ specific case. Instead, university spokesperson Matt Hill affirmed the role of the IDEAA office as a resource for workers.

“While we cannot comment on private personnel matters, we follow the grievance process outlined in the collective bargaining agreement between the university and the union,” Hill wrote in an email to The Hoya. “The university thoroughly and promptly investigates and addresses all complaints through Human Resources, Office of Institutional Diversity, Equity and Affirmative Action, and other offices as appropriate.”

The workers’ distrust of institutional support is also rooted in perceived disloyalty from their union.

The 1199SEIU labor union strives to represent workers through the collective bargaining agreement set with Georgetown to negotiate for workers’ rights, according to Yahnae Barner, senior labor union organizer at 1199SEIU.

“1199SEIU is a leader on social justice issues in Maryland and the District of Columbia,” Barner wrote in an email to The Hoya. “We are devoted to advancing the economic interests of our members and all working people.”

1199SEIU delegates are employees elected by their peers to represent and mobilize their fellow workers. However, Leo believes that these representatives lack the strength to criticize the university because of their employment status.

“They don’t get paid from the union; they are employees like us,” Leo said. “They are not strong enough to fight the case. Sometimes they give up; most of the time they don’t get backup from the main union organizers.”

Barner, however, claims the union cares most about its members — the workers.

“The only ties [we] have with University is our members, their employees,” Barner wrote. “We hope to have a healthy relationship with the University, but our focus is to ensure members rights are upheld and the contract is followed.”

Yet Leo feels institutional advocates are not doing enough for workers. “Most of the time the union and human resources are in favor of the management.” Leo said. “We basically have no way for justice.”

Outside of institutional resources, workers can turn to student advocacy groups for help. The Georgetown Solidarity Committee attempts to mobilize student-worker power by creating dialogue between the university and workers, according to GSC member Obed Ventura (SFS ’19).

“We try to organize direct actions in order to pressure the university to even speak to workers,” Ventura said. “It’s important for students to get involved with workers because they’re people, too. Everyone who contributes to making the Hilltop the community that it is deserve respect and dignity.”

In the past, GSC has helped advocate for the unionization of Georgetown graduate students with the Georgetown Alliance of Graduate Employees and fought for proper job relocation with Bulldog Tavern earlier this year.

Students are instrumental to improving the worker experience at Georgetown, according to Sam.

“Working with the students, that saved my day,” Sam said. “They have been a great help — big fighters for us union workers and facilities workers. Whenever we needed them, they were always there.”

The workers feel optimistic that Kuo, the new facilities VP, will respond to their complaints about the trade-based maintenance structure.

“I bet if you talk to workers now, they’ll say they’re happy, because change is coming,” Sam said. “I had confidence that change would come, because I was fighting. We see the change coming, but what we went through — we went through a lot.”

“I look forward to working with the Planning and Facilities Management team to develop specific goals and a strategic plan to best meet all of our needs,” Kuo wrote in an email to The Hoya. “I hope to foster a tight-knit team, continue the department’s sense of dedication and service towards the campus community, and strive for continued improvements.”

Yet the university maintains that the trade-based structure is here to stay: Facilities is continuing its current trade-based reporting structure, according to a university spokesperson.