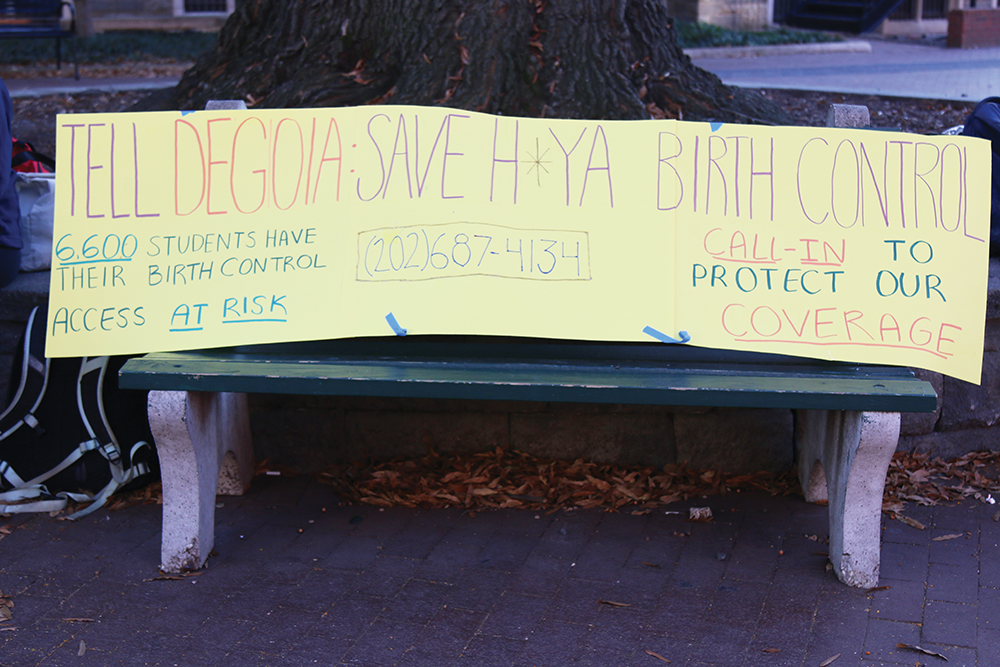 Georgetown University health insurance plans are continuing to cover contraception, despite a religious exemption from coverage requirements, following an advocacy campaign led by members of the student group H*yas for Choice.

Two rules issued by the administration of President Donald Trump on Oct. 6 rolled back a mandate of the Affordable Care Act, former President Barack Obama’s signature health care law, which required most employers to cover contraception in employer-provided health insurance plans. The Trump administration’s rollback expanded the list of organizations that can claim religious exemptions to the mandate to include nonprofit organizations, for-profit companies and religious institutions of higher education such as Georgetown.

The decision was made public in an unannounced update to the student health website Dec. 1. Under Georgetown’s religious accommodation, university funds still will not be used to fund contraceptive services provided in the plans, according to Rachel Pugh, the university’s senior director for strategic communications.

“UnitedHealthcare will provide separate payments for contraceptive services that plan participants use, without cost sharing and at no other cost to plan participants. Georgetown will not administer or fund these payments,” Pugh wrote in an email to The Hoya.

The university’s decision follows a campaign led by members of H*yas for Choice, an unrecognized student group that advocates for abortion and reproductive rights, who demanded the university maintain birth control coverage. On Nov. 13, students delivered an open letter to the office of University President John J. DeGioia and other administrators calling for continued contraceptive coverage.

“What the letter told the university is that students are watching. They do absolutely care about this process; they know what’s going on and expect accountability from the university,” Lewis said.

The letter called on the administration to clarify its position by Dec. 1. The university updated the student health insurance website that morning, prompting H*yas for Choice to cancel a call-in campaign — planned for that afternoon — demanding a response from the university. The university has not publicized the change with an announcement.

Annie Mason (COL ’18), H*yas for Choice co-president, said the administration may have avoided speaking out about its continued contraception coverage to avoid unwarranted press attention.

“Frankly, what happened was that the policy didn’t change. They didn’t necessarily need to tell anyone about that. I think the reason we haven’t seen a statement — despite the fact that DeGioia has given out statements on tax policy, on DACA, on a whole bunch of other things, but not Title IX — I think the reason that he doesn’t want to give this big statement is because they don’t want to make a big deal out of it, because they do want to avoid that kind of press coverage,” Mason said.

“Georgetown’s Student Health Center does provide certain types of contraception to students if they indicate conditions including acne, irregular periods, heavy periods, cramps and polycystic ovarian syndrome,” Levy wrote in an email to The Hoya. “It only makes sense that the University’s health insurance plans would cover these critical services.”

“Graduate students in particular are a significant portion of the Georgetown insurance users, and birth control is, for many, an essential part of the reason they need insurance coverage,” Mandwee wrote in an email to The Hoya. “This coverage shows that Georgetown is genuine in its goal to take care of the whole person.”

“Even those grads who want to get pregnant and have children while in grad school find that the health care and benefits Georgetown offers to grads aren’t good enough to make that choice viable,” Huget wrote in an email to The Hoya. “So many of us need contraceptive coverage because Georgetown itself doesn’t do very good job supporting grad workers who are pregnant or parents of young children.”

Other Catholic universities have had to deal with the controversy over contraception coverage. The University of Notre Dame chose to end birth control coverage in October, but reversed its decision Nov. 7 after student backlash. Mason speculated that Georgetown might have taken possible backlash into account when deciding to maintain its contraceptive coverage.

“I think one of the things that had the largest influence — and this is me speculating — is the fact that Notre Dame tried to change their policy and there was huge backlash, national coverage about the issue, and they ended up changing their minds and going back on it anyway,” Mason said.