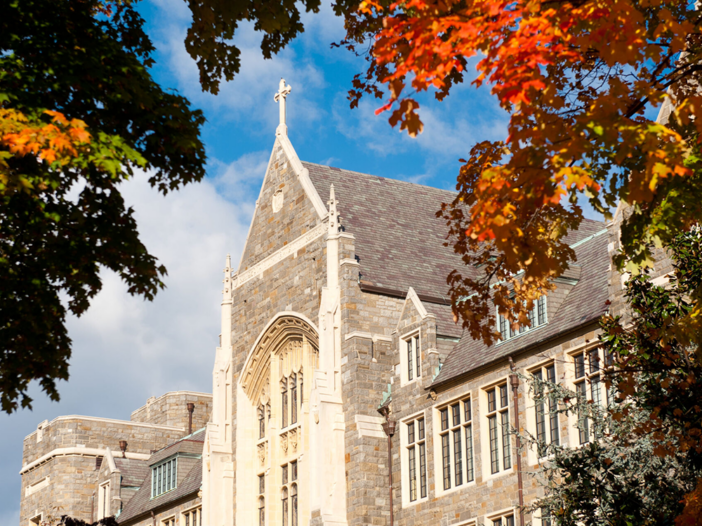 The open letter, released Nov. 23, has garnered over 200 signatures from Georgetown faculty, graduates and current students. The letter petitioned senior university administrators to develop a set of transparent criteria in order to vet officials involved in the Trump administration before being approved for visiting appointments or high-profile speaking engagements. The letter appeals to the necessity of developing these criteria by claiming the actions of many officials who had served in the previous administration were incompatible with Georgetown’s values and therefore undeserving of the platform Georgetown’s campus offers.

Georgetown’s location in the nation’s capital makes it especially important for the university administration to reconsider campus invitations and appointments, according to Jeffrey Anderson, a professor in the SFS and the department of government who helped draft the letter.

“With Inauguration Day approaching in January, we thought it appropriate to ask our university higher administration to reflect on the criteria we apply as a university to these kinds of invitations,” Anderson wrote in an email to The Hoya. “The reason: unlike every single past presidential transition, this one has been questioned and undermined at every step by the outgoing Administration.”

The authors wrote that their intent is not to curtail free speech on campus or to advocate for a general ban on Trump administration officials. Rather, the purpose of the letter is to highlight the need for a critical examination of speaker invitation policies by university administrators.

“We are simply pointing out the urgent need for reflection by senior University administrators, who ultimately have the power to approve visiting appointments as well as high-profile public speakers, about how our firmly established and revered Georgetown values will inform the manner in which we as a University interact with officials who served in this Administration,” the letter reads.

Georgetown College Republicans member Dalton Nunamaker (COL ’22), though not speaking on behalf of the organization, said the letter seeks to go against Georgetown’s values because it perpetuates political divisions.

“As anyone who truly knows our community will attest, conservatives like myself bring a lot of important ideas and perspectives to Georgetown,” Nunamaker wrote in an email to The Hoya. “Isolating half of the nation through an ideological purity test will only worsen existing echo chambers on the hilltop and drag us farther from the ideals of a free and compassionate society that we all seek.”

A universal ban on all Trump appointees would not reflect Georgetown’s values, according to letter signatory Mark Rom, an associate professor in the McCourt School of Public Policy.

“There might be some in the Georgetown community who believe that *anyone* who worked for the Trump administration should be, by definition, barred from our campus,” Rom wrote in an email to The Hoya. “Barring all Trump appointees would not reflect Georgetown discernment.”

However, Nunamaker wrote that implementing this criteria would still stifle political dialogue, and banning any administrative officials would create a dangerous precedent.

“Our differences should bring us to the table together for healthy debate, not split us into irreconcilable factions,” Nunamaker wrote. “Georgetown will not be served by branding members of any administration as untouchables.”

The drafters’ current goal is to raise awareness of the open letter among members of the Georgetown community before formally presenting new standards to invite speakers and appoint faculty members to University President John J. DeGioia (CAS ’79, GRD ’95) and the university’s administration.

“Our main objective right now is to disseminate the letter as widely as possible among the members of the Georgetown community, including current students and alumni,” Anderson wrote. “With this open letter, we’re hoping to raise awareness among decision-makers at all levels of the university about the need to pause and reflect before clicking on the send button for that invitation.”

A university spokesperson declined to comment on the open letter when contacted by The Hoya.

Inspiration for the open letter came from a similar initiative drafted by Harvard University community members calling on school leadership to refrain from hiring members of the Trump administration or inviting them to speak on campus, according to the Georgetown letter. Both Georgetown’s and Harvard’s letters state that the Trump administration has sought to disrupt a peaceful transfer of power, and inviting former members to speak on campus would legitimize Trump’s behavior.

While the Harvard letter places an emphasis on graduates who have served in the Trump administration, the Georgetown letter focuses more broadly on high-profile officials who are typically invited to campus following a presidential transition. In 2016, the Georgetown Institute of Politics and Public Service hosted “The Exit Interview,” a six-part lecture series discussing outgoing outgoing President Barack Obama’s legacy with his administrators, such as National Security Advisor Susan Rice. Anderson attributed this difference to Georgetown’s location in the nation’s capital.

“We’re 2.5 miles from the White House, while Harvard is 438 miles away,” Anderson wrote. “Georgetown University has always benefited from its location here in Washington, DC and its proximity, both literally and figuratively, to the centers of political power in the nation’s capital. In the past, the University has welcomed to campus prominent former government officials, who have delivered prestigious addresses to the community and who have held longer-term visiting appointments as both faculty and fellows.”

“Georgetown has an extensive (and appropriate!) set of standards to vette those who wish to give money to Georgetown,” Rom wrote. “It is important that Georgetown have the same standards regarding speakers/visitors/faculty/fellows, etc. That you are rich, or famous, or powerful, are insufficient grounds.”