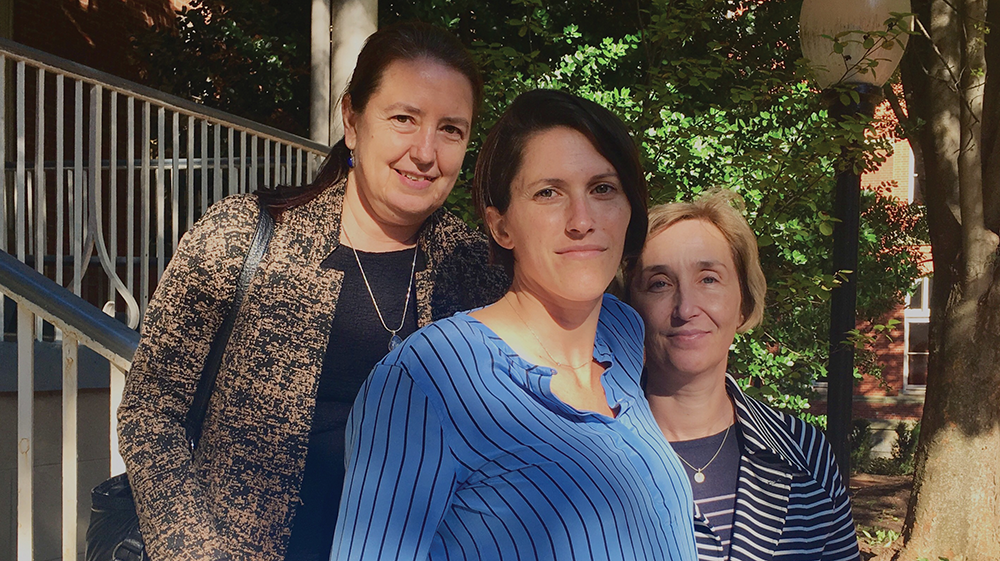 The petition asks for the allotted eight weeks to be increased to a semester for full-time non-tenure-line faculty and include maternal and paternal leave. Created by the Joint Main Campus Committee on Full-Time Non-Tenure Line Issues, a nine-member committee for themain campus that addresses issues affecting full-time non-tenure-line faculty, the petition seeks a decision on the issue by the end of the semester.

“We’re not asking for any new structure or something really new — we’re just saying we’re also faculty and just include us in the benefits,” Astrid Weigert, chair of the Joint Main Campus Committee on Full-Time Non-Tenure Line Issues, said in an interview with The Hoya. “We really feel a sense of urgency about this because people try to plan their lives and their pregnancies.”

“We appreciate the important role of full-time faculty members on our campus, including those who are primarily engaged in teaching. We have received a request, initiated by the Joint Committee on Full Time Non-Tenure Line Faculty, which calls for all full-time faculty members on the Main Campus to receive the same new parent leave benefits,” Groves wrote. “This is a reasonable proposal that deserves prompt consideration, and we will expedite its consideration by the Benefits Advisory Committee and other appropriate faculty consultative bodies.”

The group raised the issue to the provost’s office at the annual faculty town hall meeting every year for the past four years, in faculty senate meetings and the main campus executive faculty before deciding to draft a petition, Weigert said.

“Every time we got the reply ‘we are working on it,’ but nothing happened,” Weigert said. “We needed to show that there is really a very strong support for this petition among faculty.”

Before the positions were differentiated in 2001, full-time non-tenure-line professors were considered “visiting,” a confusing definition as many stayed at Georgetown for extended periods of time, Weigert said.

“Both groups are essential and complement each other, allowing us to achieve the mission of the University,” a university spokesperson said in a statement to The Hoya.

The leave for non-tenure-line faculty is covered under short-term disability insurance and applies to pregnant mothers.

Tenure-line leave, conversely, applies to the primary caregiver of a child under 1 year old, or under 5 years old and new to the home, according to the Office of Faculty and Staff Benefits, meaning it also applies to new fathers or adoptive parents.

At The George Washington University, a regular, active full-time member of the faculty is granted one semester of paid parental leave, according to the provost office of GWU. A “regular” faculty member can be tenure or non-tenure track, according to the GWU faculty code.

Science, technology and international affairs professor Clare Fieseler (SFS ’06) is a full-time non-tenure-line faculty member and is 34 weeks pregnant. She signed the petition because it relates to her directly, Fieseler said in an interview with The Hoya.

“To have such stark discrepancy in the benefits is really striking, especially at a place like Georgetown,” Fieseler said.

James Sandefur, committee member and former chair of the department of mathematics and statistics, considers educational continuity as one of the key reasons to improve parental leave for non-tenure-line faculty.

Sandefur suspects the discrepancy in benefits is rooted in the pre-2001 faculty member definitions. However, Sandefur said, the issue should have been resolved long ago.

“It’s amazing it has gone on this long,” Sandefur said in an interview with The Hoya. “This petition should have come out in 2002.”

Weigert has been working to improve non-tenure-line parental leave for at least four years, she said. Although the Joint Main Campus Committee on Full-Time Non-Tenure Line Issues was established in 2016, Weigert and a group of interested faculty attempted to adjust the benefits through bringing up the topic at senate meetings and the annual faculty townhall.

“We have had the parental leave item on the Committee agenda since the first day I attended,” Trujillo wrote in an email to The Hoya.

Weigert opened the petition Oct. 2 and began circulating it Oct. 4. The petition closed Oct. 15, receiving 282 signatures in the time that it was open. Weigert is pleased with the response, she said, as she set the petition’s goal at 300 signatures, roughly the number of full-time non-tenure-line faculty.

“I’ve signed some petitions at Georgetown but they were always for DACA issues or kind of larger societal issues that impact the campus, but I’ve never seen a petition that was about some benefits issue, so I had no idea how it would go,” Weigert said. “It was amazing.”