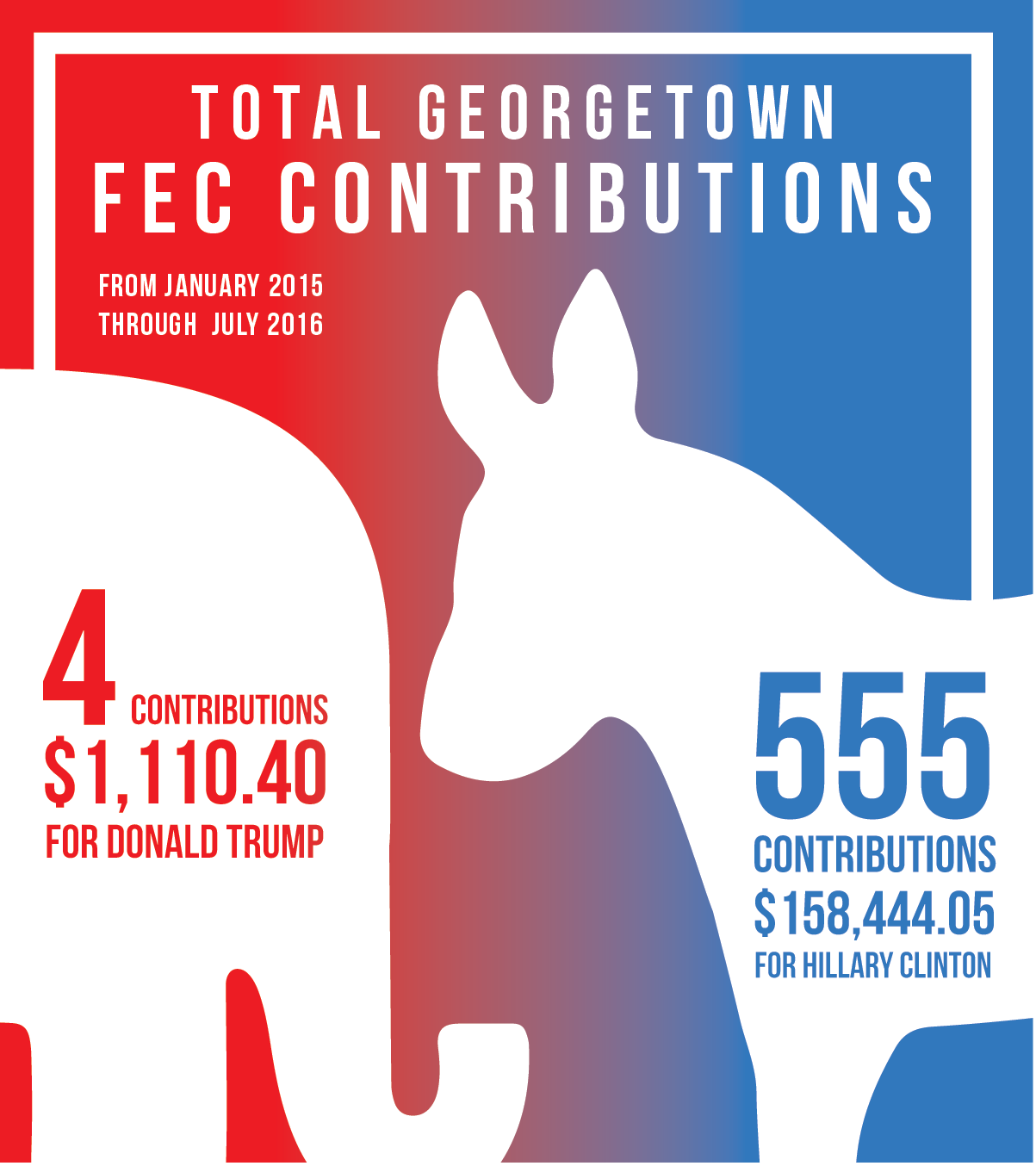 A total of 153 Georgetown faculty and staff donated about $206,000 to presidential campaign organizations or affiliated super PACs from January 2015 through July 2016 according to the analysis.

Seventy-four Georgetown community members donated $5,211.86 to Sanders, while one person donated $500 to O’Malley.

Trump’s four donors from Georgetown’s faculty and staff included a web developer, a tax analyst and two registered nurses, while Clinton’s included a variety of administrators and professors.

All FEC donations are publicly available online and are not anonymous.

Senior Director for Strategic Communications Rachel Pugh said Georgetown is unable to be associated with political campaigns, but encourages faculty, staff and students to be involved in politics in a personal capacity.

“All members of our community are free to contribute personal funds to support candidates or causes of their choice,” Pugh wrote in an email to The Hoya. “While there are restrictions on the use of university funds to support partisan political campaign activity, as long as faculty and staff are acting in their personal capacities, the university does not restrict, monitor, or interfere with their political contributions.”

Government professor James Lengle said the data does not necessarily suggest that Georgetown faculty and staff are liberal.

“We were surprised the Republican donations were even that high,” Estes said. “I think you find without a doubt that in classes that shouldn’t even have a political tone to it, somehow politics comes up.”

For government professor Matthew Kroenig, who served as a senior national security adviser to the Marco Rubio and Scott Walker campaigns this election cycle and who donated to Republican Wisconsin congressional candidate Mike Gallagher, the FEC data reflects a broader liberal bias in academia across the country.

Kroenig said he believes a bias within the faculty could impact the education that students receive.

“I do think that liberals and conservatives tend to see the world in fundamentally different ways,” Kroenig said. “If the faculty is all on one side of that equation, I think at a minimum you’re going to be missing the perspective on the other side, and I think that will color the nature of the education.”

According to Kroenig, the problem is not with professors expressing their opinions to students but with the ideological makeup of the faculty as a whole.

“If all of the analysis and viewpoints and subjective perceptions students are getting tend to be from one side, I think we’re doing a disservice to students because they aren’t understanding that other side,” Kroenig said.

McCourt School of Public Policy professor Lynn Ross said there is evidence that college faculty are largely liberal-minded but said this ideology rarely seeps into the classroom.

“My definition of professional comportment in the classroom is that my political views don’t really matter,” Ross said. “I am certainly not ever, nor do I want to be, in the position to prosthelytize or convince students of one viewpoint or another.”

According to Ross, who teaches courses on public management, her students often would not be able to tell whether she is liberal or conservative because of the way she approaches her lectures.

“If students have a particular point of view, I view my position as playing devil’s advocate,” Ross said. “If they’re liberal I become a conservative, and if they’re conservative I become a liberal.”

Ross said that, if Georgetown indeed has a largely liberal bias, the solution is to have more educated voices on the other side.

“What we probably need is more people of the minority view to balance things out,” Ross said. “If [someone] is arguing that there is a bias that teachers are imparting with their political views, I would say that what we need to do is get more of those biases so they can cancel each other out.”

Lengle said he has encountered this diverse array of opinions in the government department.

“In my department all I can say is that there is a vast range of political opinions, and I think that’s what makes for a good department. That diversity of opinion ends up in the classroom, and that promotes the educational process,” Lengle said. “The whole point of the educational process is the exchange of different ideas in search of the truth.”