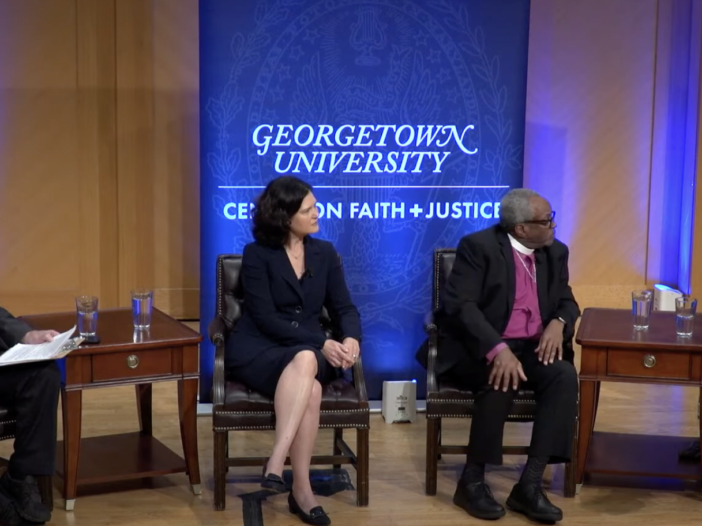 The Georgetown University Center on Faith and Justice hosted three religious experts for a panel discussion examining the consequences of the proliferation of white Christian nationalism ahead of the November midterm elections.

The Oct. 26 panel featured Reverend Michael B. Curry, the Presiding Bishop of the Episcopal Church, Amanda Tyler (SFS ’00), the executive director of the Baptist Joint Committee for Religious Liberty and Samuel Perry, an associate professor in the department of sociology at the University of Oklahoma. The Center on Faith and Justice director, Reverend Jim Wallis, moderated the discussion.

From 2012 to 2021, right-wing extremists, most of whom were white nationalists, committed almost 75% of the murders that were classified as domestic terrorism in the U.S. At the same time, an Oct. 27 Pew Research survey found that more than half of U.S. adults have not heard or read anything about Christian nationalism.

Wallis said the center made an effort to select speakers from diverse areas of expertise when organizing the event.

“We didn’t know how well White Christian Nationalism is understood on campus and in the wider community, so we wanted to include a broad range of voices to help explain both what it is and why it’s so dangerous to our democracy,” Wallis wrote to The Hoya. “We thought each of the panelists could address those questions from different perspectives.”

“It is an ideology that idealizes and advocates a fusion of American civic life with a kind of Christianity that isn’t characterized by giving my life to Jesus or wanting to be a good disciple, but is about white Christian ethnoculture,” Perry said at the event. “It is also a political strategy, and increasingly a political strategy that is leveraged by people who don’t have to believe the ideology.”

Reverend Curry emphasized the importance of separating white Christian nationalism from Christianity as a religion.

Curry spoke about how long this conflation of religion and white nationalist ideology has been prevalent, as the Ku Klux Klan co-opted Christianity as a justification for their ideology in the early 20th century.

Lauren Freed (NHS ’26) said she attended the event to better understand the context behind the effects of white Christian nationalism that she has personally felt as a Jewish American.

“Democratic institution is very important to me and how I identify as an American,” Freed told The Hoya. “Seeing people wearing shirts like ‘six million weren’t enough’ and White Christian Nationalists at the Charlottesville neo-Nazi rally has been deeply offensive to me.”

According to Freed, the speakers helped to reconcile the contradictions with people who allege to follow the Christian faith but fail to live out her understanding of Biblical ideals.

“I’ve been very confused by how people can perpetuate anti-Semitic messages while also professing to follow the Gospel’s messages,” Freed said. “It was nice to hear the speakers at the event, especially Reverend Curry as the Head of the Episcopal Church, call out hateful rhetoric and detestable actions as not representative of the true essence of the Christian faith.”

Speakers called for community members to work together in dismantling the divisions white Christian nationalism has caused.

“Silence is complicity so we have a moral obligation to speak out,” Tyler said at the event. “To be political is not the problem, but the problem is when you insist that the government reflect your theological views or think that only people who are like me religiously belong fully in the country.”