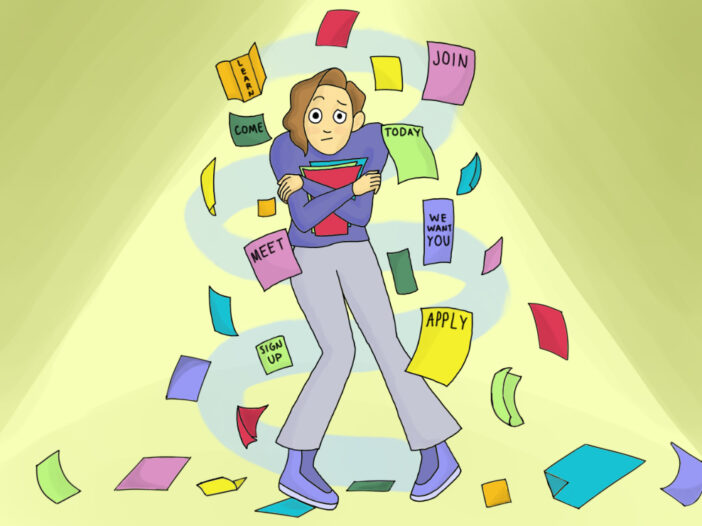 Under late-summer leaves and a light Saturday breeze, students swarmed to different fold-out tables in hopes of finding a new home. After days, even weeks, of introductions, interviews and applications, students anxiously awaited their final decisions.

For some, receiving their decision was a time of celebration. For others, it put a damper on their school year right as it began.

The academic year at Georgetown University does not begin in earnest until the semesterly Council of Advisory Boards (CAB) Fair, where student organizations across campus — from consulting clubs and student publications to gaming clubs and acapella groups — gather on Copley Lawn to promote themselves to the masses.

Held Sept. 10 this year, CAB Fair is an important time for students to discover Georgetown’s diverse array of student organizations. Yet in some cases, the fair is students’ first introduction to Georgetown’s notorious club culture.

Georgetown’s club culture has long been a contentious topic of discussion among students, and now even the administration has responded with proposed changes from the McDonough School of Business (MSB) to club structure. Stuck in the middle of these debates of fairness and organization are exasperated underclassmen like Samantha Induni (COL ’25), who wonder how they can get involved with the things they love without the fuss.

“In my experience, I have found club culture to be pretty unwelcoming and unnecessarily competitive,” Induni told The Hoya.

But tackling Georgetown’s club culture is no easy task — and there are legitimate concerns that one wrong move could crumble the delicately constructed Jenga tower that is clubs at Georgetown.

Georgetown is known for having numerous pre-professional clubs in areas like consulting, finance and tech, with rigorous application processes and traditions of exclusivity.

For instance, Georgetown Student Capital Partners (GSCP), founded in Fall of 2020, is a finance club that advises private investment funds and startups. According to its chief executive officer, Sanjay Gospodinov (MSB ’23), the club had an acceptance rate of 14%, which is an even higher rate than they plan to have in the future.

“In a normal year we would likely aim for around 6%, as we would no longer be in growth mode,” Gospodinov told The Hoya.

Another pre-professional club, Georgetown Global Consulting (GGC), is an international development-focused consulting club that provides pro-bono support to nonprofits from around the world. Its acceptance rate is confidential, but Sanjana Ranganathan (SFS ’25), director of public relations for GCC, said the club’s overall exclusivity is due to the large volume of applicants vying for a limited number of positions in the club.

“As it stands right now, our capacity is not infinite. We aren’t able to take on as many people who are interested and that’s where the application process comes in,” Ranganathan told The Hoya.

For students like Sahana Vivek (SFS ’26), who applied to numerous consulting and finance clubs, such justifications overlook the stress that the club process causes.

“The application process felt like reapplying to college, as they were very intensive and required multiple rounds of essays and interviews,” Vivek wrote to The Hoya. “Getting bombarded with that the first couple weeks of my college experience was blindsiding and overwhelming, and I felt a lot of the applications stressed hypercompetitive exclusivity with acceptance rates less than the school itself.”

Induni also expressed concerns that the student-run nature of many clubs creates the potential for personality bias during the application process.

“I have found that a lot of times, I feel like this is just the nature of student run clubs, that it can end up being based on personality as opposed to based on credentials,” Induni said. “Of course, there are going to be some people you like better, who are a friend of a friend, or have a personality you really like, and that’s going to stand out during the interview.”

Gospodinov acknowledged personal bias was a major problem for student-run clubs, noting some of his organization’s steps in countering this inequity.

“If you know a candidate and you haven’t marked ‘bias’ in our internal system, and we find out that you knew that candidate in any capacity, you will never interview again, and probably worse will happen,” Gospodinov said. “We take that very seriously.”

Nevertheless, Induni noted that she has not entirely disliked her club experience. Rather, she said pre-professional clubs pose particular problems.

“I’ve really liked the affinity spaces and clubs on campus and I’ve had a lot of friends who have been happy with sororities and fraternities on campus. The main thing I’ve been dissatisfied with is the academic and pre-professional side of clubs,” Induni said.

A welcome alternative to the pre-professional culture on campus are the numerous clubs that have no applications and few barriers to entry.

The Georgetown Bipartisan Coalition (GBC), for example, hosts roundtables that are open to anyone in the Georgetown community every other week to discuss significant political issues. Anyone who is on the email list is considered to be a member of GBC.

Tyler Van Patten (COL ’23), president of GBC, said that the openness of his club, and of its roundtables in particular, is inherent to its mission.

“It doesn’t just have to be people in the club, it can be anyone,” Van Patten told The Hoya. “We’ve had alumni before, grad students. Anybody can come, and the idea is we just talk about the issue.”

Van Patten noted that other non-application clubs, such as Georgetown University College Republicans, require individuals to attend three club events a semester to be an official member. He sees such a requirement as unnecessary for his club.

“There’s no real reason to have that distinction between who’s a member and who’s not,” Van Patten said. “We have events for the Georgetown community, so anyone who wants to attend can attend.”

Van Patten said that he is inspired to promote the openness of his club to improve the impressions for first-years entering Georgetown, for whom club culture creates a hostile environment.

“I would say the number one word to describe club culture my freshman year was ‘toxic,’” Van Patten said. “From the perspective of a new student at Georgetown, the fact that such a large percentage of clubs, and the most visible clubs on campus, require extensive applications and interviews creates a negative atmosphere, creates a sense of competition amongst students that is just unnecessary and not productive.”

Even if the club itself is open for general membership, however, Carina Medrano (SFS ’25), secretary for the Asian American Student Organization (AASA), said she appreciated the value of leadership positions that require applications and interviews.

“I think it was really cool that we do have executive boards running these clubs because that shows that clubs are student-run and student-led,” Medrano told The Hoya. “You are able to be a part of these clubs and make a difference as early as freshman year. I never thought coming into Georgetown that I’d be the freshman representative to two cultural clubs.”

Clubs like GBC and AASA are managed by the Student Advisory Commission (SAC), a student-run body with nominally strict rules on exclusivity. These rules often have not been enforced, according to Lillian Beckwith (SFS ’23), who was a commissioner for SAC in Fall 2021 and Spring 2022.

According to Beckwith, SAC has tried to be more vigilant this year in promoting club inclusivity.

“SAC has two main priorities that are derived from the university’s broader mandate: clubs can’t be duplicative and they cannot be exclusive. So, SAC tried to reinforce those rules,” Beckwith wrote to The Hoya. “There wasn’t really a mechanism for addressing current clubs that broke these rules when I was there, but new clubs were under much more scrutiny and they wouldn’t be approved if they were duplicative or exclusive.”

In response to the complaints from students and beyond, the Georgetown administration has now begun efforts to make club culture more inclusive. For example, the MSB has proposed a two-tiered system for its affiliated clubs, such as Georgetown Student Capital Partners. The first tier would retain its current application process, while the second would be open to all students.

Beckwith believes such a solution would receive mixed reviews from students.

“I am aware of the push to create a two-tiered system. I believe it’s going to be very problematic in the future, but there’s logistical issues outside of the MSB Dean’s Office that are pushing club inclusivity. The university’s broader mandate is forcing this change,” Beckwith said.

Beckwith suspects that a two-tiered system would impact the dynamic with future employers. These clubs can act as proactive recruiters, hiring only the cream of the crop.

“From the perspective of someone who works very closely with recruiters for one of the clubs I’m a part of, I’ve been able to see how they value the clubs at Georgetown,” Beckwith said. “Many of them seek out forming relationships with student clubs before the career center or in tandem with the career center because it allows them to target certain students with certain interests. I think a two-tiered structure would definitely change this dynamic.”

Gospodinov, whose club would be directly impacted by the MSB’s proposal, is pessimistic about the impact. He believes the administration doesn’t properly understand the function of pre-professional clubs.

“We’re much more like small companies than we are high school clubs,” Gospodinov said. “They think of us as high school clubs. It’s a mismatch and they’re not actually trying to listen to us and figure out a good solution.”

A university spokesperson said that deliberations are continuing between all parties.

“The proposed structure is still under development at the McDonough School of Business. This structure includes all facets of managing the student organizations within the MSB with an eye on access, inclusion, and community building. Nothing is finalized and more discussion is planned on this topic, which will include student involvement and leadership,” the spokesperson wrote to The Hoya.

Regardless of what the administration implements, Ranganathan said that GGC is trying to expand its numbers and make the club more accessible — particularly to denied members or those dismayed by the process.

“This year, we have an open consulting case workshop where anyone, regardless of how far they make it in the application process, can learn a bit about consulting and how to approach consulting case interviews,” Ranganathan said. “One way clubs could be more open is by expanding the professional development resources to a wider Georgetown audience.”

Other ideas include allowing for more duplicate clubs, as suggested by Gospodinov, particularly in popular fields for students such as consulting.

“There’s so much student appetite for consulting,” Gospodinov told The Hoya. “So even though one executive board cannot manage 200 consultants, you should allow students to create more consulting clubs than already exist.”

Ultimately, this appetite for clubs boils down to the tight bonds of friendship that they encourage. To Van Patten, this is a definite positive of Georgetown’s club culture.

“For a lot of people, their friend groups are mostly defined by their club connections. And for those people, I’m sure that they really appreciate that club culture is the way it is because if it wasn’t that way they wouldn’t have the friends that they do.”

No matter how the Georgetown community moves forward, clubs will remain a highlight of students’ experience at Georgetown — if you can ignore the process of getting there.

“The communities at Georgetown tend to be found in these clubs. I think that’s a great thing. If you’re going to find your community, why not find it around common activities that you like or a pre-professional area that you’re into? It kind of allows people to be in social environments with people who have a lot in common with them,” Gospodinov said.