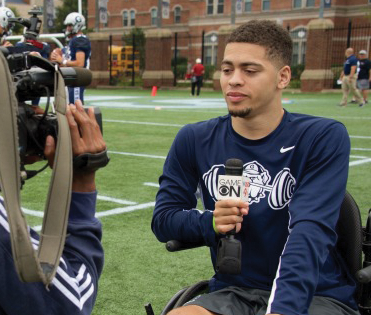 In the game of football, one step in the wrong direction or one missed tackle can change the trajectory of an entire game. For senior linebacker Ty Williams, however, what was supposed to be a simple tackle changed the trajectory of his entire life. Now, he may never walk again.

During his team’s season opener on the road at Saint Francis University in Pennsylvania on Sept. 5, 2015, Williams went in for what should have been a routine defensive play, closing in to tackle an opposing receiver right after a catch.

“It was something I’ve seen him do a thousand times,” Georgetown football’s Head Coach Rob Sgarlata said.

The force of the blow and an awkward angle combined to break five bones in Williams’ neck and vertebrae.

“You just thought something like that could never happen,” senior tight end Matthew Buckman, who is a friend of Williams’, said. “You didn’t really think how real it was until he left on the ambulance, and I think that’s when all the emotions hit.”

The course of a single play, in which Williams went low and the receiver went high, began a year-plus journey that has taken the senior from Altoona, Pa., to Atlanta, Ga., and back to Washington, D.C. — all in hopes of healing and getting back in shape.

“[His injury] was a little eerie because the whole stadium went ‘Ooh.’ It was really hard to not understand what was going on,” senior defensive lineman and Williams’ roommate Bryan Jefferson said. “I started tearing up. I was worried because he wasn’t responding to anybody.”

Williams’ injury both shocked and devastated the team, and the adjustment of trying to move past the trauma of witnessing the hit was  tough one most of his teammates. The healing process, both for Williams’ body and his teammates’ psyche, began when Williams started a rehabilitation program at the Shepherd Center, a rehabilitation center renowned for spinal cord and brain injuries in Atlanta, Ga.

Eight of Williams’ teammates visited him during the team’s bye week, seeing him in person for the first time since the hit.

“We were warned before: ‘Hey, Ty might look a little different, but he’s still the same guy,’”  Jefferson said. “When I saw him in the wheelchair, it was really hard for me, and I began to kind of tear up. … Ty was significantly smaller than he was before, and he was in a chair. Ty’s such a big and strong guy. It was tough to see him look helpless.”

Despite Williams’ tough situation and murky future at the time, he still carried the same upbeat attitude he had before, which helped calm his teammates’ frayed, scattered nerves.

“We were talking about something [at Shepherd] and he was like, ‘Hey guys, I almost died,’ just joking around, and we were like, ‘Dude, what’s the matter with you?’” Buckman said. “I think we just watched football all day, ate pizza. It was like a normal day, like a normal Sunday would have been. It’s like things never changed no matter [what was] going on.”

Williams completed his rehab program at the Shepherd Center in Atlanta in time to begin the spring semester of his junior year at Georgetown in January. Since then, he has been rehabilitating at the MedStar National Rehabilitation Hospital in D.C., hoping to one day get his body back to full strength. Williams does not have a clear long-term prognosis on his ability to walk again.

“They tell you what heals, will heal, whenever it decides to, so there’s no guarantee that I ever get [better] … I could stop healing today and that’d be it unfortunately, but fortunately that has not been the case,” Williams said.

Williams rehabs during the week at MedStar and usually lifts twice a week as well in order to try to regain some of the strength he lost, both in his upper and lower body.

“There are days that are harder than other ones. It’s not that every day is a hard day; it’s that every day, this kind of reality is forced on me,” Williams said. “This is my reality right now, and I don’t plan on that being my reality for my future.”

A No. 2 sticker decal is on every player’s helmet, and players like Jefferson — who engraved the No. 2 on his cleats as a source of motivation — have come up with other ways to honor Williams.

He remains on the active roster with the team and regularly attends team meetings, practices and games.

“We know football is going to end at some point, so you have time to work yourself to that end, but for Ty, it was taken so instantly and for him to keep going on, keep working, keep smiling and enjoying everything he’s done has given us the confidence and the courage that we will be able to do the same, and no matter what happens, we will be okay,” junior cornerback Jelani Williamson said.

Sophomore linebacker J’V’on Butler praised what Williams has done for him as both a mentor and friend. Williams was one of the first faces Butler saw on his visit to campus as a recruit. Williams then took him under his wing once he got to the Hilltop.

“I would say that he’s made me a better player, and a better person … I just always looked at him as a big brother. He made me feel like I was a better person, just knowing him,” Butler said. “He always taught me to try to be the best you can be.”

Williams’ injury, while limiting his on-field impact, has allowed his impact off the field to be even greater.

“Watching the strides he’s been making in his recovery has been incredible, so he’s a daily inspiration when you see him and talk to him and look at the things that he’s doing,” Sgarlata said. “We use the [Finnish] term ‘Sisu’, and he’s the face of it. It’s defined as courage in the face of adversity without complaint. … He just has such a great personality and outlook on things, like I said, anytime you’re having a tough day, you just go to kind of check yourself and realize what’s really important.”

For now, the journey toward a full recovery continues for Williams. Each day presents a new challenge, but also a new opportunity for him to continue to grow and be a role model to his teammates.

“I can’t wait for the day that he has a full recovery, and he’s walking around again,” Sgarlata said. “He’s really going to be a source of inspiration for people.”