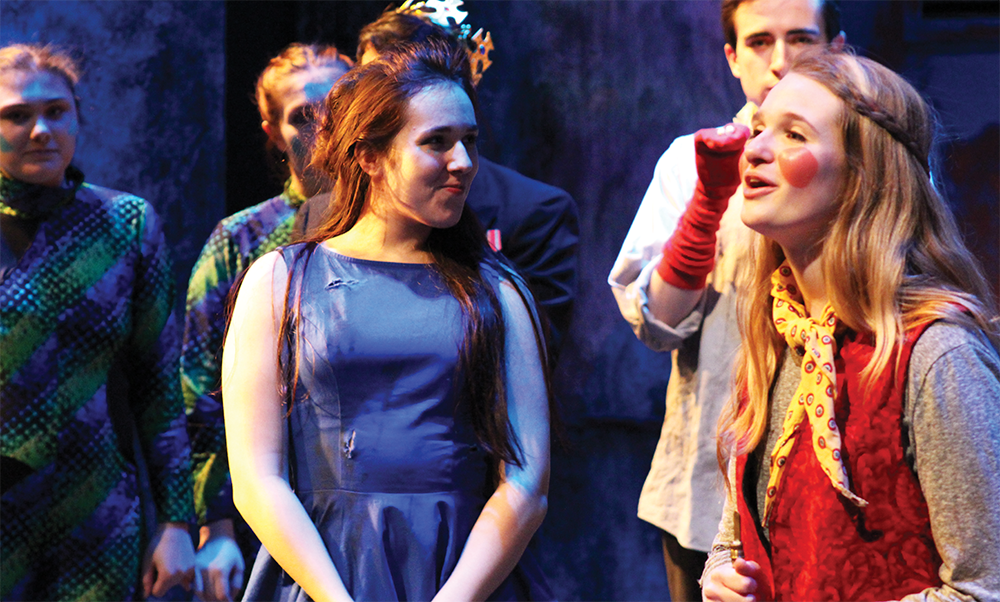 From Georgetown’s Theater and Performance Studies Program and the student-led Nomadic Theatre comes the imaginative play “The Phantom Tollbooth,” running from Jan. 26 to Feb. 4 in the Davis Performing Arts Center. Written by Susan Nanus and based on Norton Juster’s 1961 children’s novel, the story follows a young boy, Milo, on his journey into the land of wisdom, where an argument between King Azas and his brother, the Mathmagician, has led to the banishment of princesses Sweet Rhyme and Pure Reason to the land of ignorance. Afterwards, Milo, played by Carmen Livesay (COL ’17), drives his toy car through a magic tollbooth. There begins his mission to rescue the princesses.

The play is set in an abandoned post-apocalyptic subway station, where Milo takes refuge from whatever is chasing him.

“We wanted to leave it slightly abstract and not geographically rooted, because our aim isn’t necessarily to tell a specific story but more of an ambiguous everyman child’s tale,” student director Mollie Rodgers (COL ’17) said. “By having the constraints of what exists in a subway space, we developed a sort of creativity with limits, which allowed us to craft more depth into this magical world by using props such as a box or an old umbrella to thread the story.”

Even though the play describes itself as family-friendly, many of its elements may spur reflection amongst more mature audiences.

“How we formulate our own stories is paramount. To me, the story’s relevancy comes from the fact that, although this world is formulated from the perspective of the adult, everyone still creates these fantastic narratives to get through everyday life, so in some ways this relates to everyone’s stories,” John Monday (COL ’18), who plays Milo’s mission companion, Tock, said.

The upon which journey Milo embarks is one of self-discovery and learning. Using his own imagination, he attempts to make sense of the broken kingdom in which he has arrived, drawing parallels to fragmented communities that exist around the world today.

“Since the book was written around the Cold War Era, it has that theme of what happens when two different groups of people decide that they are separate and that they will never listen to each other,” Rodgers said. “My hope is for older children, college-aged students and adults to be able to tap into this additional narrative of why this child is going on this journey. How do people who are affected by the processes [that] upper-level politics set in motion react to deal with these conflicts? What does a child do when there is no rhyme and reason in their life?”

One of the play’s most remarkable aspects lies in its gender-neutral casting. Open auditions for all roles ensured that gender did not constrain performers of great talent from landing a specific part. Livesay plays Milo, an originally male character.

“We wanted to open the casting opportunities to everyone. From our perspective, this character had to be a child and not necessarily a male character. We wanted to let the best actor win the role,” Rodgers said. “Carmen walks a really great line between playing a child and not creating a caricature from it.

Children are usually superficially portrayed as running around in high-pitched voices without knowing anything about what is happening around them. She brings a real life and sensitivity to Milo.”

The collaboration between Georgetown’s theater department and a student-run organization like Nomadic Theater translates well into the play’s unique dynamic. This partnership created an incredible mixture of institutional efficiency and fresh perspectives that have enriched the final product.

“It’s been a very rewarding and incredibly useful learning experience, because we are working in conjunction with professionals,” producer Bailey Premeaux (COL ’19) said. “With such a vast support system, we were all able to make the show better. We certainly learned a lot and can take that and roll that into next productions.”

Through a talented design team, which includes professional set designer Patrick Lord, the play manages to convey both playfulness and thoughtfulness through shifting lights and powerful sounds. The narrative ties the audience to displaced children all around the world, who cope with painful realities they do not fully understand.

“There are two layers to the play. The first is the reality where only Milo exists, and the upper one is the imaginative world. Younger children will get cued into the imaginative world through the play’s swirling colors or the funny hats characters wear,” Rodgers said. “A lot of the objects are transformed from this realistic level into the imagination layer. The realistic portion relates to the world we live in right know, where a lot of children in certain places are being forced to deal with very adult themes that they haven’t created but by which they are burdened.”

The production’s well-crafted characters and enthralling story is bound to allure both children and adults. There is plenty for any age group to discover as they embark on this journey with Milo.

“We want children to come see it, but we also want to have an adult audience to appreciate the nuances of a play that speaks of very relevant subjects for both groups,” Premeaux said.

By the time Milo reaches the conclusion of the play, his attitude towards learning and life is forever transformed — members of the audience may find that they, too, have learned a little something.

“The Phantom Tollbooth” is showing until Feb. 4th in Davis Performing Arts Center’s Devine Studio Theatre. Tickets are $12 for general admission and $8 for students. To order, visit performingarts.georgetown.edu or call 202-687-ARTS (2787) Monday through Friday, 3-6 p.m.