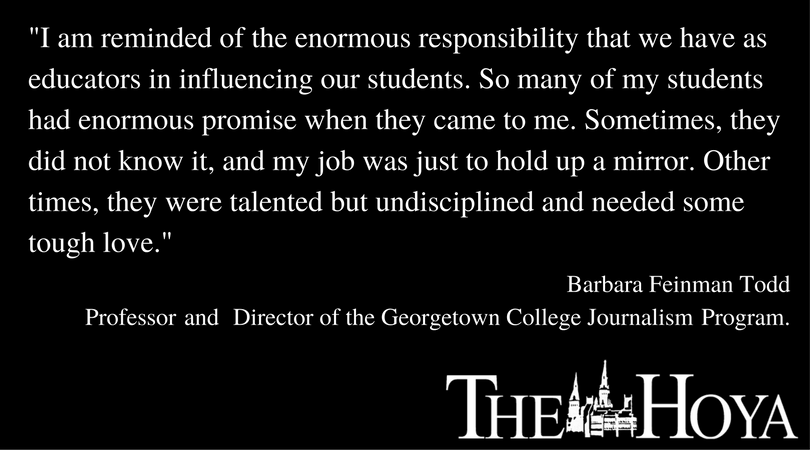 I’m leaving the Hilltop after 25 years.

Typing that sentence is at once both painful and exhilarating. Leaving a place that has been so good to you is hard, but it’s important to always be pushing yourself to try new things. That’s what I tell my students — and now, I must take my own advice.

Though our country is a divisive mess right now and it can be tough scrolling through Twitter some days without sinking into despair, one thing keeps me going: knowing there is an army of former students out there developing sources, gathering facts and filing solid, ethical stories.

They are at all the major networks, the best newspapers, magazines, blogs and social media companies. You name it, and there is a Hoya there.

Over the years, I’ve talked dozens of students out of going to law school and into pursuing their journalism dreams. Many of them have thanked me for it, years and even decades later. Each time I hear from one of them, I am reminded of the often humbling responsibility that we have as educators in influencing our students. So many of my students had enormous promise when they came to me. Sometimes, they did not know it, and my job was just to hold up a mirror. Other times, they were talented but undisciplined and needed some tough love.

I have always insisted that students attend class, not because I think that what I have to say is so important – it is, though, plus, do you really need to sleep in till noon? – but because showing up is what journalism is about. And because making deadlines matters. Excuses don’t work in a newsroom, so I felt that they did not belong in a classroom either. I tried to get my students to function even when they had personal problems. Life is tough, and bad things happen, but stories still need to be finished: I have always believed my job was to make sure that my students would be prepared to do theirs.

Before I go, I want to acknowledge the many amazing opportunities that this university has given me and to express my gratitude to the College deans, a group of people who are so committed to the students and faculty. The example of their service is an inspiration to faculty members like me. With their support, I was able to found the undergraduate journalism program in the College, which filled a curricular hole and provided students interested in journalism with an academic home.

I also got to found the graduate journalism program in the School of Continuing Studies, where I co-directed the Pearl Project, an investigative reporting seminar that turned into an award-winning, three year-long deep dive into the kidnapping and murder of Wall Street Journal reporter Daniel Pearl. I also co-taught a class called “How to Read a Newspaper” with my personal hero, legendary Watergate editor Ben Bradlee.

For the last four fall semesters, I have had too much fun co-teaching a course with my colleague and dear friend Maureen Corrigan. In “Washington Confidential,” we have explored, through literature and journalism, the many different ways to read this complicated city.

Fueled by the passion and energy of my students, our undergraduate program organized an ongoing campaign to bring attention to Georgetown alumnus Austin Tice, a journalist who was captured in Syria and remains there to this day, more than five years later. Every day, I wake up hoping today will be the day that he is returned safe and sound to his family.

All of these endeavors have been a privilege and an honor, and they are memories I will cherish. But what means more to me than anything is reading a newspaper or magazine and spotting a familiar byline; or turning on the television and seeing a familiar face; or listening to the radio and hearing a familiar voice and associating this recognition with a memory of a classroom discussion, a meeting during office hours or a quick chat at Saxby’s.

“I thought you would like to know and take a measure of pride in it,” he wrote.

For a journalism professor, it doesn’t get much better.

Barbara Feinman Todd is a professor in the Department of English and serves as the director of the Georgetown College Journalism program.