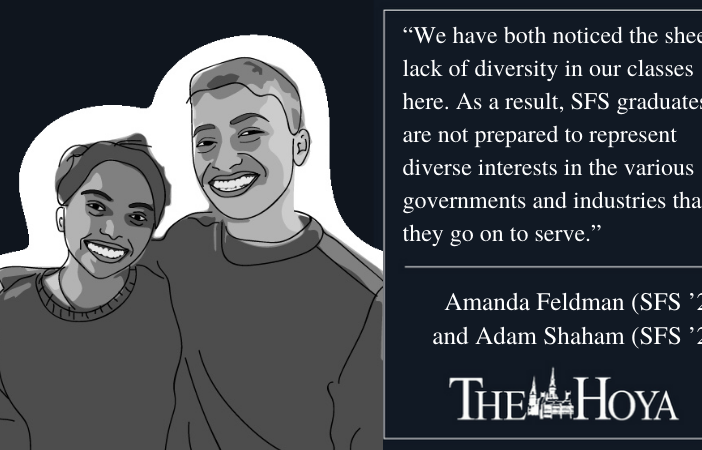 Attending Georgetown University has been a privilege. The faculty, the programs, even the students are all world-class. But something is off about campus. Georgetown is really white, especially the School of Foreign Service.

We are writing this column together as SFS students, and we are both members of diversity groups on campus. Though we wrote this installment together, anything written in the first person speaks specifically to Amanda’s experiences as a student of color.

We have both noticed the sheer lack of diversity in our classes here. As a result, SFS graduates are not prepared to represent diverse interests in the various governments and industries that they go on to serve. As the number one feeder school to the U.S. Foreign Service, the SFS plays a direct role in shaping leadership in international relations. Improving diversity on campus is therefore imperative.

Despite how white our campus feels, Georgetown has consistently ranked among the top universities in terms of diversity. According to Money, Georgetown ranked 13th in the country for providing best value to African American students, as of 2016. This ranking compliments years of Georgetown’s inclusion on Black Enterprise’s list as well, which assesses the “social and academic” environments for black students on campus. In 2008, Georgetown ranked fifth on the list and was only beaten out by historically black institutions. While both of these accolades show that Black students can have valuable experiences on campus, they do not make up for the fact that Georgetown classes still fail to represent the racial or socioeconomic demographics of the U.S. population.

Twelve percent of students admitted to the Class of 2022 were Black, another 12% were Hispanic and 19% were Asian. These statistics are somewhat reflective of the American population, of which 13.4% is Black, 18.3% are Hispanic and 5.9% are Asian. Despite these promising statistics, the percentages of Black, Hispanic and Asian students from the United States attending Georgetown are each around 8%. Students of color are being admitted, but they are choosing not to come to Georgetown. Georgetown has an obligation to actively work to combat this trend.

Despite the success of the universitywide Georgetown Scholarship Program and the Community Scholars Program to bring more minority low-income, first-generation students to campus, more must be done. Solutions to this issue will require reducing barriers that have historically disadvantaged students of color and will require the university to substantially reform its admissions and recruiting process. Legacy applicants to Georgetown are twice as likely to be accepted than their similarly qualified peers. Yet legacy admissions are widely proven to disproportionately favor wealthy, white applicants over qualified students of color. Georgetown should end legacy considerations in its admissions process to make the process more equitable.

The university’s admissions office should also reform its standardized test requirements. Georgetown is nearly alone among peer institutions in strongly encouraging applicants to submit three SAT subject tests. Harvard University researchers have shown that these kinds of standardized tests are coded with racial biases that systematically disadvantage Black students. Moreover, even college admissions counselors acknowledge that research overwhelmingly indicates that SAT subject tests are primarily indicators of wealth, not intelligence. Georgetown should follow the lead of the one in four American universities that have already become test-optional and have seen positive increases in the enrollment of students of color.

At the beginning of the term, we sat with SFS Dean Joel Hellman to raise our concerns. Hellman acknowledged the school’s struggle with attracting and retaining students of color, yet also highlighted notable strengths in the SFS’ student body. The SFS has the highest socioeconomic and geographic diversity of any of the four undergraduate schools. Recent initiatives like the “Diverse Diplomacy” speaker series and a Black SFS graduates panel are laudable efforts to highlight role models of color in the working world. Hellman stressed that increasing the SFS’ racial diversity has long been a priority for him and the school’s administrators, who have actively worked alongside the Office of Admissions to address the gap.

Yet if the SFS is truly dedicated to preparing students to become global leaders in a 21st-century foreign service and world, more must be done. Increasing the share of Black and Hispanic students must be a priority. It is imperative that our classrooms look like the country we are being trained to serve.