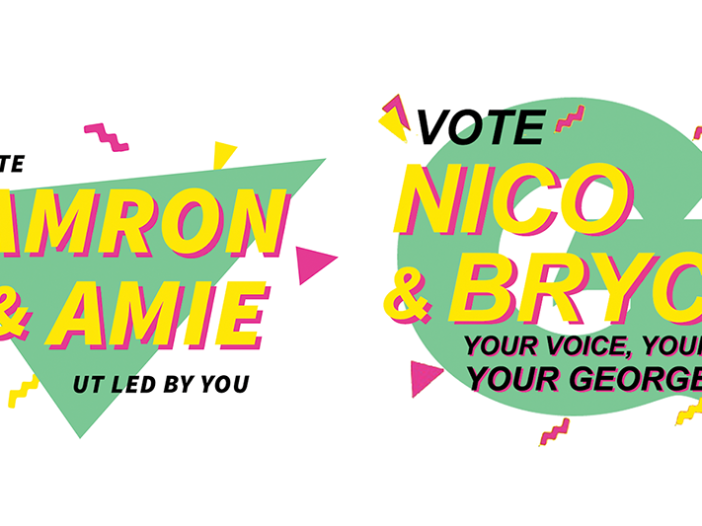 Camron Goodman and Amie Jean, the UTSG president and vice president for 2019-20, ran in February 2019 with the slogan “UT led by you” and a campaign featuring bold, ’90s-inspired graphics. The designs are originally by Sarang Kim, a recent graduate from UT’s advertising and studio art programs.

Ferretti and Badger’s GUSA campaign this January employed nearly identical graphics, a detail Badger acknowledges was directly inspired by Goodman and Jean’s campaign at UT, although he maintains the designs were not explicitly plagiarism.

“We were conscious of the fact of how similar the two are,” Badger said in an interview with The Hoya. “We liked how non-traditional this was and how out of the box it was.”

Badger personally created the designs for his and Ferretti’s campaign using Adobe Photoshop and Canva. After Badger and Ferretti decided to run for GUSA Executive, they researched student government campaigns at universities across the country. The design of Goodman and Jean’s campaign stood out to them, Badger said.

The credit, which reads “Design Inspiration: Camron & Amie,” should have included a link to the campaign or attributed direct credit to the design, Jacqui Briddell, the communications director for Goodman and Jean’s campaign, said in an interview with The Hoya.

“They credited us on their website, but they just said ‘inspired by Camron and Amie,’ but they didn’t link to our campaign. They didn’t say ‘at the University of Texas,’ so there’s no way for people to know where it came from,” Briddell said. “It would’ve been nice for them to reach out and ask us.”

Kim and Briddell credit much of Goodman and Jean’s campaign’s success to its cohesive graphics and visual elements.

“We just really focused on having something that was approachable, personable,” Kim said in an interview with The Hoya. “I think that’s how you attract people with the same mission, same vision, same values.”

When a friend showed Briddell the social media accounts for Ferretti and Badger’s GUSA campaign, she was shocked by the similarities to the UTSG campaign she had worked on the year prior. She tweeted screenshots of Goodman and Jean’s graphics alongside Ferretti and Badger’s, and the tweet received dozens of retweets and over 200 likes.

Following her initial frustration, Briddell now describes Ferretti and Badger’s use of many of the same design elements as flattering.

“Me saying everything I said wasn’t coming from a place of malice,” Briddell said. “It’s actually really cool to see that our campaign, our brand identity and the way we kind of executed things from a communications standpoint really inspired them.”

“People aren’t necessarily paying attention to where content was birthed or where it came from,” Briddell said. “It just isn’t who you are. It doesn’t truly represent who you are as a person, as a candidate, as whatever, if you’re using something that you didn’t create.”

“I’m sorry that we didn’t reach out to them in advance,” Badger said. “I think they really set a high bar for what campaigns should look like across the nation, and I really applaud them for everything they did throughout their campaign and throughout their term.”