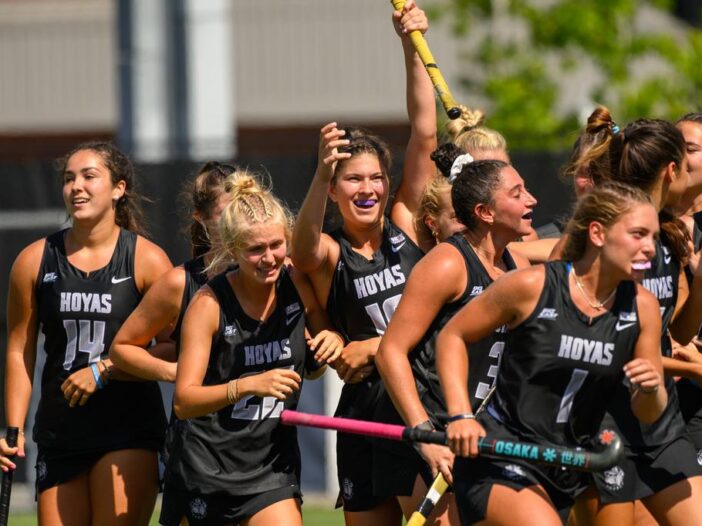 The Georgetown women’s field hockey team cruised past the Queens University of Charlotte Royals, capping a dominant second half for a 9-1 victory.

The Hoyas (2-2) controlled possession for the first three minutes of the game, keeping the ball out of reach of the Royals (0-3), who made the jump from Division II to Division I at the start of this season. The scoring started in the 11th minute, as first-year attacker Lindsay Devine was able to hammer it home past the Royals’ goalkeeper for her first goal of the season and first of two on the day.

Queens did not stay off the scoreboard for long, however, as it ramped up its attack, earning 3 consecutive penalty corners in a row. On one penalty corner, the Royals had a chance to level the score, but their effort was denied by Hoya fifth-year goalkeeper Ciara Weets.

Queens finally got off the mark on their fourth penalty corner of the opening period as Royals midfielder Cassie McKenzie tied the game 1-1 in the 15th minute with what proved to be the visitors’ only goal of the game.

The Royals’ momentum was quickly reversed as the Hoyas responded with a goal of their own just 20 seconds later. With nine seconds left in the opening period, junior midfielder Skyler Lesslie was able to deflect a tremendous push from junior forward Vivienne Trumpbour to put Georgetown up 2-1.

Both teams battled for control in the second period, as the Hoyas continued to pressure the Royals goal while conceding just 1 penalty corner on defense. The only goal of the quarter came as sophomore midfielder Sophie Towne intercepted a push-pass, and rifled a shot past the left leg of the Royals goalie to cushion the Hoyas’ lead heading into the halftime break.

The Hoyas ran away with the game in the third quarter, finding another gear that the Royals were never able to match.

Georgetown’s front line relentlessly threatened the Royals’ goal, notching 11 shots to the Royals’ none. The Hoyas coupled their increased intensity on the offensive end with more focus and discipline on defense. They did not concede a single penalty corner in the second half. Queens could not handle Georgetown’s tireless attack as the Hoyas kept it in the Royals’ defensive third of the field for the majority of the second half.

The third quarter was the Hoyas’ most prolific of the game as they racked up 4 unanswered goals. Sophomore attacker Emma Van Der Veen scored twice while junior midfielder Eliana Swell and Trumpbour recorded scores of their own to put the hosts up 7-1 heading into the fourth period.

In the final quarter, the Hoyas showed no signs of slowing down. After repelling 3 Royals shots throughout the first three quarters, reigning Big East Defensive Player of the Year Weets was swapped out for senior goalkeeper Megan Maynes, who managed a clean sheet in the fourth quarter. The game ended as it started with the Hoyas’ Lesslie and Devine each netting their second goals of the day, cementing them as the joint-top offensive performers along with Van Der Veen, who had 2 goals of her own.

To go with the strong win, two Hoyas were named to the Big East Honor Roll on Tuesday, Sept. 6. Van Der Deen got the nod for terrific play against Queens and Sacred Heart University. After taking just 23 shots her entire first year, she looks to have made the sophomore leap, having taken 15 shots in just four games this season.

Junior back/midfielder Katharine Glassmeyer shared the honor; her durability has been huge for the Hoyas.

The Hoyas will travel to Pennsylvania to play the Lock Haven Eagles (3-0) on Sept. 9 at 3 p.m. as they look to earn their first road win of the season and build on their defensive improvements before Big East play begins later this month.