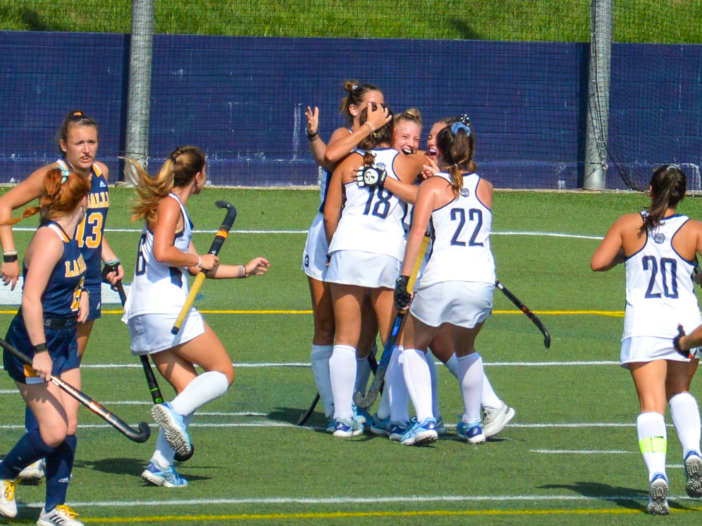 Georgetown women’s field hockey continued its rebound from a slow start to the season and notched their third consecutive victory as they gained a 3-1 win over the La Salle University Explorers on Sunday, Oct. 3.

In a scoreless first quarter, fifth-year midfielder Ali Cronin took five penalty corners for the Hoyas. Cronin brought the ball to the top of the circle where a forward was ready to drive it in. Late in the first quarter, the Hoyas shot a corner that went just shy of the left corner of the cage. The rebound caused La Salle to gain control and carry the ball up the field, crossing the ball into the middle of the circle, but the Georgetown defense stayed united to protect its goalkeeper and sweep the ball out of the middle.

Georgetown came out strong in the second quarter. The ball was quickly carried up the field and dished off to sophomore midfielder Vivienne Trumpbour, who tried for a one-on-one opportunity with the goalie and two defenders on her back. She was unable to get the shot off, but first-year attacker Emma Van Der Veen broke away from her defender and gained control of the rebound ball. Van Der Veen drove the ball past La Salle goalkeeper Ryan Curley into the right corner of the cage. The Hoyas celebrated the first goal of the day and Van Der Veen’s second goal of the season.

Riding off the first goal, the Hoyas moved the ball with swift, crisp passes. They kept the energy up as they tried to knock in another goal before the first half ended, but they were unable to convert.

The Hoyas started with control of the ball to start the second half. They were persistent to get another goal off with the five penalty corners. Georgetown tried out a new corner to shake things up. They faked a drive at the top, passed right and backed down to Cronin, who tried to lift the ball into the cage. The play was executed beautifully, but the shot went slightly left of the net.

Trumpbour, on the left forward line, was determined to set her teammates up for a goal. She made space in the middle and dished the ball into the center of the goal circle for a teammate to run onto. Though no one was able to capitalize, Trumpbour continued sending the ball into the middle.

In the third quarter, the Explorers sought to respond and knot up the score. La Salle’s offense powered the ball downfield and tried to slam it in, but Georgetown’s senior goalkeeper Ciara Weets blocked the ball. But, as the offense and defense started to pile in for the rebound, La Salle forward Hannah Yanovich found the back of the cage in a scrap battle at the foot of the goal.

With the score now 1-1, the Hoyas’ defense led a field transfer, bringing the ball from the right side of the field to the left. This created space for the offense to run onto the ball. Trumpbour brought her defender out wide and went inside to send one of her famous passes to the center of the circle. Towne tipped the ball high into the top left corner away from the goalie and scored to regain the lead for the Hoyas.

With six minutes left, Trumpbour broke away from her defender and sprinted down the right side of the field. She found Van Der Veen in the middle and sent a sweep to the top of the circle. Van Der Veen wound up and sent the ball slamming past Curley into the back of the cage for her second score of the afternoon, which would prove to ice the 3-1 victory for Georgetown.

The Hoyas, fresh off their third consecutive victory, will have a short break before heading to Norfolk, Va. to face No. 19 Old Dominion (8-2, 2-1 Big East) on Friday, Oct. 8 as a part of a two-game Virginia road trip. Georgetown will then play Virginia Commonwealth University (7-3, 3-1 Atlantic 10) on Sunday, Oct. 10, hoping to return home with their win streak extended to five.