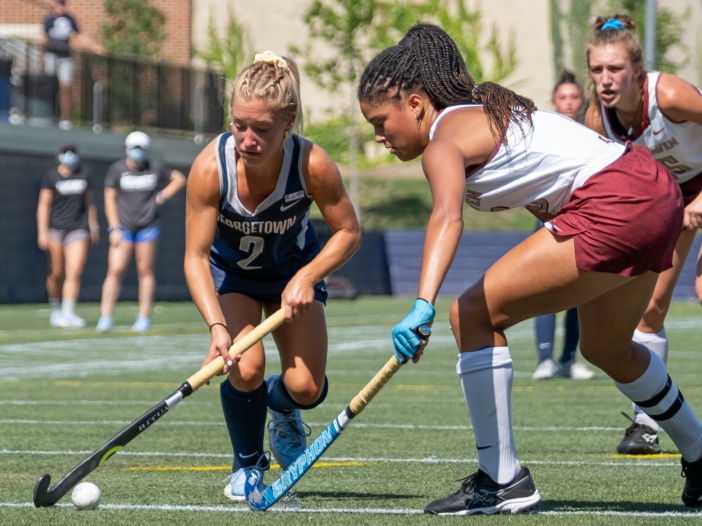 The stands of Cooper Field were packed on Sept. 19 as the Hoyas (3-4, 0-1 Big East) faced off the Bald Eagles (1-4, 0-1 A-10). The Hoyas set the tone early in the match as they outshot Lock Haven 3-1 in the first half of the game. In a display of strong leadership, fifth-year midfielder Ali Cronin used her swift defensive skills to keep the ball away from the Bald Eagles and out of the Hoyas defensive zone.

The Hoyas were relentless in their efforts to find the back of the cage. Georgetown dominated in penalty corners with a tally of 14, and shots taken on most. Conversely, the Bald Eagles notched five corners with hardly any shots on the cage.

On each corner, Cronin sent a crisp insert to senior midfielder Isabel Harkins, who used her strong drive to wind up before each corner and attempt to place a shot in. Although none were successful, all shots were close to finding their way to the back of the net.

The score was still 0-0 at the start of the second half, but Georgetown dominated possession to kick off the half. Freshman attacker Sophie Towne shrugged off her defender and broke off with the ball as she stared down the goalie. The Lock Haven keeper, junior Mariana Birdthistle, ran out and blocked Towne from getting a shot off. At this point, the Hoyas were dominant and anxious to put away a goal, as the ball never left the Bald Eagles’ defensive side.

Suddenly, the Hoya’s offense exploded and shots were fired one after the other in the fourth quarter. Georgetown put 11 shots on the board and Lock Haven was not able to get off any in the final period. As the fourth quarter came to an end, Georgetown had taken 16 shots on net to Lock Haven’s one. But without any of either team’s attempts seeing the back of the net, regulation ended scoreless, and the game moved into overtime with a score of 0-0.

As overtime kicked off, the energy was high amid the buzzer and roaring fans. Both teams were given 15 minutes to score in this one-goal-wins overtime. With the game becoming seven-on-seven, as opposed to the standard 11, the field opened up. In a back-and-forth duel, the Hoyas and Bald Eagles each had three penalty corner attempts. Despite attempting seven shots, the Hoyas were unable to find the back of the cage.

With no time to spare, Cronin took a strong shot on goal that ricocheted off Lock Haven’s keeper. The ball found its way to fifth-year attacker Emma Street, who took control of the ball. Street drove the ball towards the left side of the goal away from Lock Haven’s keeper. The ball slammed into the back of the net as Street scored the golden goal. The team immediately rejoiced into celebration, and players rushed the field.

This week, the Hoyas are on the road again for two more away games up in Providence, Rhode Island. They will take on the Providence College Friars (4-4, 0-1 Big East) Friday, Sept. 24, and the Brown University Bears (3-3, 0-0 Ivy League) Sunday, Sept. 26.