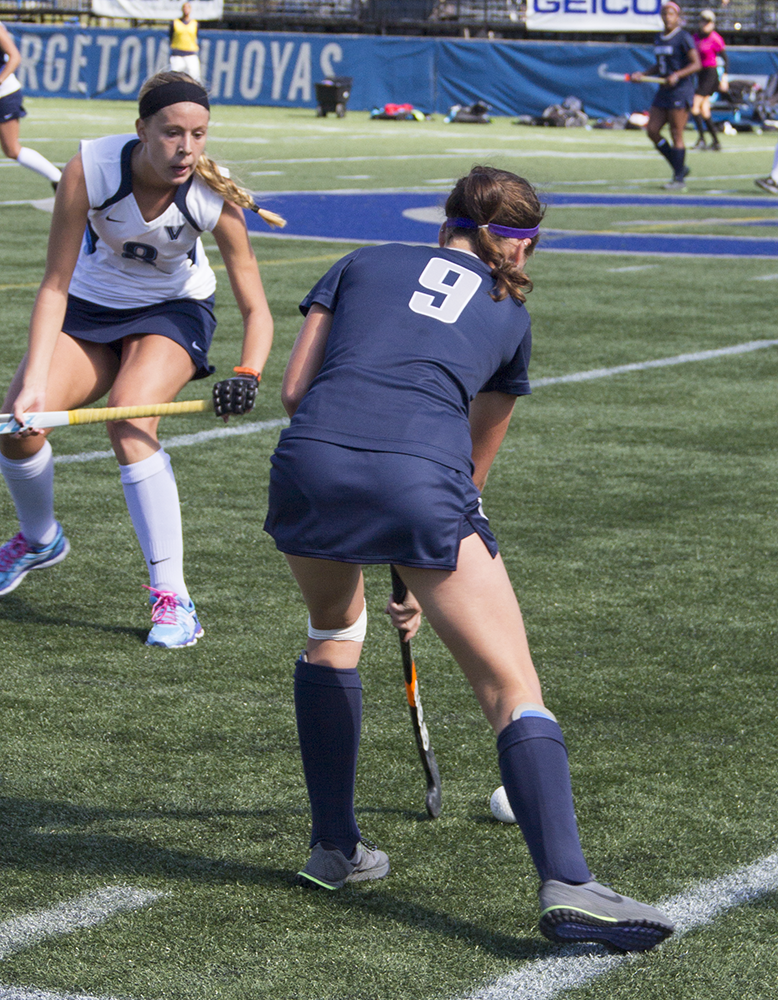 Against the Huskies, the Hoyas struggled to generate offense, spending most of the game on defense.
“We felt like our press was good; we just shot ourselves in the foot a couple of times in terms of being able to possess the ball and defend our circle from a goalkeeper’s standpoint. Early in the game we made some unforced errors that hurt us early on,” Head Coach Shannon Soares said.

UConn’s offense took advantage of those defensive mistakes, scoring four times in the first half. Senior midfielder Roisin Upton scored twice in less than four minutes to make it 4-0 before the 30th minute.

Huskies sophomore forward Charlotte Veitner, who is a favorite to win Big East Offensive Player of the Year, finished the game with a total of four goals, including a natural hat trick, in an eight-minute span.

Despite the score, Soares was still impressed with the effort that her team displayed.

“I thought we actually competed against them at a higher level. … When you don’t look at the score, I was pleased with the effort that we put forth in the match against the No. 2 team in the country,” Soares said.

The game against UConn was an emotional one because it was Georgetown’s Senior Day. Soares and junior goalkeeper Rachel Skonecki both had difficulty describing how impactful and meaningful the senior class has been to the program.

“It is hard to put into words how special this senior class has been for our program, especially over the course of the last two years since I’ve been here. They have been a group of five young women who have bought in very quickly to what we’ve been trying to do as a staff and have led the way in terms of this new culture,” Soares said.

“It’s impossible to describe how much they mean to the team. Each and every single one of them brings something special. It’s impossible to replace each of them. They mean more to this group than anyone can express. They were the first group to turn this program around from where we were a few years ago. And they never looked back, never stopped trying. They’ve been more impactful than anything else in the program,” Skonecki said.

The Hoyas weren’t able to win their final home game of the season for their seniors, falling to the William and Mary Tribe 3-1.

Freshman midfielder Sam Hickey started the game’s scoring, netting the Hoyas’ only goal. However, William and Mary’s offense was able to quickly break down Georgetown’s defense, scoring twice before the end of the first half.

The Tribe added one more to make it 3-1, and its defense never let the Hoyas back in the game.

Even though Georgetown ended the season on a four-game losing streak, it still saw signs of improvement from last year, finishing with two more wins than last year’s total. Soares attributes this success to the hard work and determination of this year’s team.

“As a new staff we’ve been in this for 20 months and … to go from a record that was 2-16 before we started this thing to 6-12 last year to 8-11 this year just shows you the strides we are making as a program that would never be possible without the hard work and commitment and internal leadership from the group of 21 young women that comprise our team,” Soares said.

Both Skonecki and Soares realize that their work is far from finished, and the team still has something to prove to the Big East next year.

“We have to stop making mistakes that are fixable. When we control our games we play well. … [We must] continue to follow the plan and just chip away at people who may write us off,” Skonecki said.

“We have a lot of work ahead of us and have ways to go in terms of the progress we want to make over the course of the next 365 days, and that work starts now,” Soares said.