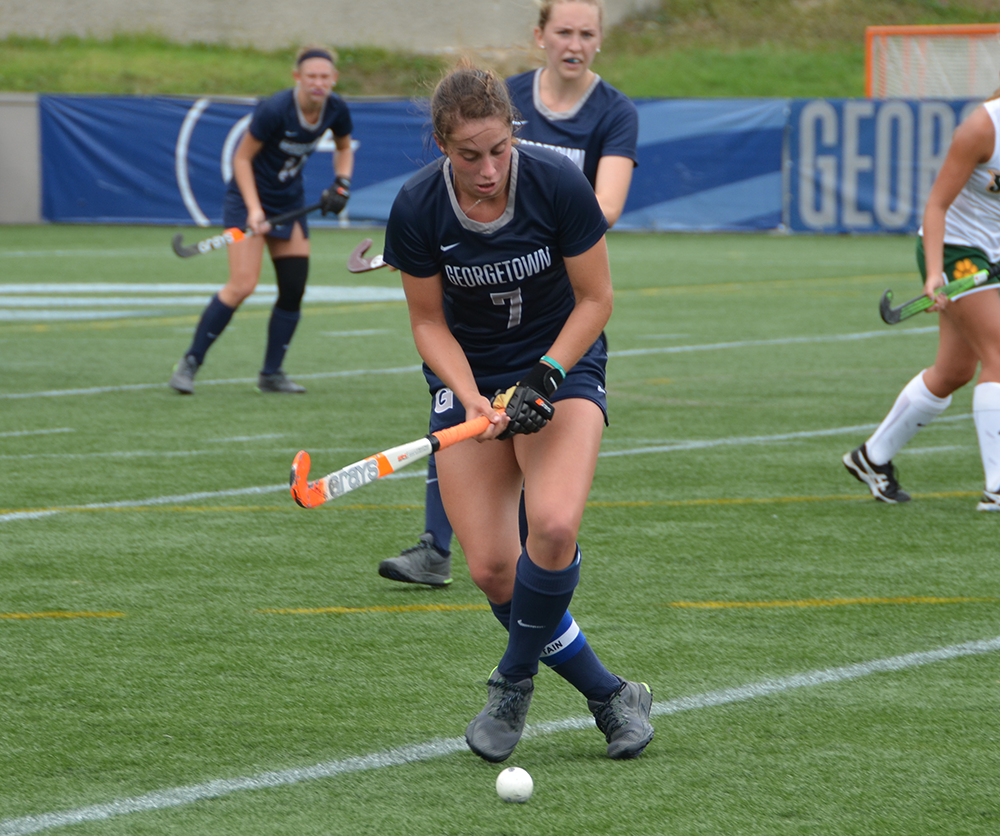 Georgetown successfully bounced back from a disappointing overtime loss to Towson (2-8, 0-0 CAA) by defeating Siena two days later on the Hoyas’ home turf. The Hoyas sharpened their defense, holding the Saints without a shot and giving junior goalkeeper Rachel Skonecki her fourth shutout of the young season.

The Hoyas’ offense also had an impressive outing against the Saints; they recorded an 8-0 advantage in shots, with senior midfielder Emily Weinberg leading the way with two shots. Weinberg cited her team’s desire and home-field pride as driving factors behind the Hoyas’ fifth win of the season.

Opening up conference play against a Friars team that so far has only one win provides the Hoyas with great opportunities. If Georgetown can beat Providence, the Hoyas will only need one more win to clinch a spot in the Big East tournament. Weinberg credits the team’s new and improved culture with making the difference this season.

“What’s working well is having a fighter, hard-working mentality, always keeping our culture up. We maintain the fact that we’re a family [and are] always working hard for each other,” Weinberg said.

The Friars are currently on a three-game losing streak. Providence’s lone win this season came against Brown, and its most recent game was a 4-2 loss to Fairfield (4-4, 0-0 MAAC). Freshman midfielder Emma Lucas and junior forward Adrienne Houle lead the Friars with three goals apiece. Georgetown’s aggressive defense will look to contain these offensive threats and dismantle an offense that has already been shut out three times this season.

Graduate school goalkeeper Deidra Clymer and sophomore goalkeeper Megan Guilbert have been splitting starts this season, sporting save percentages of .638 and .722, respectively.

Although the matchup with Brown is not a conference game, it still carries importance as it could allow Georgetown to gain momentum as it heads into the second half of the season.

Senior forward Hannah Rogers carries the Bears’ offense. She is tied for the team lead in goals with junior defender Katarina Angus, who has shown that she is not only a defensive centerpiece, but also an offensive threat.

Freshman goalkeeper Katie Hammaker will most likely get the start Sunday. Hammaker has recorded a solid save percentage of .718 and has three wins under her belt. A Georgetown offense that only averages 1.22 goals per game will have to shine and take advantage of vulnerable defenses in both games this weekend. Both the Friars’ and the Bears’ defenses concede an average of 2.5 goals per game, while the Hoyas’ defense allows only 1.11 per game.

“For offense, we’re really just trying to focus on being very, very hungry in our attacking circle, getting a lot of goals, getting a lot of shots on goal,” Weinberg said. After winning six games in the 2014 season, the Hoyas have already won five games so far this season, with 10 regular season games on the schedule. According to Weinberg, the team still has room for improvement, but is on an upward trajectory.
The game against Providence is scheduled for Friday at 5 p.m.