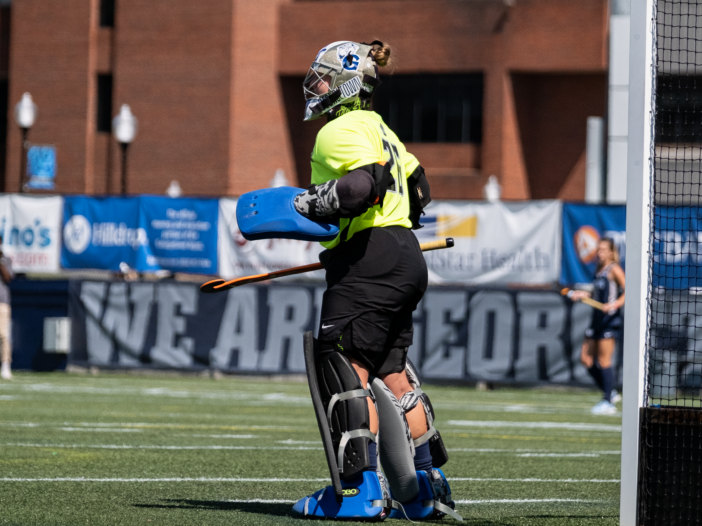 Georgetown women’s field hockey capped off its season with a 3-1 win over the Richmond University Spiders, clinching its first winning season since 2018 and its second in the past 19 years.

Last week, Georgetown appeared to be on the verge of making the Big East playoffs for the first time in program history but was knocked out of contention following Temple University’s defeat of the University of Connecticut on Friday, Oct. 29. Regardless, the Hoyas (10-8, 3-4 Big East) seemed determined to finish their impressive season with a win over the Spiders (5-13, 4-3 Atlantic 10).

The team’s final match of the year on Sunday, Oct. 31 featured a special Senior Day celebration for the seniors and graduate students on the team. Georgetown honored its seven departing players in a pregame ceremony.

In the first quarter, Georgetown started off with strong possession, keeping the play mostly in Richmond’s defensive third of the field. The Hoyas had four shots on goal but could not finish with a score until just about two minutes left in the quarter. Off a corner taken by fifth-year midfielder Ali Cronin, junior midfielder Abby English passed the ball to fifth-year attacker Emma Street. Street’s shot ricocheted off a defender, putting the ball in the back of the cage.

The Spiders came charging down the field on a fast break three minutes into the second quarter to tie the game. The shot was initially snuffed out by senior goalkeeper Ciara Weets, but Weets was unable to keep control of the ball after the save. Richmond midfielder Lindsey Frank tapped the ball in to score off the rebound.

Georgetown remained undeterred, and just two minutes later earned a corner that led to another goal. Cronin again passed her corner to English, who set up senior midfielder Sydney Stephenson for the shot. Although the ball bounced around, senior attacker Halle Gill was there to redirect the ball past the goalkeeper, putting the Hoyas up 2-1 at halftime.

In the fourth quarter, another corner for the Hoyas gave them a chance to further increase their lead. With around eight minutes left, Cronin took the corner and passed the ball along to Stephenson, who immediately took a shot that bounced off a defender and into the goal. Up 3-1, the Hoyas put on an impressive defensive stand for the rest of the game, altogether stopping six shots in the last 15 minutes of play.

This final win over Richmond helped contribute to the senior class’s already impressive accomplishments, as Cronin’s two assists helped boost her to the third-highest all-time leader in assists for the team. In addition, Weets’s six saves brought her total for the season up to 111 saves, giving her the best save percentage in the Big East. Stephenson’s goal and assist added to her team-leading 15 points for the season.

Georgetown Head Coach Christy Longacre said the win over Richmond was one of the team’s most impressive performances of the season and allows the team to head into the offseason on a positive note.

“I thought this was one of the best games we’ve played all season,” Longacre said in a postgame interview with The Hoya. “They came out with great energy and it was a special day to celebrate the seniors and all they’ve done for the past four years.”

Looking back at the season as a whole, Longacre said she was disappointed the team’s seniors would not get to experience the Big East tournament, but she was proud of their hard work.

“The seniors are definitely going to be missed,” Longacre said. “Everyone counted us out because we hadn’t been able to practice, but how quickly they became a threat and a great team in just three months has been an incredible journey.”

After playing her last game for Georgetown, Gill said she felt a mix of emotions about leaving such a special team.

“The biggest thing I’m feeling right now is gratitude,” Gill said in a postgame interview with The Hoya. “Not being able to play reinvigorated our love and passion for the game and for each other, and we really tried to take advantage of every second together when we came back.”