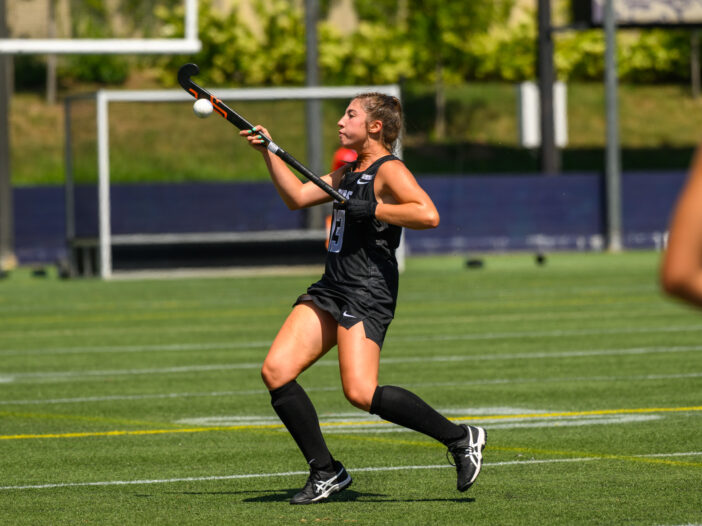 The Georgetown University field hockey team suffered a heartbreaking loss to the visiting Long Island University (LIU) Sharks. Following a close score for most of the game, Sharks midfielder Emilce Paez scored with just 15 seconds remaining to lift LIU to a 2-1 victory.

The two sides met at Cooper Field on Sept. 18 during a bright afternoon with turf temperatures in the mid-80s. A season-high 407 attendees gathered to watch the Hoyas take on the Sharks, nearly double the number who saw Georgetown’s last home contest, a 9-1 blowout win over Queens University of Charlotte (0-6).

After the game, Georgetown Head Coach Christy Longacre spoke with The Hoya about some positive takeaways from the Hoyas’ defeat against the Liberty Flames, particularly Georgetown’s tight play in the first quarter. Her squad looked to replicate the feat against LIU.

Unfortunately for the Hoyas, Georgetown was not the only team on Sunday with a quick start on their minds. From the opening whistle, the Sharks pushed the ball aggressively upfield and were rewarded for their efforts with 3 consecutive penalty corners. After the Hoyas stifled the first two chances, LIU forward Meilin Liotard maneuvered the ball to the center of the shooting circle and fired a shot off of the shin of fifth-year Georgetown goalkeeper Ciara Weets. Paez received the ricochet and redirected it into the bottom left-hand corner of the goal to give the Sharks a 1-0 advantage just six minutes into the game.

However, the Hoya defense rebounded with a gritty second quarter. Sophomore midfielder Elena Leahy stopped another LIU offensive move with a stellar block in front of the goal with six minutes left in the half. Weets kept the Hoyas’ score only down by one with a kick save during the Sharks’ next possession. The veteran keeper would go on to notch 6 saves, the sixth time this season that the reigning Big East Defensive Player of the Year has registered at least 6 saves in a day’s work.

After failing to generate a shot on goal in the first half for the second straight game, Georgetown’s offense wasted no time in scoring once the teams came back from the locker rooms. Just over two minutes into the second half, the Hoyas capitalized swiftly on their first penalty corner of the game when sophomore midfielder Sophie Towne hit a pass in front of the goal. A tip off of the stick of junior forward Vivienne Trumpbour was enough to sneak the ball past Long Island goalkeeper Maggie Streichert and tie the game at 1-1.

Towne was not the only underclassmen who played a major role in powering Georgetown’s effort on Sunday. Between midfielders Julia Hall, Lily Jamison and Sydney Yodh, and backs Madison Frank and Kelly O’Connor, first-years filled five of the 11 spots on Sunday’s starting roster. After the game, Longacre commented on the youth of her group of Hoyas, noting that 19 of the 20 players on the roster are in their first or second year of college field hockey.

Georgetown’s relative inexperience did not show in the fourth quarter, a fast-paced, hotly contested battle between the two sides. The Hoyas nearly won when Towne unleashed a grounder from near the edge of the circle that came within inches of clipping the right goalpost. Just over a minute later, Streichert saved the day for Long Island by diving to deflect a powerful try from Yodh.

Just when the game seemed destined for overtime, LIU forward Kaitlyn Olton passed the ball to Paez, who popped it into the right edge of the goal cage with under 20 seconds on the clock to clinch the game for the Sharks, 2-1.

The Hoyas hope to earn their first Big East win of the season Sept. 23 at 1 p.m. when the Providence College Friars (3-5, 1-0 Big East) visit Cooper Field.