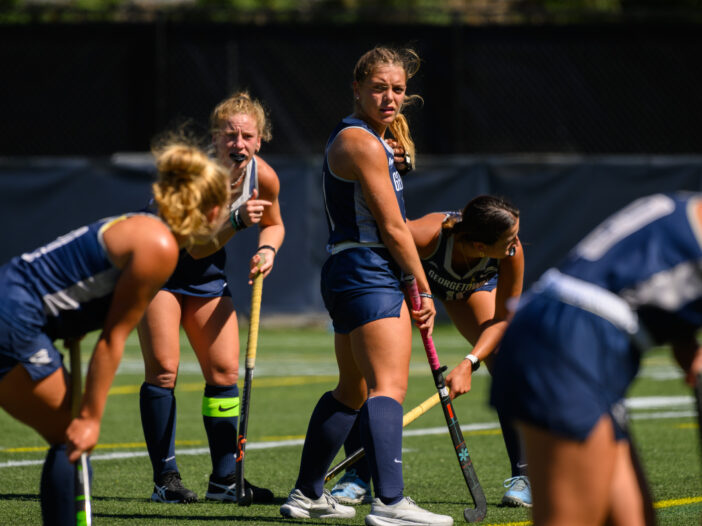 Despite almost three full quarters of even play, Georgetown University’s women’s field hockey lost, 4-0, to the Rider University Broncs, as the Broncs notched three goals in the fourth quarter to cement their victory.

The Sept. 25 afternoon game on Cooper Field began with a hopeful start for Georgetown (3-7, 0-2 Big East), as the Hoyas maintained possession and kept the ball mostly in Rider’s (4-4) defensive end in the first half.

Even though Georgetown had several offensive pushes, outshooting the Broncs three shots to none and earning two penalty corners in the second quarter, they struggled with execution. Despite persistent efforts from sophomore midfielders Sophie Towne and Emma van der Veen, who had seven and six shots in the game, respectively, the Hoyas were unable to score.

Both teams entered the third quarter looking like they would jockey for control like they did in the first half, as they exchanged offensive presses while both defenses held strong.

However, towards the end of the third quarter, the momentum of the game began to shift toward Rider, as the Broncs found their first goal after pressuring the Hoyas in their offensive third.

Coming off of a penalty corner with a little under two minutes left in the quarter, Rider midfielder Indy Zoontjens got a straight shot off that sailed past the diving fifth-year goalkeeper Ciara Weets to finally break the deadlock.

Georgetown made several efforts to level the score in the next ninety seconds, including two penalty corners as time expired in the third quarter. Despite these two last-second chances, the Broncs defense remained tight and the Hoyas were unable to record a shot on target, sending the ball out of bounds to end the quarter.

After Rider put itself on the board, the Hoyas found themselves struggling to recover for the rest of the game while the Broncs began to find even more of an offensive stride.

In the first minutes of the fourth quarter, the Broncs put strong pressure on the Hoya defense, scoring two quick back-to-back goals.

First, just 52 seconds into the final quarter, the Broncs pummeled Weets and the defense with several shots and deflections in the crease, and Rider forward Valeria Perales was able to angle the ball into the back of the net amidst the chaos. The Broncs continued to push against a fatigued Georgetown defense, earning three quick penalty corners within the next two minutes. The third penalty corner led to their third goal, as Zoontjens again took the helm, sending a long ground ball into the corner of the net off of the corner inbound.

Despite putting together several aggressive offensive drives in the following ten minutes, the Hoyas were still unable to connect in the crease and find good shots. Rider goalkeeper Kaitlyn Tomas came up big for the Broncs with three saves in the fourth quarter to contribute to her eight total saves in the game.

With just over three minutes left in the game, Rider found another opportunity to split the ranks of the Hoya defense as Perales streaked down the field on a fast break, taking the ball by herself all the way to the goal and placing it in the corner past Weets who had rushed out to stop her run.

The Hoyas did not put together another run in the last minutes of the game, and the score ultimately stood at 4-0 at the final buzzer.

“Sunday’s result unfortunately was not a good representation of how the game went for us. We moved and possessed the ball very well for a majority of that game and had many opportunities,” she said. “Rider’s GK and defense played extremely well and made scoring difficult and they also took advantage of the opportunities given. Our main focuses going into this week are finishing and counter defense.”

Georgetown will look to rebound from this loss as they travel to Philadelphia to take on Big East competitor Temple on Friday, Sept. 30 at 4 p.m.