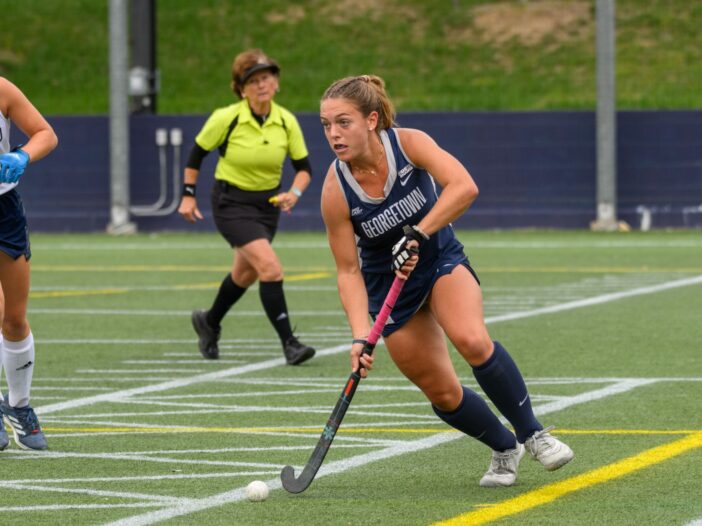 After an hour of regulation and almost a full 10-minute overtime period, Georgetown field hockey captain and graduate goalie Ciara Weets made a spectacular diving stop on a Longwood University breakaway.

An untimely bounce off of Weets put the ball right back in the possession of Longwood forward Maroussia Walckiers, allowing Walckiers to bury her next shot and win the game for the Lancers. Ultimately, the Longwood Lancers (4-12, 1-5 MAC) left the Hilltop with a 3-2 overtime victory over Georgetown (3-14, 0-6 Big East) on the Hoyas’ senior day.

The Hoyas came roaring out of the gates in their final home game of the season. Georgetown drew first blood, scoring on a corner five minutes into the quarter. After a beautiful pass in, sophomore midfielder Elena Leahy tapped it to junior forward Vivienne Trumpbour, whose one touch was all it took to send the ball flying through the Lancers’ defense and into the goal.

The Hoyas scored again less than five minutes later, after Trumpbour forced a Lancers turnover and slickly navigated around the goalie to send the ball into the net. Just under a minute later, Longwood’s corner attempt was blocked by the Hoyas despite a tricky wraparound lefty shot from the Lancers. The Hoyas took a 2-0 lead into the second by capitalizing on their opportunities while stifling Longwood’s.

Longwood dominated the second quarter but were only able to scratch across one goal midway through the quarter via a scrum around the net, where Walckiers volleyed a ball over a diving Weets. Still, the Hoyas’ defense played well enough to go into halftime maintaining a one-score lead.

The third quarter played out very similarly, with the Hoyas only surrendering one goal despite many promising opportunities from the Lancers. The one goal came on an opportune rebound, with Longwood forward Floor Schouten getting credit for the goal.

After halftime, the Hoyas were unable to capitalize on their offensive opportunities. Although Longwood played with one fewer player for two minutes in the third quarter due to a green card, Georgetown did not muster a single shot on net in this span.

As the game hung in the balance in the fourth quarter, the Hoyas’ defense once again stepped up and were able to keep the Lancers out of the net despite their 4 corners in three minutes. With about six minutes left, the Georgetown offense finally came to life but did not break through and score. The teams entered overtime on Cooper Field.

Overtime was more of the same back-and-forth play. The Hoyas committed a costly penalty with 3:11 remaining that left them down a player for two minutes, yet stellar defense once again saved them from defeat. However, with less than a minute left, a good initial stop by Weets was not enough and Walckiers scored the winning goal for the Lancers.

Although the Georgetown offense looked potent to start the game, they never came close to hitting the back of the net again after their early flurry. Offense has been a problem for the Hoyas throughout the year, as they’ve been shut out nine times.

Will Jadkowski, a D.C. resident attending his first-ever Hoyas sporting event, said the shift in momentum following the Hoyas’ strong first quarter was crucial to the loss.

“They started really well, they were up two points right away then I don’t know — the energy shifted and Longwood has been catching up,” Jadkowski said.

Although the Hoyas have no more games left to play at Cooper Field this year, they have two more chances to end what has been a disappointing season on a high note.

Next up, they face Villanova (10-6, 2-4 Big East) Friday, Oct. 28 in their final conference matchup of the year. Then, Georgetown will conclude its regular season Sunday, Oct. 30 against Drexel (10-6, 3-2 Colonial Athletic Association) in Philadelphia.