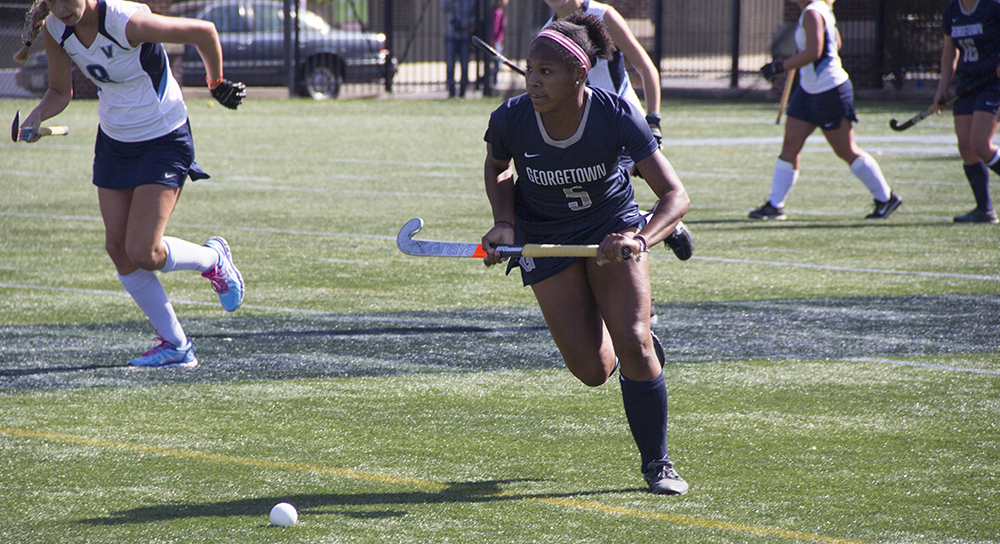 The Georgetown field hockey team (8-9, 1-3 Big East) will play its last two regular season games against Connecticut (17-0, 4-0 Big East) at home and William and Mary (6-11, 1-4 Colonial Athletic Conference) in Virginia this weekend. The Hoyas suffered a tough loss against Big East opponent Temple in a 3-1 finish last weekend before falling to Saint Joseph’s 6-3.

The Hoyas beat Big East rival Villanova 2-1 earlier in the season, and if they can beat UConn they will be able to clinch a playoff spot in the Big East tournament and continue their season. Georgetown has not defeated Connecticut in 18 years, and this is the first time in 11 years that the game will be played in Washington, D.C.

Head Coach Shannon Soares was disappointed about the losses against Temple and Saint Joseph’s last weekend.

“We came off of a really tough weekend away in Philadelphia. We played a fantastic game against Temple but gave up the game in the last three minutes, but we played really well. On Sunday, we played atrocious against Saint Joe’s, a tough opponent, and we clearly didn’t show up.”

In preparation for the matchups against UConn and William and Mary, Georgetown has been taking special steps in practice.

“We ended the weekend on a really sour note, so Tuesday we spent a lot of time focusing on ourselves and adjustments that we needed to make from the errors we made against St. Joe’s,” Soares said. “On Wednesday, we spent a lot of time preparing for UConn, simulating their press and enforcing our players to outlet successfully. We also have been practicing our press against their out-letting tendencies.”

Despite the two losses last weekend, the Hoyas have had a strong offense all season. Junior forward Aliyah Graves-Brown and freshman forward Helena Masiello have each scored five goals, while junior defender Devin Holmes and senior forward Sarah Butterfield have scored four.

Junior goalkeeper Rachel Skonecki has made 133 saves and has started all 17 games. The Hoyas are 5-2 at home, so playing Connecticut on Cooper Field will be a significant boost. Georgetown lost 6-0 to Connecticut last season, though Skonecki had 10 saves and senior midfielder Emily Weinberg and Graves-Brown both had shots on goal.

UConn has not lost so far this season and has guaranteed a spot in the Big East tournament. The Huskies have played many high scoring games, including victories over Villanova and Temple in 10-0 and 8-0 finishes, respectively.

UConn has scored 104 goals, averaging 6.12 goals per game, while its opponents have only scored six goals all season. Sophomore goalkeeper Nina Klein has made 37 saves and recorded eight shutouts. The Huskies have also had 149 penalty corners compared to 52 by all opponents. Sophomore forward Charlotte Veinter has scored 30 goals this season, while sophomore midfielder Casey Umstead and senior midfielder Roisin Upton have each scored 12. The Huskies are clearly a powerhouse team, and the Hoyas must bring their best game in order to give UConn its first loss of the season.

“In order to put together a quality match against one of the best opponents in the country, we are going to have to show up and be very sharp,” Soares said. “We must be committed to our plan, and the one advantage we have is that UConn will play on an infield surface for the first time in over a year. They have to play us on a surface they don’t regularly train or compete on. But if we show up making common errors and are not sharp with basic skills and fundamentals, that will kill us.”

William and Mary won its last game 2-1 against VCU to end a four-game losing streak. It has had 34 goals and 228 total shots compared to 196 shots by opponents. Senior forward Pippin Saunders leads her team with 11 goals, followed by sophomore forward Cammie Lloyd with eight. Senior goalkeeper Meredith Savage has faced 192 shots and made 69 saves for a .600 save percentage. William and Mary has not shut out a team this season and has failed to score in four games.

The Hoyas will face off against the Huskies at 12 p.m. on Cooper Field this Saturday.