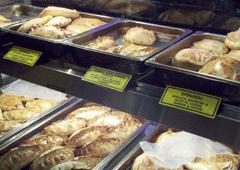 After spending two weeks’ worth of paychecks at Target in Columbia Heights, I was looking for a quick snack that was cheap but satisfying. Wandering around the area, I stumbled upon a cute little diner with an even cuter name, Julia’s Empanadas. Given the mom-and-pop feel, I envisioned Julia herself to be in the kitchen making hundreds of golden-brown pockets of heaven.

For the empanada noobs out there, let me fill you in on what’s in this pastry (pun intended). Hand-formed dough surrounds a filling, usually consisting of different types of meat, vegetables and spices. They’re usually served hot and can be spicy depending on the flavor. Different varieties of empanadas are found in Central and South American cuisine and other countries too. Indians have their samosas, Italians have their calzones and Americans? We have Hot Pockets.

But Julia, hailing from Chile, specializes in Chilean empanadas, which are baked, not fried and have a thick, slightly chewy dough. Their selection is not overwhelming, but of course, I couldn’t decide. There are seven varieties: Chilean-style beef, Jamaican patty, chorizo with black beans and rice and turkey with spring onion. For vegetarians, there is spinach with mozzarella and ricotta as well as a vegetarian option that changes weekly. The vegetarian empanada seemed popular, because of the few diners who came in at 3 o’clock on Presidents’ Day, all of them (male, twenty-something, yuppie/hipster) ordered vegetarian.

I settled on the Saltenas, as per the advice of the man working behind the counter — Julia’s husband as I later found out. The Saltenas empanada has shredded chicken, potato, green peas, hard boiled egg, raisins, green olives and onions. For only $5.45, I got the “Good Meal Deal,” consisting of one Saltena, one fruit empanada and one drink — I chose a can of guava nectar, trying to be “authentic.”

The Saltena was savory, and the mildly spicy sauce had touches of sweetness thanks to the raisins. I must say I wasn’t a fan of the olive pieces, but that could just be because I’m not a fan of olives. Also, I was surprised that I didn’t even notice the hard boiled eggs — which is probably a good thing. In all, it was good, but not amazing. Honestly, I wish I had chosen the Jamaican patty instead.

My fruit empanada was filled with sliced peaches and pink guava goo. The crust was thicker than the savory empanada and dusted with powdered sugar. Halfway into eating the guava empanada, I severely regretted drinking guava nectar. Now, I haven’t met a dessert that I didn’t like, but even this was too sweet. I ended up squeezing out some excess guava goo midway through.

I would’ve tried another savory empanada, but after two in my Good Meal Deal, I was full. So while these little pastries can be surprisingly filling, my advice would be to try the varieties, splitting them with friends to find one you like. And definitely don’t wash down your fruit empanada with fruit nectar.