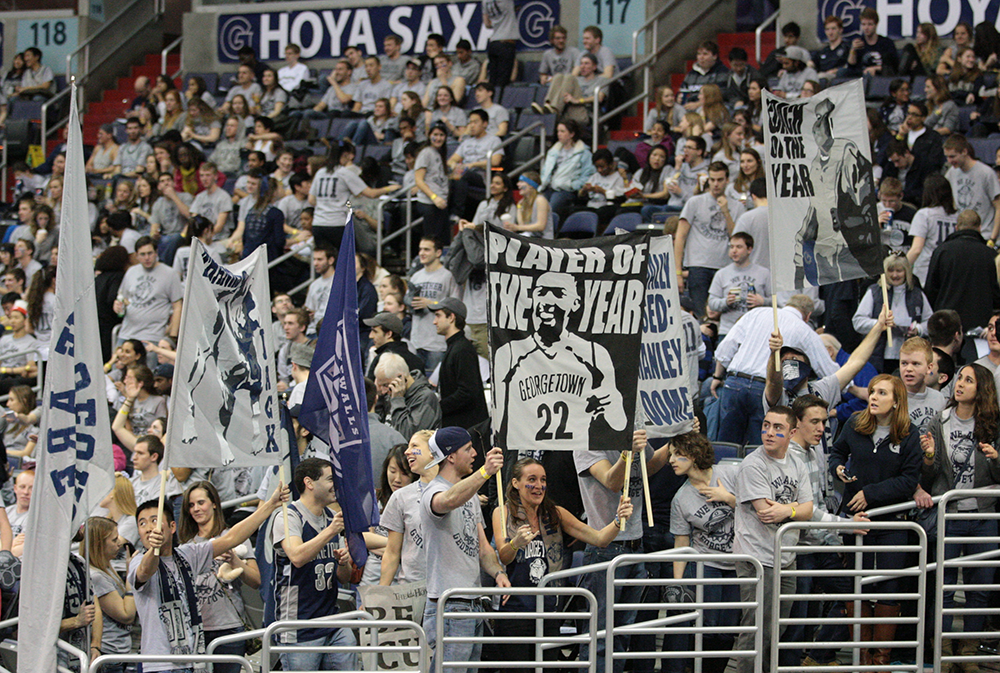 On March 18, the Georgetown basketball team beat West Virginia 77-65 in the opening round of the National Invitational Tournament in the first men’s basketball game played in McDonough Arena since 2009. Although it was little more than a consolation win at the end of a disappointing season, 2,133 fans packed McDonough Arena to urge on the Hoyas.

Georgetown did not disappoint.

“[The atmosphere] was unbelievable,” men’s basketball Head Coach John Thompson III told THE HOYA after the game. “I’ve seen a lot of games here, and I said before the game that I hoped the atmosphere would be like those games. And it was.”

The game was only played on campus because the cavernous, 20,000-seat Verizon Center, Georgetown’s normal home venue, was playing host to the Ringling Bros. Circus that evening. However, the raucous crowd prompted questions of whether the Hoyas actually receive a better home advantage in McDonough’s cozier environs.

Georgetown’s Big East rival Villanova employs a similar model, holding most of its home games in the on-campus, 6,500-seat Pavilion and only playing its marquee games at the Wells Fargo Center, an NBA arena home to the Philadelphia 76ers. The Pavilion, though small, has developed a legendary reputation for its excellent atmosphere.

Because of the arena’s substantially smaller capacity, Georgetown could never adopt a similar model and play more of its home games in McDonough. The larger size of Verizon Center, also known as the Phonebooth, makes it a much more sensible fiscal option, and it has reached capacity for significant games.

However, last season, Gerogetown failed to attract many fans to the Chinatown arena, drawing an average crowd of just 8,670 per home game, the lowest attendance since the 2004-2005 season and well below the peak years of 2008-2012, when Verizon Center averaged crowds of over 12,000 per game.

Is the Georgetown fan base decreasing? This appears to be a distinct possibility, especially considering that during the 2012-2013 season, in which the Hoyas won a share of the Big East title and earned a No. 2 seed in the NCAA tournament, the mean home crowd size was only 10,911, almost 2,000 less than the year prior.

However, an investigation of the underlying data suggests that though Georgetown might not achieve the attendance of prior years in the future, its numbers are not in steady decline.

First, it is important to note that in the 2012 nonconference season, Georgetown had a stretch where it played Towson, Longwood and Western Carolina at home successively. Attendance did not exceed 8,500 in any of these games against low-profile competition, and if these games are excluded from the data set, average home-game attendance rises to 11,750, much closer to the norm.

Meanwhile, the dip in attendance last year had several causes. The first, and most obvious, is that the Hoyas had a relatively poor season. Last year’s game against Villanova, the Big East champion, capped off a five-game losing streak. Meanwhile, the home matchup against Creighton, second in the conference, came so late in the season that Georgetown’s NCAA tournament hopes had nearly disappeared.

“Last year was an usual combination of bad juju between the team choking so dramatically in the tourney the year before, low expectations and bad performance,” Hoya Blue Vice President Nick Babyak (MSB ’15) said. “When the team is mediocre, it’s tough to convince people to trek down to the Phonebooth if the opponent is no good either.”

Indeed, the largest influence on attendance last season was perhaps the quality of opposition that the Hoyas played. The reformation of the Big East marked a significant change in the caliber of Georgetown’s opponents.

The “old” Big East contained an eclectic mix of small and large schools. Teams in the upper tier of the conference, like Syracuse, Louisville, Notre Dame, UConn and Pitt, have enrollments of over 20,000, large travelling fan bases and alumni scattered throughout the Washington area. Because these teams are generally in the national title conversation and their fan bases travel so well, the Phonebooth usually filled for their games against the Hoyas.

The data from the last decade of Georgetown basketball allows for some intriguing observations. Since the beginning of Thompson’s tenure in the 2004-2005 season, home-game attendance has trended slightly upward, however there is significant variance within each season that speak to more specific trends.

Weak opponents attract weak crowds, as demonstrated by the relatively low attendance numbers during the nonconference season every year, which usually are between 5,000 and 10,000, a time when Georgetown usually plays a few “cupcakes.” Meanwhile, attendance spikes for marquee matchups. For example, every Syracuse home game is usually the most-attended game of the season — the final game against Syracuse in 2013 was a record crowd at Verizon Center at 20,972. These games represented peaks in attendance, and though the Hoyas will resume their series with their greatest rival next season, seasons without a home game against Syracuse will likely feature lower attendance.

Likewise, because the Hoyas no longer play the former Big East heavyweights, it is unrealistic to expect attendance to reach the heights of recent years. However, a comparison of the home games against current Big East teams that Georgetown played in both 2012-2013 and 2013-2014 shows only a small decline in attendance. It is fair to assume that this decrease was at least partly due to the Hoyas’ poor record, and for this reason, a significant overall decline in the Georgetown fan base seems unlikely.

“I have a more positive outlook on this year,” Babyak said. “This year we’ll have busses shuttling from campus directly to Verizon Center. The team looks better from a talent standpoint this year with seasoned players and a highly rated freshman class.”

Big games bring big crowds. As part of the new Big East, Georgetown will not be playing as many marquee conference games as in the past. However, this year, the Hoyas will host big nonconference home games against elite programs like Kansas, and statistics do not suggest that attendance will continue its decline.

Instead, a young Georgetown team with loads of talent will hope to find a greater home court advantage. All that remains is to see how many people we can fit into the Phonebooth this season.