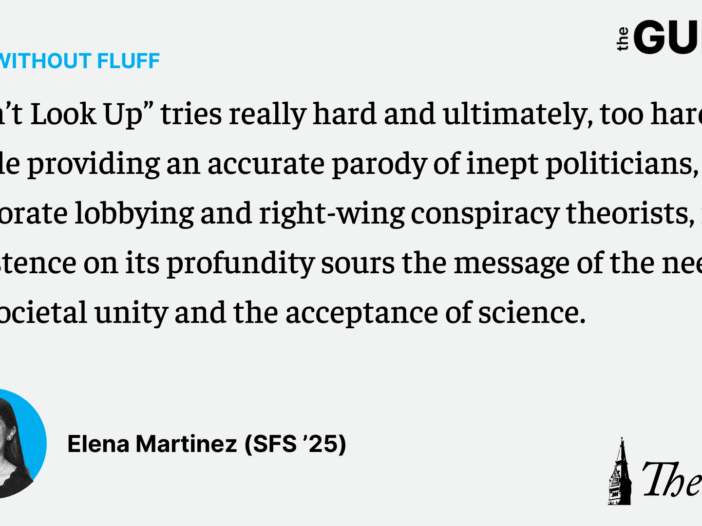 Without a hint of irony, the star-studded cast of Adam McKay’s 2021 film “Don’t Look Up” seeks to preach to us about the dangers of our scientific ignorance. Centering on an impending apocalypse, the film features strong performances from Oscar-winning actors Jennifer Lawrence and Leonardo DiCaprio, but the brazen moral of its questionably written, didactic screenplay overshadows the stardom of the cast.

“Don’t Look Up” follows Ph.D. candidate Kate Dibiasky (Lawrence) and astronomy professor Randall Mindy (DiCaprio) after the pair discover a comet on a direct trajectory toward Earth, one whose impact will lead to the complete destruction of humanity. After U.S. President Janie Orlean (Meryl Streep) dismisses the seriousness of the comet, Kate and Dr. Mindy leak the information to the press and embark on a media tour.

On the fictional talk show “The Daily Rip,” Kate becomes frustrated with the hosts (Cate Blanchett and Tyler Perry) as their chipper tone diminishes the importance of her discovery. She chews out the show and its audience, scorning them in an expletive-ridden rant that becomes a meme. Dr. Mindy, on the other hand, retains his composure and becomes a media darling while also beginning an affair with Daily Rip host Brie Evantee (Blanchett), something that quickly unravels into its own series of minor disasters throughout the film.

The writers of “Don’t Look Up” treat the film like one big inside joke with the audience. Satirical scenes poke fun at both those blissfully unaware and willfully ignorant of the impending doom of our current political and environmental crises. At one point, superstar Ariana Grande makes an appearance as a fictional pop star whose breakup with her rapper boyfriend (Kid Cudi) gains more media attention than Kate and Dr. Mindy’s news of an Earth-ending comet. Grande’s presence in the film furthers the idea that the film’s producers believe the majority of viewers will be in on the joke, with the added celebrity appeal to Generation Z. “Don’t Look Up” satire, however, is perhaps too dead-on to sell its commentary off as intelligent, and leaves viewers cringing at the obviousness of its themes. At some point, they were just beating a dead horse.

That is what I find so hilarious about this film. At one point in the writers’ room, someone genuinely posited that this film’s target audience consisted of young people whose affiliation with TikTok and hoverboards means that they need to hit us over the head with tragically overt moralistic warnings. As if we aren’t the generation that is capable and has been capable of eliciting serious change where our predecessors have failed.

Nearly every supporting cast member portrays a heinous jerk, whose inclusion in the film only furthers the screenwriter’s belief of their audience’s ignorance. Jonah Hill, in his role as President Orlean’s chief of staff as well as her son, is a character that only exists for satirical effect. He is especially noteworthy because you can’t help but hate him while laughing at him as he carries his Hermès Birkin bag.

Also worth mentioning is Mark Rylance, who brilliantly plays billionaire tech CEO Peter Isherwell, whose status as a top donor to the Orlean campaign allows him to derail efforts to reroute the comet. His soft-spoken yet ominous characterization is appropriately unsettling, reminiscent of real-life sociopathic tycoons such as Elon Musk or Jeff Bezos. Isherwell proposes that the comet will be destroyed into several pieces and mined for its precious rare earth metals. But, pitted against the academics who initially identified the comet, Orlean then leads a movement to deny its existence with the slogan, “Don’t look up” (roll credits).

As expected, Isherwell’s plan fails, and the comet inevitably hits the earth. The film ends with Kate and Dr. Mindy enjoying one last dinner with their loved ones, including Kate’s new gamer boyfriend played by teen heartthrob Timothée Chalamet, another directorial decision surely made only to appeal to Gen Z.

In a film that hits you on the face one too many times with its self-proclaimed intelligent theme, the simplicity of the final dinner scene ends “Don’t Look Up” on a somber note. Surrounded by warm lighting and casual quips of future endeavors that will never happen, it is a gentle reminder of the preciousness of our lives with an underlying sense of urgency for the film’s more thoughtful viewers.

The fact that the film is even brave enough to touch on the corporate infiltration of politics, space capitalism and fearmongering is commendable. In a time where the realm of celebrity overlaps with government, Hollywood has a brave sense of self-awareness in its recognition of trusting inexperienced and profit-driven sellouts to save the world.

“Don’t Look Up” tries really hard and ultimately, too hard. While providing an accurate parody of inept politicians, corporate lobbying and right-wing conspiracy theorists, its insistence on its profundity sours the message of the need for societal unity and the acceptance of science. The commitment of its cast inspires an appreciation for their effort, but I am left wanting more, wishing that this nearly meta recognition of individual responsibility would better reflect the importance of grassroots revolutions as well as the youth often behind them.

Though “Don’t Look Up” does well in criticizing the self-interested and greedy nature of America’s government, it is a little too glaringly moralistic to elicit thoughtful discussion. Its characterization depicts barely-fictionalized versions of politicians and billionaires in our current society, and its climate change analogy is floating just shy behind the comet. Most of the film’s audience will probably roll their eyes at the preachiness of the comedy, but for the few viewers who are not in on the joke, one can only hope that this in-your-face satire may very well begin conversations about these issues.

Elena Martinez is a first-year in the SFS. Film Without Fluff appears in print and online every other week.