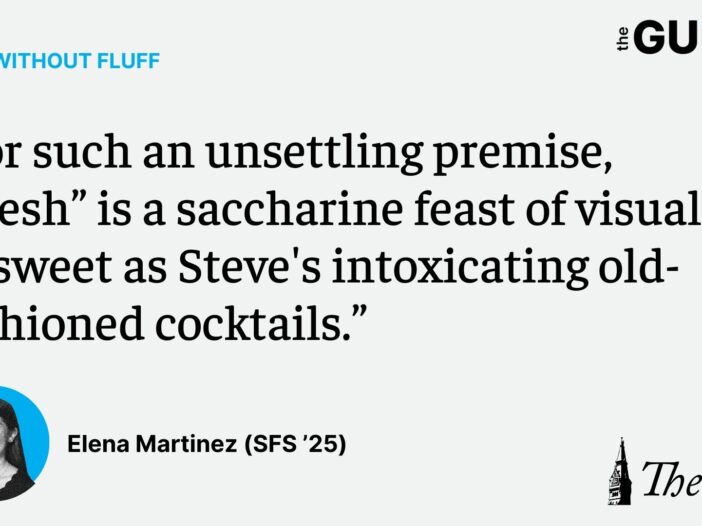 CW: This article discusses a film that depicts kidnapping and physical violence. Please refer to the end of the article for on- and off-campus resources.

In the thriller “Fresh,” the cannibal gaze is an exaggeration of the male gaze. Surprisingly, both reflect the other in the normalized consumption of women as commodities, literally and figuratively.

Released on Hulu March 4 and directed by Mimi Cave, “Fresh” explores the possibilities of the worst-case dating scenario that your Internet-wary mom may try to convince you will happen before your Tinder date. The film’s tagline — “He seems nice” — best encompasses the film, with the villain only revealing his insidious nature after gaining the heroine’s trust.

The film boldly critiques the manner in which society wrongfully objectifies women, with the female form as a recurring motif to the point that women are literally served to men on a silver platter. “Fresh” is a rom-com turned thriller woven through with social issues about female representation in society and their treatment by men. And for every hungry male, Fresh is a reminder that women are not afraid to bite back.

By using cannibalism as a bloody metaphor for dating violence, “Fresh” offers a haunting truth about where women fall in society today. “Fresh” explores how patriarchal society has objectified women to the point of treating them like pieces of meat. The key plot point of Steve selling women’s meat to other cannibals and choosing to only consume women exemplifies this social critique.

Noa (Daisy Edgar-Jones), a young woman exasperated by the disappointing array of online suitors, takes a chance on a charismatic stranger named Steve (Sebastian Stan) whom she meets at the supermarket. Only after being enticed to his home with the promise of a weekend getaway does she realize that his skills as a plastic surgeon are employed for a more sinister purpose: He drugs, kidnaps and butchers women to sell to high-paying men, commodifying their bodies and enjoying the leftovers himself.

The opening credits of “Fresh” begin nearly thirty minutes into the film, harshly shifting the film’s false premise as a delightful rom-com to unveil a suspenseful thriller. Just as Steve entraps women into his private mansion-slash-slaughterhouse with Ted Bundy-reminiscent charm, this creative choice breaks the illusion of a sweet love story to reveal the darker side of the story.

Mimi Cave’s directorial choices are incredibly compelling, with the film beginning in the light-hearted, formulaic way most romantic comedies do. An innocent girl who has tried all the dating apps, a best friend encouraging her to get back out there and an attractively suave love interest.

Visually, the film is quite the cinematographic masterpiece. For such an unsettling premise, “Fresh” is a saccharine feast of visuals as sweet as Steve’s intoxicating old-fashioned cocktails that he uses to drug Noa. Orange filters and mellow sceneries feed into an almost romantic tone as Noa and Steve embark on a sickly delightful relationship. However, these warm images of a budding romance morph into red flags as Noa finds out the truth about Steve.

Stan’s performance falls right into the rom-com trope. He is awkward but cute, passionate but sweet. And, at the thirty-minute mark, just with a few facial expressions and the sadistic delivery of certain lines of dialogue such as when he calmly tells Noa how he intends to keep her alive as long as possible in order to keep her meat fresh, he becomes absolutely terrifying.

Women like Noa, who seek to offer their creativity, intelligence and love when crafting meaningful relationships, are exploited in the purity of their intentions by the societal expectations of men. Like the women locked away in Steve’s home, women in our society are broken down and packaged for male enjoyment.

In 2019, the United Nations reported that while women make up a smaller percentage of overall homicides worldwide, 82% of intimate-partner homicide is committed against women. Even as these statistics rise and fall, societal measures remain in place that normalize violence against women. Though laws may become more stringent and women are continually advised about the dangers of strange men, no one has stopped to ask why the responsibility of prevention falls upon the shoulders of women. Though “Fresh” is a fictional film, its horror is rooted in realities that women face every day.

Thousands of women, just like Noa, who walk with keys in hand and locations shared with friends, are victim-blamed for falling into these dangerous situations. But it is Penny (Andrea Bang), a fellow captive, who acts as a voice of reason and encouragement through the film and offers a refreshing reminder to female viewers that stands as the crux of the movie’s narrative: “It’s not our fault, Noa.”

As much as one would assume that Stan’s cannibal character may dominate the film, the kinetic, headstrong performances by Edgar-Jones and Bang captivate viewers, often making one forget they are Steve’s victims and on track to their deaths.

“Fresh” delivers on the continued desire for stories that put power back in the hands of female victims, highlight female collaboration and remind viewers of the dangers hidden in an increasingly casual dating culture.

This genre-blending thriller depicts horrors all too real for women in today’s society, using gory cannibalism to show how the ravenous male gaze is wholly detrimental to the survival of women. “Fresh” is a film that skillfully uses its color palette and culinary imagery to paint a picture of destruction to women in our contemporary society.

Elena Martinez is a first year in the SFS. Film Without Fluff appears online and in print every other week.