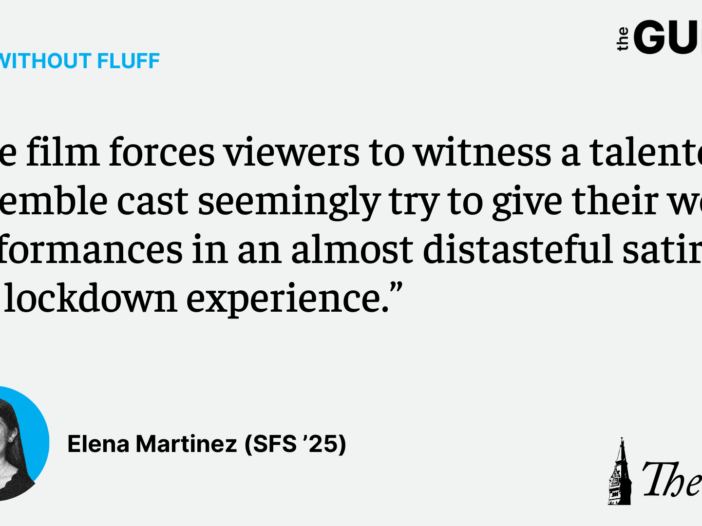 Against every attempt to escape the debilitating reality of COVID-19, audiences seeking refuge in the comfort of media will be disappointed upon watching Judd Apatow’s 2022 film “The Bubble.” The film is a pitiful vanity project rooted in poor performances and canned-beyond-expiration-date humor.

Released by Netflix on April 1, the film forces viewers to witness a talented ensemble cast seemingly try to give their worst performances in an almost distasteful satire of the lockdown experience.

“The Bubble” follows struggling actress Carol Cobb (Karen Gillan) who returns to the film franchise that originally shot her to fame. Taking place during the height of the COVID-19 pandemic, the mockumentary-style comedy witnesses an ensemble cast struggle to film the sequel amid health restrictions, overbearing producers and quarantine.

Those familiar with the happenings within the film industry during the pandemic will recall that “The Bubble” references Universal’s controversial decision to continue filming a very similar action-adventure sequel.

Every character’s assigned trope is excessively played up to the point that their intentional insufferability is nearly too much to bear. For example, when Howie accosts executive producer Gavin (Peter Serafinowicz) for strict health protocols, the disconnect between celebrity and Average Joe mirrors the lack of self-awareness put into the script written by celebrities.

When TikTok influencer Krystal Kris (Iris Apatow), whose status as a social media maven qualifies her to join the film, is recorded sneaking out of the COVID-19 quarantine bubble to party with production assistant Carla (Galen Hopper), her world of celebrity comes crashing down.

It is instances like these where “The Bubble” exercises just enough consciousness that it seeks to critique Hollywood without exactly reaching the clearest conclusion about what makes the elite so ignorant. The inclusion of the younger Apatow daughter — who ironically was placed in this film because of her social media stardom and her last name — as a vapid teenage celeb unfortunately draws more attention to Hollywood nepotism than the consequences of partying during a pandemic, which her character is meant to portray.

The film concludes when the cast commences its plot to escape the bubble, a not-so-horrific experience that takes place in a luxury hotel supplied with entertainment, alcohol and excess.

“The Bubble” is perhaps evidence that we have reached the end of the era of celebrity culture, in which Hollywood’s attempts to relate to the common folk have become feeble against the prevalence of narcissism and excessive luxury.

“The Bubble” made the problems of such a trend abundantly clear as one cannot help but want to scream at the TV at the film’s glamorization of the very serious pandemic. If anything, the romantic subplots and personal conflicts did not humanize the characters, but rather drove a wedge further between them and the viewers.

Most people’s concerns in 2020 were not the inability to party or socialize, but the unavoidable fear of losing their loved ones or themselves to the pandemic. Apatow attempted to emphasize how far removed Hollywood was from the struggles of Americans going through lockdown and illness, but he ironically only succeeded in reinforcing Hollywood’s tenuous grasp on reality.

Elena Martinez is a first-year in the SFS. Film Without Fluff appears online and in print every other week.