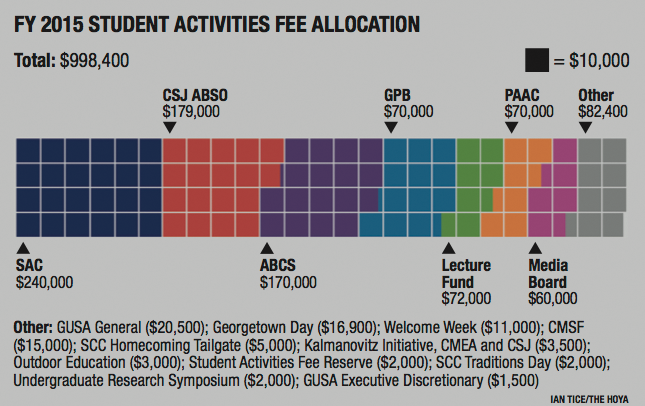 The GUSA Finance and Appropriations Committee released its final budget for the 2015 fiscal year, cutting the Collegiate Readership Program and funding for GUSA while also putting Georgetown Day under the control of the Division of Student Affairs.

Georgetown University Student Association executives Trevor Tezel (SFS ’15) and Omika Jikaria (SFS ’15) requested a $3,000 increase for the GUSA General Fund and a $500 increase for the GUSA Executive Discretionary Fund during the two-week public discussion period following the March 5 draft budget release, but their appeal was denied. The GUSA General Fund was allotted $20,500 for the 2015 fiscal year.

“We requested an increased number in order for GUSA to continue supporting the student groups that might not receive funding through advisory boards,” Tezel wrote in an email. “This number was cut by Fin/App, and we understand their need to work on a budget when it came to this proposal.”

The allocation shows an 8.29 percent decrease — translating to a decrease of $1,700 — in the GUSA General Fund from last year. The Executive Discretionary Fund, which allows for executive access of funds without senate approval, was allocated $1,500 of the requested $2,000.

“Overall, we were not happy with the budget numbers that Fin/App has proposed for GUSA, however,” Tezel wrote.

A new addition to the budget is the “Sunny Day Fund.” It will consist of $1,500 set aside for GUSA to use innovatively throughout the year.

“Even with the ‘[Sunny] Day Fund’ being proposed by Fin/App, basic GUSA operational costs run to over $2,000,” Tezel wrote. “The definition of a ‘[sunny] day fund’ means that it would be used in case something suddenly popped up. Instead, it’s creating an additional hurdle for the executive to operate.”

However, Fin/App Chair Seamus Guerin (COL ’16) states that the allocated funds will allow GUSA more flexibility as issues come up during the course of the year.

Another change to the budget for the 2014-2015 school year is elimination of the Collegiate Readership program, which provided free copies of The New York Times, The Washington Post and USA Today on campus and has been completely cut from the budget.

The Collegiate Readership Program, which began in 2008, received $14,000 in the last fiscal year. Tezel strongly disagrees with the decision.

“This was done without debate or discussion by outside parties, nor with a stated explanation or proposed alternative,” Tezel wrote. “This should not be how a widely used program like Collegiate Readership should be cut.”

Students have also expressed their concern for the loss of the program.

“I’m sad to see the access go,” Scott Syroka (COL ’16) said. “I hope something can be reinstated or we can at least get access beyond the paywalls of certain papers online.”

Guerin defended the cut and addressed concerns that students have raised about cutting Collegiate Readership.

“Funding choices are not made simply weighing one option against another, but all as parts of a larger matrix,” Guerin wrote in an email. “The committee looked at these considerations and prioritized investment in our student groups over these newspapers.”

There are seven advisory boards that work with and advise Vice President for Student Affairs Todd Olson about student life at Georgetown, including the Student Activities Commission, Performing Arts Advisory Council, Advisory Board for Club Sports, Media Board, Graduate Student Organization, Center for Social Justice Advisory Board for Student Organizations and Campus Ministry Student Forum.

“We were able to get the Division of Student Affairs to realign their funding proportionally to the advisory boards so you will see a difference in the number of dollars going from the Student Activities fee to these advisory boards,” Guerin said.

“I think that it’s understandable for GUSA to cut the budget by $1,000, because last year we were very cost effective,” former GU Welcome Week Coordinator Jeffrey Lin (SFS ’16) said.

“You want to be able to fund nearly everything but the resources just aren’t there so I’d say that’s the biggest challenge,” Guerin said. “I can say that for myself, it’s really about weighing the merits of everything.”

In order to accommodate student activities, each student pays a fee that is included in his or her tuition. This year, the student fee will increase from $153 to $156, in order to account for inflation.

Tezel has not yet signed the budget, but plans to, despite his dissatisfaction and failed appeal.

“Ultimately, because of the nature of the budget, the fact [is] that we want to make sure that we want to get this thing passed as quickly as possible, so the numbers still aren’t up in the air for a lot of these groups, and with the guarantee that we’re going to be pushing some constructive solutions to some of the cuts, including the Collegiate Readership Program,” Tezel said. “Instead of drawing out this process, it would be best for all parties if the budget was signed.”