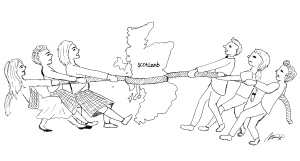 When I found out I would be studying abroad at the University of Edinburgh in Scotland, I popped in my “Braveheart” DVD and gathered my blue war paint and tartan scarf that had been hanging in my closet since my 11th birthday.

This was what Scotland was about — a kilted warrior uniting the clans of the scenic Scottish Highlands in an effort to banish the English from the land. It wasn’t until I arrived in Edinburgh and attended a Scottish independence rally that I realized how accurate this description was over 700 years later.

As a government major from Georgetown, I felt like I was doing investigative fieldwork. In exactly one year, the Scots would vote on a referendum asking, “Should Scotland be an independent country?”

It was a type of nationalism that I had studied; a people feeling unsatisfied with their government and collectively uniting against this body to form their own government. Having already gained devolved Parliamentary powers in 1999 including in the areas of health, education and the judicial system, it seemed as if Scotland had the necessary tools to transition to an independent country.

As an American studying abroad, I felt a kinship with the cause. After all, the Scottish were hoping for separation from the British — just as the Americans had hoped for and fought for over 200 years ago. As far as I could see, we were allies in the fight.

But there was undoubtedly a glaring difference about the Scottish cause and the American one. Did the Scots even want this separation from the United Kingdom, a union that has been in place for over 300 years?

While most of the students I encountered preferred drinking whiskey at the nearest pub than thinking about the referendum a year away, I insisted on pushing the topic. In general, the Scottish students I spoke with were undecided — they worried about what the separation would mean for their economy and how they felt about no longer being British.

On the contrary, with the ability to cast a vote in the referendum because of their current residential status in Scotland, my English friends claimed they felt undeserving to cast a vote. “It’s their decision to make,” they would say. “Why should I intrude on that?”

This attitude seemed to be trickled down from Prime Minister David Cameron himself. While there was definitely a political calculus behind allowing the independence vote, the fact still remains that the United Kingdom is allowing approximately 8.4 percent of its population to make the decision to leave the union.

But that is the point.

No one thought that the referendum would have any realistic chance of passing. At the time of the “Yes” rally that I attended a year before the vote for Scottish independence, the polls showed around 30 percent of residents in favor of the referendum. In the class I took at the University of Edinburgh surrounding the question of Scottish Independence and devolution, most of the British students thought the vote wouldn’t pass.

Now, with recent polls showing a dead heat in the race, people are starting to worry. Cameron is visiting Scotland and begging the Scots to vote against the referendum. So what changed in one year?

Maybe it was everyone telling them it wouldn’t happen. Maybe it was JK Rowling coming out in support of the “Better Together” campaign. They didn’t appreciate former Prime Minister Margaret Thatcher’s conservative policies that left the liberal Scots forgotten in the 1980s, nor did they appreciate the lack of revenue-raising and taxation powers in the Scottish Parliament.

The Scottish have a history of defeating the English when no one thought it was possible. If there is one thing I learned about the Scots while studying in Edinburgh, it is that the Scots have a way of pulling things off.

In 1603, when King James VI of Scotland became King James I of Great Britain and united Scotland and England, it seemed almost ironic that the union between England and Scotland would be peaceful after centuries of battle. Maybe it is appropriate that Scotland should leave in this way; a peaceful referendum that would split the two regions forever.

After all, Scotland was once its own country with its own history, culture and customs. Now the only part missing from that equation is its own independent country.

Either way, on Thursday after the votes are cast and the decision is made, I will watch “Braveheart” and drink a dram of whiskey for William Wallace and his Scottish descendants, hoping that some day they will get their freedom, at last.

Hannah Muldavin is a senior in the College. She studied abroad at the University of Edinburgh in fall 2013.