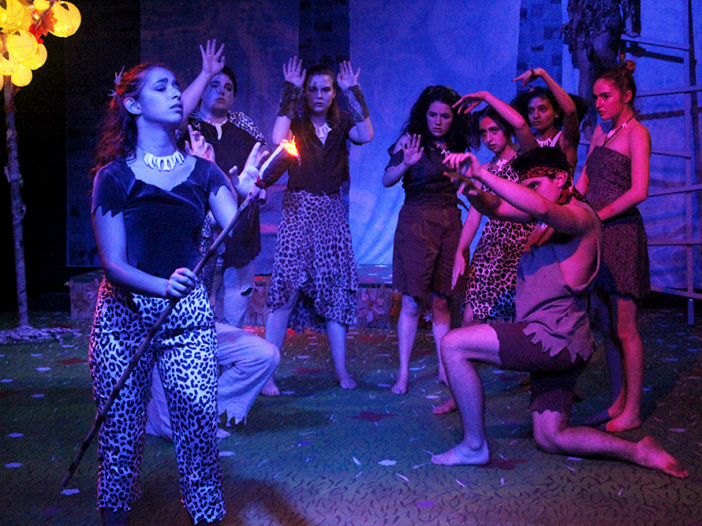 Woolly mammoths, saber-toothed tigers and a bunch of ugly cavemen romp around the wilderness at the dawn of humanity: All are present in Nomadic Theatre’s production of “Firebringer” in the Village C Theatre. Directed by Maddy Rice (COL ’20), this musical comedy is pure fun. Its brilliantly silly physical comedy, combined with an energetic cast dynamic, creates a playful experience that will leave audience members belly laughing.

The student cast and crew of “Firebringer” will bring the viewer to the Stone Age, complete with harmonizing cavemen and avian idol worship.

The larger story focuses on a prehistoric tribe with classic prehistoric problems: constant foraging but little food, bloodthirsty animals that come out at night and the constant insecurity that comes from living in a cave. “Firebringer” rose to prominence from the viral “I don’t really wanna do the work today” clip of a cavewoman doing a sassy dance about laziness, and the show comes from StarKid Productions, a theater company founded at the University of Michigan that uses social media to make timely and comedic plays.

Zazzalil, played by Lily Cratsley (COL ’23), is a bright but lazy member of this tribe who uses inventions to avoid hard work. She discovers the spear and later fire. While new technology makes life easier for the tribe, the changes are met with resistance by tribe leader Jemilla, played by Grace Crozier (COL ’21), who is threatened by Zazzalil’s leadership and the ways in which these inventions will change their lives. The story examines the unexpected ramifications of human progress and the challenges humans face as we evolve.

What makes “Firebringer” special is not its profundity, but rather its sense of fun. The piece never takes itself too seriously. From a kazoo player rocking out in the orchestra to a woman in an animal print tunic and bone necklace shouting profanity, the show manages to keep its tone lighthearted and entertaining.

The actors seemed to be having just as much fun as the audience with their high energy and enthusiasm, making everyone happy to be there.

“Firebringer” boasts a strong ensemble from the main characters to the supporting roles. Schwoopsie, played by Kristen Hodgson (COL ’22), serves as the tribe’s resident comedian, and Hodgson lives up to the role: The actress left viewers in stitches after telling “the joke,” which she had recently invented.

While “Firebringer” provided a fair amount of laughs, it also offered a poignant environmental message. Embedded in one-liners throughout the show was commentary about how humanity’s reckless search for comfort and luxury can easily overexploit the environment, which helped provide valuable stakes and timeliness for the conflict.

When Zazzalil finally gets to share her discovery of fire with the tribe, the group quickly kills every woolly mammoth in the area, using torches to burn the animals on sight. When Ducker, played by Gabe Berkowitz (MSB ’20), tries to light his hat on fire, he ends up burning the tribe’s new huts and the surrounding forest to the ground. While the label of social commentary might be a stretch for the musical comedy, the piece flirts with these topics in a not-so-subtle way without sacrificing the show’s main purpose of eliciting laughs.

While Rice admits that the show “does not solve the world’s problems” in the director’s notes, “Firebringer” holds a mirror up to humanity in its purest form. The cavemen are reflections of the pitfalls and miracles of humanity today.

For instance, Zazzalil’s tribe operates on the motto “We’re the best” — just as people today fail to recognize their own shortcomings. The tribe drops to the floor and worships Zazzalil when she brings them fire, just days after they stopped worshipping the duck. This display showcases how humans are too quick to idolize a hero.

As the narrator says, “progress comes from the need to be lazy,” so too are today’s people inventing frivolous things to make our lives easier. This dichotomy of laziness and progress makes humanity great and terrible at the same time, capable of both brilliant creation and destruction. In the same way that “Firebringer” represents the duality of humankind, the play itself simultaneously manages to offer an important message against idleness while also relentlessly delivering one punchline after the other.