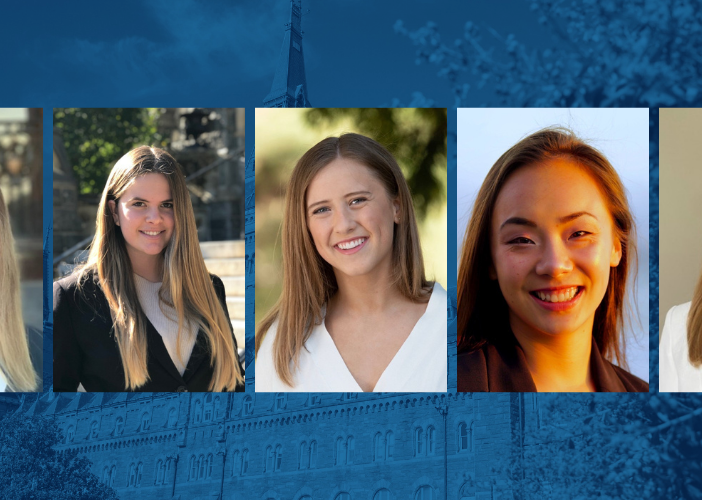 Georgetown’s first all-women team will compete in a global business venture capital competition final against 19 teams from around the globe.

Georgetown’s Team Elm will compete April 8 and 9 at the Venture Capital Investment Competition (VCIV), an event based on venture capital startup pitch analysis, due diligence and written deliverables. The event is hosted by the University of North Carolina Kenan-Flagler Business School.

Team Elm won the Mid-Atlantic regional competition in February against teams from American University, Elon University, Emory University and the University of North Carolina, where they competed to present the best hypothetical investment before a panel of judges.

Teams are judged on the quality of their diligence sessions, term sheets and partner meetings.

Gilles said it was inspiring to be a part of an entirely female team in what is traditionally a male-dominated field.

“It’s been exciting to see that people are inspired by an all-female team. At our regional competition, one of the judges remarked that he felt inspired when he saw our team competing,” Gilles wrote to The Hoya. “He has daughters and hopes that they feel empowered enough to also enter male-dominated spaces as we have.”

At VCIC, teams must conduct independent research, craft diligence questions and term sheets, participate in diligence sessions with entrepreneurs and have partner meetings with the judges. In venture capitalism, due diligence refers to investigating an investment opportunity before committing funding.

The team was commended by judges for their ability to engage with entrepreneurs, something they were told male-majority teams lacked, according to Shi.

“During the feedback sessions from our regional competition, one of the judges said that the main difference between our all-female team and male-dominated teams is that we are more cognizant of how to interact with the entrepreneur and better at establishing rapport,” Shi wrote to The Hoya.

Georgetown Entrepreneurship Founding Director Jeff Reid said it is symbolic that an all-women team made it to the final of the competition.

“The fact that they are all women is important in a symbolic sense, but nobody should forget that they are also extremely talented and each one of them has demonstrated a strong understanding of venture capital,” Reid wrote to The Hoya. “This is not a gimmick; they are very good at what they do. And they want to win.”

Georgetown Entrepreneurship, a program that fosters an entrepreneurial environment across campus to make an impact on the world, is committed to diversity, Reid wrote.

“Diversity, equity, and inclusion are core values for Georgetown Entrepreneurship, so I am happy that this team can bring some attention to how the Venture Capital industry is trying to change,” Reid wrote.

Applications for the team opened this past fall to all undergraduate students, where students outlined their interest in venture capital, relevant skills and experience, according to Reid. Teams are then formed based on this information, he said.

Although the final competition will take place April 9, Ratliffe said she is confident that the team will continue to support one another in the future.

“Although the competition ends this weekend at Global Finals, I feel confident that our team will continue to support each other long after the competition is over,” Ratliffe wrote to The Hoya. “We are very lucky to have spent a significant amount of time with each other over the last few months and we have gotten quite close.”

Ratliffe looks forward to seeing what her fellow teammates accomplish in the future at Georgetown and in venture capitalism.

“As five women all interested in the venture capital space, a notoriously male-dominated business sector,” Ratliffe wrote. “We are extremely supportive of each other’s goals. I know this support will continue moving forward, and I am personally excited to see all of the amazing work my teammates do long after their time at Georgetown.”